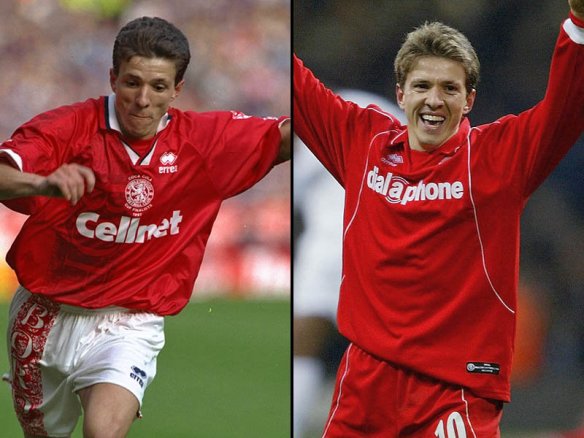 Mike Brown, reporter for Bridlington Free Press and Middlesbrough fan, looks back on Juninho’s time in the North East…

As average becomes the byword for a club stagnating in the Championship; the sparkle that surrounded Middlesbrough as it embarked on its South American adventure seems even longer ago than the near two decades since the first and best of Boro’s Brazilians signed for the club.

It was October 1995 when Osvaldo Giraldo Junior – or simply Juninho – joined a club who had broken the £1m transfer barrier for the first time only a year earlier, and had been promoted to the Premier League and signed one of England’s hottest young internationals a matter of months before.

While times were exciting under Bryan Robson, and fans were enjoying the momentum that comes with a promotion and a number of galvanising signings; this was different.

He had been in devastating form in front of an English audience for his country in the Umbro Cup. Can anyone imagine Cardiff City signing Neymar this season? It was that far-fetched.  Boro fans were at the time enjoying watching the ‘midget gems’ combination of Craig Hignett and hot property Nick Barmby. They were nice enough, all endeavour and promise. Certainly enough for mid-table stability, which would surely have been more than enough for such a success starved fanbase.

But Juninho promised to take us to another stratosphere.

While Boro fans grow tired of the lazy tabloid stereotyping that blights the town – the smoke stacks and cooling towers, the high crime rates, the low standard of living – not even in our wildest dreams could we have dreamt of bringing in a player so exotic to our unfashionable post industrial town. 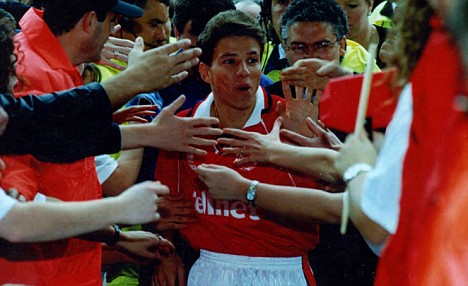 But, as is only natural, on the back of a wave of euphoria came a feeling of murky paranoia. Why had he come to the north east?  And would he care? Middlesbrough fans, shaped by a history of disappointment and near misses and raised with a particularly bleak outlook on life, are more phlegmatic and demanding than most. While skill was admired – England’s Golden Boy Wilf Mannion was testament to that – the average Boro supporter appreciated 90 minutes of graft, bravery and loyalty from a limited toiler more than five minutes of genius from an ineffective Fancy Dan.

So it would have been easy then for Juninho, only 22 when he signed, to turn up, take an inflated wage, and moan until he got a better move. Subsequently, we saw that a number of times with other players.

But while Middlesbrough surely began as a stepping stone for an ambitious young man eager to make his name in Europe, it ended as the emotional home from home for one of the most talented foreign players to ever grace the English game. By passionately embracing the local culture (mainly by enjoying  a few drinks in the local night spots) and showing incredible spirit dealing with the rougher side of English football, Juninho – or ‘The Little Fella’ as he became affectionately known – he was the embodiment of the aspirations of an entire town.

Less than ten years beforehand, a team of rough and ready yet talented local lads and bargain basement signings had rose through the divisions after being locked out of Ayresome Park. Boro were almost bust. But now, after the necessary pain, Juninho was here in a purpose built new stadium to show fans that it was worth it.

His debut, against local(ish) rivals Leeds United at the Riverside, saw Juninho set up Boro’s only goal for Jan Aage Fjortoft in a 1-1 draw. For the rest of his first season, he was an occasionally brilliant figure who was working hard to adapt to the hard pitches and the robust physicality.

After a summer in the gym, he emerged in the 1996-1997 season in a team supplemented by two more star names, Emerson and Champions League winner Fabrizio Ravanelli.
But he was still top of the bill.

Most football fans manage a roll of the eyes and a disbelieving shake of the head when they recall the story of that fateful season. Two Wembley cup finals – the club’s first ever – which of course both ended in defeat, and relegation after the farce of a three point reduction because of a postponed fixture against Blackburn Rovers.

Despite the on and off pitch drama, one constant was Juninho’s magnificence.
It isn’t very often that a player gets you out of your seat simply with the drop of a shoulder, but that was Juninho that year. A player so slight – 5ft 5inches and less than ten stone – was always likely to be good at dribbling. But Juninho allied that innate ability with exceptional balance, a surprising strength, an eye for a killer pass and a heart and tenacity so infectious that it won over most who witnessed him. His altercation with a bullying Phillipe Albert when up against Newcastle United, when the diminutive Brazilian squared up to the physically domineering Belgian with a wagging finger for a poor tackle, was just one of the reasons he was loved on the terraces.
It was with tears on the pitch – co-incidentally at Leeds United’s Elland Road after relegation – that Juninho said his first goodbye to Middlesbrough.

Despite spending less than two seasons on Teesside, there weren’t many supporters who begrudged him his big money move to Atletico Madrid. It was a World Cup year after all.
But after a vindictive tackle from future Madridista Michel Salgado, Juninho was injured and he didn’t feature for Brazil in 98.

His career failed to kick on in Madrid after that, and he returned to Middlesbrough a little slower, a little more subdued, on loan in 2000. But after a title winning spell back in his homeland with Vasco de Gama, and a World Cup winners medal in 2002, Juninho came back to Middlesbrough for a third time.

This time, he was a mixture of his two former selves. Slower and less instinctive than in his first spell after his injury, but more tactically aware and experienced, Juninho helped Middlesbrough back to a major cup final.
And this time we won. 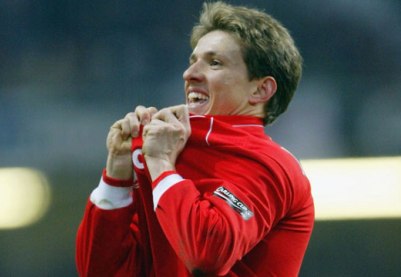 After the game, Juninho was quoted as saying that the 2004 League Cup win with Middlesbrough meant more to him than the World Cup. Was he simply saying what fans wanted to hear? Maybe. But the link between The Little Fella and his adoring public was made clear when the now retired 38-year-old  hero returned to play half an hour of a pre-season friendly in 2011.

More than 20,000 fans made the pilgrimage to the Riverside – more than turned up to all but a handful of the club’s league fixture that season. That he is often overlooked when the greatest players of the Premiership era are listed is a shame – his joyful love of the game and supreme talent should have him at the top of the list.

One thought on “Juninho, A Brazilian Number 10 in Middlesbrough by Mike Brown”