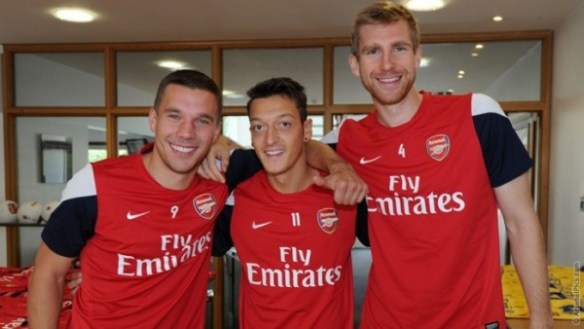 Of course, it helped that France was Wenger’s homeland and the country he knew best but the French weren’t the only group of compatriots whose relationship off the pitch was beneficial to Arsenal during these eras. In his first full season at Arsenal, Wenger splashed £5.5 million on Marc Overmars, the Dutch and former Ajax teammate of Dennis Bergkamp. This pairing proved highly creative and effective in Wenger’s first Double of 1997/8.

Creating these hubs of familiarity had several benefits. When Vieira, Petit and Anelka played together there was a collective understanding that felt irresistibly intuitive. Combined with a trustworthy English back five of David Seaman, Lee Dixon, Steve Bould, Tony Adams and Nigel Winterburn (another pocket of well acquainted countrymen), the Arsenal of 1998 were high in team spirit and fluency. Furthermore, these cliques were attractive when luring new signings to Highbury. Henry was well aware of the French enclave at Arsenal through his international teammates and a year after winning the World Cup in 1998, he joined the party. In 2000, Pires and Wiltord followed suit.

A decade on, slowly but surely, Wenger is ‘nation-building’ once again. There exists a new British backbone of Walcott, Wilshere, Ramsey, Oxlade-Chamberlain, Gibbs and Jenkinson, who are fostering a shared understanding as they mature together. While it may have partly been a clever PR stunt for this group to sign new contracts together as the so-called ‘British core’ of the first team squad, it is important for the club to maintain its natural identity, not just for its fans but also for future academy players to integrate quickly into the first team.

Whereas France was once the dominant force in world football, Wenger has now turned to the current flavours of Spain and Germany. This January he reunited Nacho Monreal with his former Malaga teammate Santi Cazorla. Although neither are nailed on starters for Spain (and that’s nothing to be ashamed of), Monreal has added valuable depth to the squad alongside Cazorla’s ingenuity. The diminutive playmaker’s presence at the Emirates is said to have allowed the left-back to settle in quickly and feel at home alongside his countryman in North London.

‘He said that the club was a massive club, the people are great and it’s really just a big family. As there’s a familiar face in Santi, I am a lot calmer about things. Having shared a dressing room with someone who’s already made this journey is a good feeling.’

Although not an international player himself, Mikel Arteta has become a senior figure at the club, purchased by Wenger as an experienced head and vital, ball recycling foundation for Arsenal’s emerging midfield. And let’s not forget his predecessors, the winger Jose Antonio Reyes and fellow midfielder Cesc Fabregas.

There is also an expanding German contingent at the club, with Özil being the latest recruit with a Teutonic flavour. Per Mertesacker signed for Arsenal in August 2011 and played a large part in attracting fellow international Lukas Podolski. He revealed that the pair had been texting in March before the striker joined the club in the summer.

Özil has so far shown great enthusiasm for his new club, and his arrival has undoubtedly been a coup for Arsenal both in terms of glamour and quality, but would the former Real Madrid star have been so tempted to sign if Mertesacker and Podolski weren’t already settled in the squad? The manager did his job in calling Özil and selling him the Arsenal vision but it’s the players who will make him feel at home, and whom helped to cast his move England in a positive light. Having submerged himself in the culture and ethos in Madrid, his switch to Arsenal can be spun as a personal victory  due the appreciative, communal feel created by the presence of Mertesacker in particular. The imposing defender was a close friend of Özil’s during their time together at Werder Breman and provided a great deal of support to the playmaker after he received criticism for choosing to represent Germany over his ancestral Turkey.

Deeper into the squad there is also Serge Gnabry, Thomas Eifeld and the hotly-tipped Gedion Zelalem, all of whom have represented Germany at youth level. Perhaps viewing Arsenal’s future as though now built around a ‘Germanic core’ would be more appropriate.

Wenger often speaks of the importance of languages. He speaks English, German, Spanish, Italian and even a little Japanese allowing him to communicate effectively with the majority of players, adding that personal touch that not every manager can. He’s a diplomat at the training ground and in the dressing room, capable of uniting these various groups into a functioning football unit.

As he knows all too well, winning trophies is a culmination of many factors. Squad depth, avoiding key injuries, the ability to win when playing badly and an ounce of luck are all needed to bring silverware. However, the importance of team spirit should not be overlooked and ‘nation-building’ can certainly aid this process. In fact, under the right circumstances it can lead to the construction of an empire.