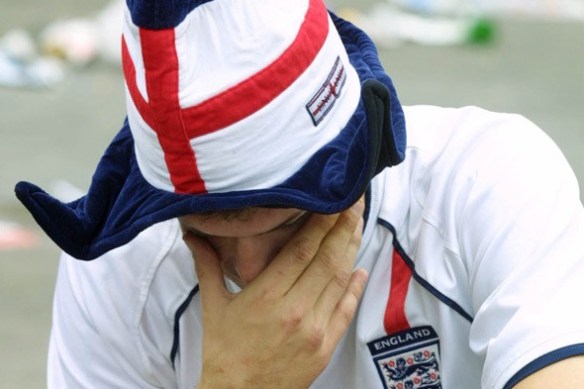 Chris Francis is in a bad place. England are on…

Gone is the daily dose of football, replaced by wasted days of inconsequential fodder.

I flick around the Sky Sports channels and try to watch tennis. Sometimes there is some rugby on. Perhaps darts. Sky Sports News is showing the same interviews on repeat. There is a hole in my life that such international breaks create.

Where there were fields of plenty, we now have a fallow crop. Two weeks should not feel this long when I am in the prime of my life.

The emptiness of an international match day has been filled with faux excitement at the prospect of seeing Shaun Wright-Phillips represent me. For years, I watched Paul Scholes play on the left wing. I saw Dennis Wise wearing the shirt I wanted to wear. Darius Vassell played up front. John Terry was my captain.

We, “the English” are in limbo. I can see the glory of heaven above me, lit up by the sun’s dazzling reflection on the Jules Rimet trophy held aloft by Bobby Moore. It is a beautiful place where men have toothless grins, and rattles chirp like crickets in the grass. Folk dance and clap politely as they marvel at the spectacle playing out on perfect green grass. Geoff Hurst is racing away into history, firing a left footed finish into a special corner of the net for England. In this golden heaven, the only threats to come from John Barnes’ body are sublime dribbles and highlight reel entries rather than the health conditions associated with morbid obesity.

Beneath me I can feel the heat of a thousand Carlton Palmers burning. In a dark corner, Jan Tomaszewski slaps Englishmen in the face with his gloves, dressed as a daemonic clown. There is a dull, repetitive thud of balls against walls, gloves and floors as David Batty and Gareth Southgate take infinite overshot penalties. Ears ring with the sound of Robert Green’s screams as he tries to wake up from his blunder psychosis, brought on my repeats of his ill-fated appearance against the USA. Graham Taylor is forced to provide an incessant commentary on the imperceptibly slow growth of a turnip patch, forever.

There is simply too much pain when it comes to watching England. It’s not just penalty failures, although there have been plenty of them. It is the promise of greatness, the hints of brilliance and the nods and winks that these Premier League stars make. And it is the dreadful lows that follow. It is hoping that this year things will be different.

I don’t want to see Keith Curle wearing the Three Lions on his chest. It hurts me deeply to think we had Matt Le Tissier and never showcased his talents to the world. I can see that ball looping over David Seaman’s head like a Frisbee heading in to the sea, as Ronaldinho chuckles at the humiliation he was wrought against a once great goalkeeper.

At least with my club side I don’t have to harbour the same flighty fanciful dreams. At least with them I don’t have to be disappointed time and time again by a dozen supposedly outstanding individuals. Instead I can wile away my time under the satisfying impression that my team are generally pulling in the same direction, if not always the right one. Age has taught me this sad maxim – club is more important than country.

There is a lack of togetherness at all levels when it comes to England. Half the players don’t even like playing with one another. Most of them can’t wait to get back to the loving embrace of the Premier League bubble. Or so it seems from afar, and it is the same with the fans. I support Leicester and England. Never the other way round.

Watching the England team messes with my zen.

I want to be a good boy, and follow England in the right way but I end up swearing in frustration in a pub alongside dozens of other idiots doing precisely the same thing. One of the problems with a football match is that it gives you just enough time to drink just too many pints to be sensible, and with England you have to arrive early to ensure you get a good spot. This of course adds an extra thirty minutes or so of boozing before kick-off, giving you plenty enough nervous sips to have knocked the whole thing back. Repeat over a two hour period from then on, and you will have made your way through four or five pints. That is easily enough for me and those around me to start losing their shit, especially if England are also losing their shit live, high and in widescreen – sometimes in 3D – across the screen covered walls of the pub.

The England team is too exposing. It shows up the flaws in players’ games that are often masked in the well-blended familiarity of club football. There is a lack of Tao. This doesn’t exist at every club, of course, but managers at that level at least have the means to find a ying to another’s yang.

A club manager can bring in a player to complement one of his stars, the England manager simply has to force them to fit. Xabi Alonso may as well not exist when it comes to making the most of Steven Gerrard at a World Cup or European Championship.

It is like trying to complete an old jigsaw puzzle found in the loft; you end up with left over pieces from other boxes, broken ends, and chopped off little bits. It exposes us too as fans. My emotions become frayed. Before a game I am a living, functioning and sane member of the community, but once England are on I am nothing of the sort. I am a raging, ranting moron just like everyone else. Opinions don’t emerge as they should. They spurt and splash in to whosoever is in the way, knocking over drinks and shouting down the bloke in the Norwich shirt claiming Grant Holt would have buried something. I slam my fist on the bar. I order another drink.