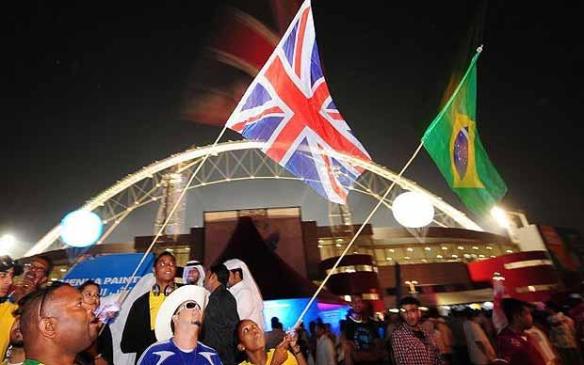 The False Nine is proud to announce the launch of The Samba Series: an exciting and comprehensive new series featuring every single Brazilian to ever play in the Premier League – the ideal way to build up to the 2014 World Cup this summer.

The Samba Series is the definitive inventory of Brazilian footballers who have played in England since the formation of the Premier League in 1995. From Juninho to Ilan, from Kleberson to Douglas Rinaldi, they are all here and their stories recounted from the fans who knew them best.

This isn’t simply a collection of memories, but  a wider appraisal of the fortunes of the Seleção, charting the success of these exotic imports to the English game beginning with the arrival of Isaías on these shores in 1995 and the pioneering Mirandinha who spent two years at Newcastle United from 1987, at a time when the reputation of English football was at its lowest ebb.

Is it the tough tackling midfielders, in the guise of Dunga, who have prospered more than the flamboyant tricksters, the Zicos, that we normally associate with the heritage of the five-time World Champions?

Have the most successful Brazilians on these shores adhered to the ‘samba’ stereotype?

These are questions that we hope to answer.

Were you excited when your club signed their first Brazilian? Did the end-product live up to the glamorous passport? Does the old adage ‘The English invented it, the Brazilians perfected it’ hold weight with regard to their influence on the Premier League?

This is the first of its kind – a comprehensive study of every Brazilian to have played in England. We have pooled together a large team of contributors from across the globe to profile their club’s Brazilian representatives, ranging from the more personal to the more anecdotal.

The Samba Series will begin by looking at the three pioneers who got the ball rolling – Mirandinha (Wednesday 11 September), Isaías (Friday 13 September) and the legendary Juninho (Monday 16 September). We will then continues on in order of era, as we gradually build our way up to the present and the next generation of Fernandinho, Paulinho and Willian.

Some players, who have had a profound effect on English football, may merit longer profiles than others, whilst there will be special room for Emerson Thome – the Brazilian journeyman of English football. Readers can also expect to see a number of feature pieces on the Premier League’s Brazilian players and their legacy on the game both here and abroad.

Beginning today, Monday September 9 2013, The Samba Series will be posting up profiles of every Brazilian to play in the English top flight over the coming weeks and months!

Featuring a stellar cast of contributors including Musa Okwonga of The Independent, ESPN and The Blizzard, Sachin Nakrani of The Guardian and The Anfield Wrap and Steve Graves of The Liverpool ECHO and The Anfield Wrap, the Samba Series is sure to be the one pre-Brazil blog series you don’t want to miss out on!

To kick things off, TFN’s very own Rob Brown has written a fantastic overview of the Brazilian game which you can read here.

Get involved with the Samba Series on Twitter using the hashtag #SambaSeries.