United ended the transfer window in a manner that we are not used to seeing. Yes, there have been close calls before but in the most obvious case of Dimitar Berbatov, he was at least the man they wanted all along. Thiago Alcantara, Cesc Fabregas, Ander Herrera, and Leighton Baines drifted through the open window and on in to the night’s sky, like the mere dreams they turned out to be.

Marouanne Fellaini is a very good player. But he is certainly not the only player that United set out to sign at the start of the window. It seems obvious in hindsight that they wanted Fellaini and one other. That other sort of player was Thiago or Cesc; someone who could be viewed as a long term replacement as well as a short term fix for the loss of Paul Scholes. Scholes was the greatest of these types of midfielders we in England have known for 20 years.

While there has been consistency in the selection of Tom Cleverley in this role thus far, he is not at the standard required to be the first choice. As the match with Liverpool on Sunday highlighted he is not yet the player to drag a team with him through consistent excellence.

Fellaini will answer some of the questions that the opening fixtures have raised, including a lack of threat in terms of goals from midfield, and the need for a better link between the deep-lying Michael Carrick and the more advanced players in the midfield and attack. He is also a huge physical presence, and a player not afraid to stand up for himself in the centre of the park.

There is always a minority in any window who protest about the quality of the signings, or the reach of the scouting network, or the influence of the executives. But it seems that this transfer window has seen a sea-change in how United fans have reacted. There is panic in the air. Questions that would once be underscored with a ‘Fergie knows what he is doing’ have lingered longer than before. While they may have disagreed about the outlay on Ashley Young, there was never the vitriol aimed at David Gill that there has been at Ed Woodward. 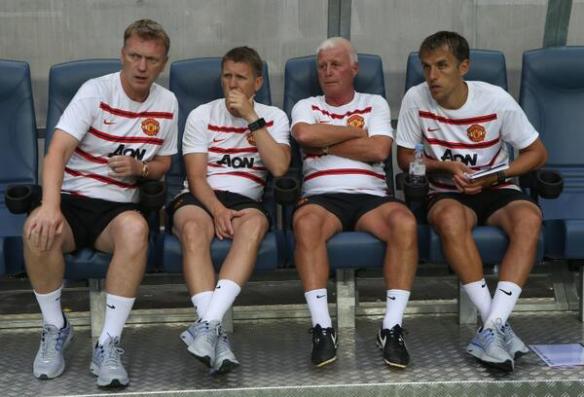 Here lies one of the key differences. The excellent Nooruddean Choudry (@beardedgenius) pointed out on twitter that this was a unique transfer window for United. New manager, new Chief Exec, and a shed load of extra money for every team from a new and bumper TV deal. United seem to have failed at a senior level to have recognised this early enough and have failed to support Moyes properly. In much the same way that since David Dein left Arsenal, that club has struggled to keep their transfer dealings under wraps (Suarez, Higuain are just two examples from this summer), it was common knowledge in the press who United were after. This summer there was an openness about who Moyes wanted that is striking in its peculiarity.

There was a clear lack of a coherent plan. The rushed bid for Fabio Coentrao came once they finally realised Everton could only afford to sell one of their prized assets, not both. There seems also to be a simple lack of common sense in the way they went about nailing down Fellaini, who would have been available at a cheaper price, no negotiations necessary, only a matter of weeks before due to a contracted buy-out clause.

As a fan of a lower league club, the transfer window is a time of detachment from reality. If we sign someone ‘great’, it’s certainly not going to be anyone outstanding, and will not rock the football world. If we lose someone, then, yes, that could potentially induce anger.  But there is a philosophical way of being at this level. Players come, players go, the season carries on. Thankfully, this season, neither of these were concerns as the window slid in to place for my team. If you don’t support a Premier League club, you watch on with a smile on your face, as names of exotic players are thrown about by Jim and Natalie. You smirk as the totaliser rears its enormous head and Dharmesh Sheth frantically and in his peculiar staccato style talks you  through what the ‘Sky Sources’ have told him. He is a medium of the great money demons that run this ridiculous side-show.

As a non-United fan, as a football lover without an honest care about United’s rivals, it has been quite easy to notice that change in attitude though that has manifested itself in the initial reactions of United fans online. As a simple observer I can see the wood for the trees. The worried faces emerge the closer you get to that mass of red. You are a Lowry crossed with a Munch.

An indifferent start to the league season (taking four points from nine) should not be a real problem. Moyes is a good manager, who it seems inconceivable will not be a success of some sort in Manchester. However, that air of superiority that surrounded the club seems to be diminishing already.

In a perverse way, there is a certain strange pleasure in seeing Manchester United fans genuinely fret. These are the first realisations from fans who have known little but success; that their beloved men in red are no longer the favourites for everything. Reality is dawning on them that you can’t always get what you want – even if it has seemed that way up to this point in your football supporting life.