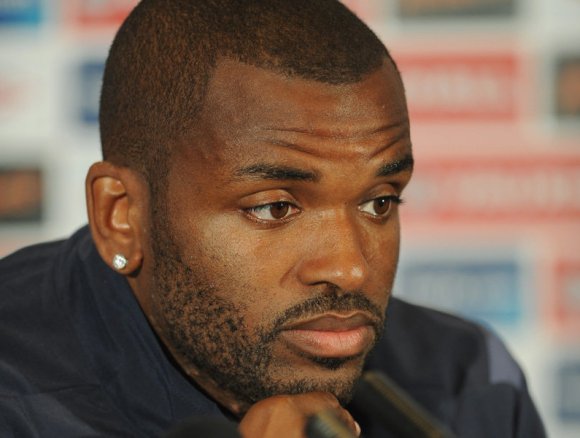 Such a goal scoring record, in line with the main front men at the two clubs competing for the Premier League title, should surely have made the striker a commodity hungered after by all of the top clubs in England, if not Europe. Instead at the time he was being transferred from Sunderland in 6th to Aston Villa in 17th in the Premier League.

Darren Bent’s top-flight goal scoring record is undoubtedly proven, having notched up 93 goals in the Premier League during his career and 179 in all competitions. He is, cumulatively, the most expensive English player in history, costing his clubs a combined £55 million in transfer and loan fees.

Despite this demand for and display of his apparent qualities, his time at Spurs and Aston Villa has left a trail of failed expectations, of the perception of someone who never quite made it to the level that he should have (a position that Wayne Rooney may soon find himself in if events do not change in the coming months.) 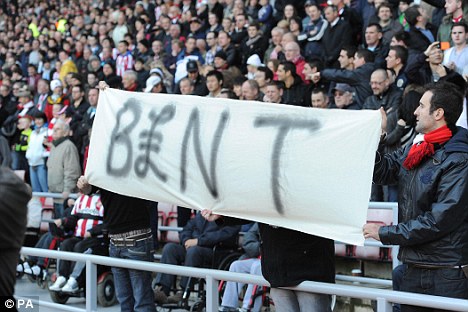 A pacey striker who hangs on the last shoulder of the defender with a predatory prowling prowess, Bent has undoubted quality as a finisher.  As opposed to a good deal of modern Premier League strikers, who are athletes first and finishers second, Bent has an unerring quality to his shooting when he is confident and in good form. He isn’t a huge aerial presence and lacks the physical power of a Drogba but his record in leading the line over his career speaks for itself.

At Charlton, Bent managed 32 in 68 starts in a struggling side. Charlton were eventually relegated in 2007 despite Bent himself scoring 15, prompting a £16.5 million move to Spurs. Bent at this stage was considered to be a hugely promising young English striker with an opportunity to really make his mark. Certainly more was expected of him in the short term than Spurs other signing that transfer window, young left back Gareth Bale.

However Bent’s time at Spurs did not go as he would have hoped with only six goals in 27 starts in his first season and only eighteen goals by the end of his Tottenham career. Harry Redknapp had even claimed of one of the striker’s misses that “my missus could have scored that one” after Bent missed a late header during Spurs’ 1-1 draw with Portsmouth in January 2009. Frustrated Bent lashed out on Twitter telling chairman Daniel Levy to “stop fucking around” in prolonging the negotiations for his transfer to Sunderland. His time at Spurs was not a happy one.

“Some people said my mind got turned and my form dipped, but I don’t believe it. All strikers go through periods when you score goals and don’t score goals. In the end the maximum I went without a goal was five, which wasn’t bad.” – Darren Bent

His talent had not disappeared; merely it was not the right sort of talent that Spurs were looking for. Joe Jordan made the claim that “Darren has always been a player that has scored goals. But here he was competing with two or three other  strikers who were equally good.”

Bent’s unerring finishing ability is backed up by his career statistics but he has never been a creative player. He has never been one to be involved in elaborate build up play and he has rarely worked well with a strike partner.

After his £10 million move to Sunderland, Bent plundered 32 goals in 58 league appearances, again in a side that perennially struggled in the bottom half. Bent suited a team which built the system around him.

Taking advantage of his pace, allowing him to play upfront on his own as a mobile forward or with a target man such as Kenwyne Jones knocking the ball down, Bent flourished. He was not expected to massively contribute to build up play; just spring the offside trap, pop up in the box and finish the job. From a results based perspective Bent had proved once again that he was capable of being an outstanding player.

“Countless times, Bent would pop up in the right place at the right time; it reached a point whereby onlookers needn’t even wait for the net to bulge, so sure was his finishing acumen. He scored against pretty much everyone: Bolton Wanderers, Chelsea, Hull City, Burnley, Wolves, Manchester United, Liverpool, Arsenal, Portsmouth, Everton, Blackburn Rovers, Birmingham City, Tottenham Hotspur, Colchester City, Manchester City, Newcastle United” –  Simon Walsh, the Roker Report 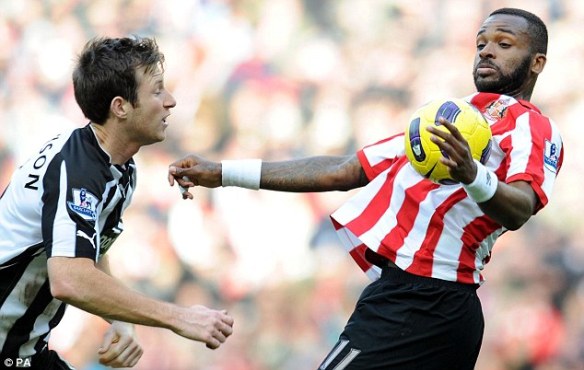 Bent, having proven himself once again, was keen to maximise his potential and reforge his reputation. Seeming to have learned from his mistakes at Spurs he began eyeing the a transfer to Aston Villa.

When I was at Charlton, I could have gone to West Ham for double. But I chose to go to Tottenham for footballing reasons….I am sure people will have opinions on why I have joined Villa given where they are in the table. But Villa are in a false position. It’s a massive club with massive tradition and history and I want to be part of it.” – Darren Bent

Bent made an immediate impact, hitting a fine vein of goal scoring form suggesting that his assumption had been the right one. Then his ammunition ran out. By the end of his first season at Villa, Kyle Walker, Ashley Young and Stewart Downing had all left the club. They had provided every one of his assists.

Villa became much more negative under Alex McLeish and Bent’s form suffered as a result. Since he was unable to rely on any regular service Bent had to drop deeper to try and find scoring opportunities, something that did not suit his skill set. His standing began to fall once again.

Under Paul Lambert a much more radical approach underlines Villa’s style of play. High pressing football with players expected to be mobile enough to drop into other positions and contribute to build up.

There is no place for a predator in the mould of Bent in such a fluid system. Bent still scored 21 league goals in 45 appearances at Villa and that isn’t a bad record by any means, but his card was marked. Once again he was not in the manager’s recipe, the wrong player at the wrong time.

“Bent has been told to move out of the first-team dressing room at the training ground and ordered to train in a small group of outcasts alongside Stephen Ireland and Alan Hutton. He has also been informed he will not be considered for selection for any of the club’s pre-season friendlies and will not be included in any squads should he remain at Aston Villa after the close of the summer transfer window.” – Luke Edwards, Telegraph sports writer

Bent instead has been loaned to Fulham to join a team that now includes the likes of Stekelenburg, Berbatov, Ruiz, and Taraabt alongside a mix of youth team players such as Kasami and Matthew Briggs. Fulham’s experiment could be an interesting one that potentially gives Bent one last chance to leave an indelible mark of his own quality on the perception of his career. Another chance to prove the doubters wrong as he has before.

Looking at Bent in comparison with another top flight English goal scorer can give us an insight into how the game has changed to Bent’s detriment. Andy Cole is only behind Alan Shearer in terms of goals scored in the Premier League, with 187.

When Ferguson bought Andy Cole to Manchester United his strike rate at Newcastle was a phenomenal 68 in 84. His poaching instincts were unquestionable. Yet his first season was punctuated by severe teething problems. Both Cole and Bent could be referred to as ‘confidence players’ as surely all strikers, as opportunists by trade, have a right to be called.

Cole had to try and adapt his game to be more that of a total  footballer and less of a fox in the box to suit the evolving needs of the emerging treble team; the needs of a sweeping fluid attack. Ferguson was a great enough manager to believe that he could change a poacher into a player. Yet despite Cole’s club success Glenn Hoddle’s remark is the one that people remember the most, that Cole needed 4 or 5 chances in a game before he could score a goal. 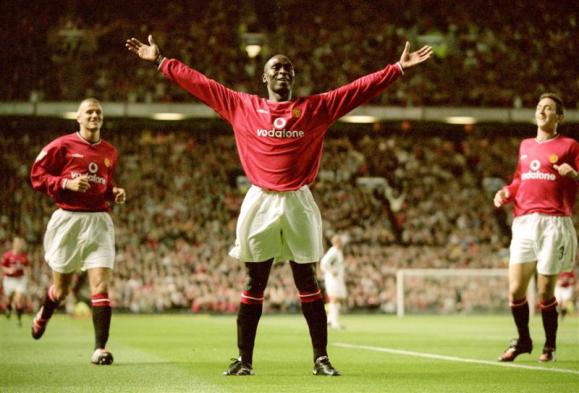 Cole’s goal scoring record is second to none and yet due to his limitations as a ‘true footballer’, one capable of the mobile, perpetual movement and elegant build up play of a Drogba or an Henry he is not remembered as a true great. Once shorn of the service of Ginola, Beardlsey, Giggs and Beckham the goals began to slow. Nor was he never regarded as an integral part of the national team.

This memory and the fate of players like Darren Bent or Michael Owen is perhaps indicative of how difficult it is to compare players of different eras. Could we say that the man who has scored the second most goals in Premier League history would perhaps be the equivalent of Darren Bent in today’s footballing world? That he would be a man with an admirable scoring record but that to many he would be a misfit incapable of adapting to a technical high pace game that the modern game requires.

Should we then be so harsh of Darren Bent and his particular skill set? Can we question a record of 93 Premier League goals in the modern era? His skills may not be what the modern game needs but there will always be a place for goals in football. Talent remains talent; it just needs a framework that fully takes advantage of its potential.

“My record speaks for itself,” he says, “and when I have finished it will all be down there in black and white for people to see.” – Andy Cole

3 thoughts on “The Curious Case of Darren Bent”