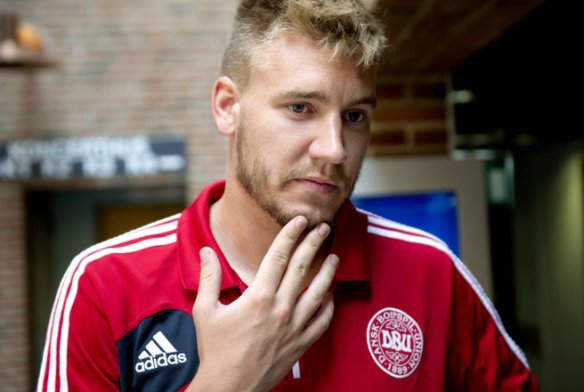 As the Danish striker’s time at Arsenal comes to a close, Hugo Greenhalgh wonders where it all went wrong for Nicklas Bendtner…

In the same way that a stereotype can often contain a heavy dose of truth, a brief, personal anecdote epitomised all the expectations of a certain footballer. On a recent flight back from Copenhagen I was convinced I had seen Nicklas Bendtner boarding the same plane. But what was a Premier League footballer doing flying EasyJet? Arriving at London Gatwick I called, ‘Nick’. He turned around to reveal a puffy-eyed and scruffy visage, topped off with a backwards baseball cap. ‘Where have you been?’, I asked.

While Las Vegas is often referred to as the ‘Capital of Second Chances’, Bendtner has been given one too many at Arsenal. The ’24 hour party people’ lifestyle of the Danish playboy was excusable when he was a teenager, but Bendtner’s antics have carried on deep into adulthood. The press in his homeland had picked up on an Instagram photo he had posted, taken during his recent trip out to Nevada posing with Snoop Dogg, complete with the caption: “So what we get drunk #so what we smoke weed #we are just having fun #thats how its supposed to be #living young and wild and free!”. Bendtner may have been quoting lyrics to a song but that didn’t really matter. After all, he’s not a boy anymore; he’s 25.

In the past few years, Bendtner has become inseparable from an unjustified personality cult of his own making. He marketed himself as ‘NB52’, in the same manner that Cristiano Ronaldo is ‘CR7’. In one particularly self-righteous tweet, he told his followers ’52 is going to sleep’. (Thanks for that Nick, probably time for me to hit the hay too). He created his own jewellery range called ‘Bendtner Jewellery’. He told interviewers he was ‘one of the best strikers in the world’. His Paddy Power boxer shorts became one of the defining images of Euro 2012 (even if UEFA’s €100,000 fine only added to the absurdity). 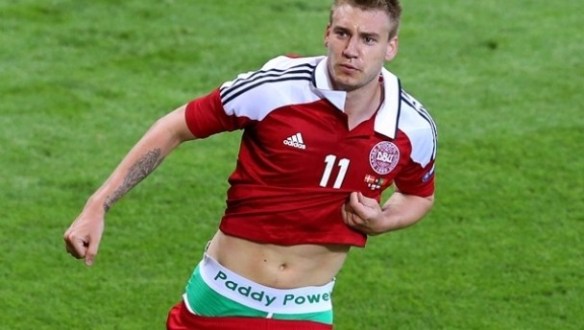 It’s easy to mock Bendtner. His oversized and misplaced sense of ego make him an easy target. Of course, he wasn’t even that bad at Arsenal. There were quiet mutterings last season that he would be handy to have around, simply as another attacking outlet. As a youngster he did show promise. His headed winner against Tottenham in the December 2007 North London Derby will not be forgotten, nor will his sublime goal in the League Cup against Ipswich in January 2011. He also has an impressive international record, with 22 goals in 55 caps. However, at present Bendtner is serving a six month ban from the national side following his recent arrest for drink driving.

Arsenal have spent most of this summer trimming their squad, rather than adding to it, and getting rid of a considerable amount of ‘dead wood’ that had accumulated during these belt tightening years of transition. Andrei Arshavin, Sebastien Squillaci, Denilson, Andre Santos and Vito Mannone have all left the club, while Johan Djourou and Francis Coquelin have been loaned out. The task of moving on Bendtner has proved noticeably more difficult. A deal with Eintracht Frankfurt seemed all but finalised but broke down after the German side could not agree personal terms with the player. Perhaps he feels he should be getting paid more or playing for a bigger side; maybe he should show some gratitude to a club willing to take a punt on such a liability.

No one has a divine right to make it at Arsenal. While the club can claim to have a strong, well-run academy, it’s rare for graduates to enjoy a sustained run in the first team. Bendtner would do well to look at two examples of other forwards the club has let go in recent years. Jérémie Aliadière had an injury-plagued, 11-year stint in England. He had had limited opportunities at Arsenal and joined Middlesbrough in 2007, but continued to struggle with injuries. In 2011 he signed for FC Lorient and last season enjoyed his first fully fit season of his career, scoring 15 goals in 29 appearances in Ligue 1. The Mexican trickster Carlos Vela also saw his future elsewhere. After a year on loan at Real Sociedad, the move was made permanent last summer. Last season Vela played a key role in guiding Sociedad to 4th in La Liga; ironically they could now face Arsenal in a Champions League Qualifier.

There can be a life after Arsenal but unfortunately for Bendtner it doesn’t seem that the humility required is  a word in his vocabulary.