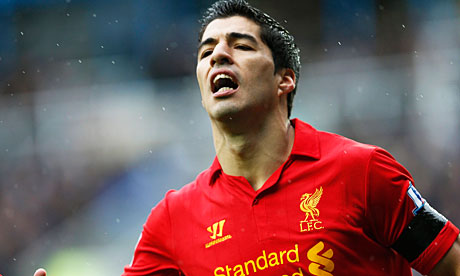 A broken promise and broken hearts – last night Luis Suarez confirmed fans’ worst fears when he broke his silence to make public his desire to leave Liverpool Football Club. Claiming that the club had promised him a sale should they fail to qualify for the Champions League last season, he told Sid Lowe of The Guardian:

“[Liverpool] promised me something a year ago just as I promise that I would stay and try everything possible to get into the Champions League. They gave me their word a year ago and now I want them to honour that. And it is not something with the coach but something that is written in the contract. I’m not going to another club to hurt Liverpool.”

Or should that be, “I’m going to Arsenal” since the North Londoners are currently the only club to have made any official approaches or noises about signing the forward. According to a sizeable portion of Liverpool’s fans and commentators sympathetic to the club, not only is the wrist kissing pariah the greatest footballer currently playing in the Premier League, but one of the top five or ten players in Europe, if not the world.

The lack of personal accolades, either in the form of the various English Player of the Year awards and nominations for FIFA’s end-of-year gongs, are excused by a range of mitigating circumstances, from his lack of exposure in the game’s blue ribbon European competitions, to grand, paranoid conspiracy theories of a media agenda created to drive sweet, poor Luis into darkness and exile and once again sabotage Liverpool’s chances. In fact, over the past two and a half seasons many old chestnuts have been aired, from references to the so-called “Fergie Association” to tenuous and tasteless attempts to link bad press around Suarez to the real injustices that have been perpetrated against both Liverpool the football club and the city. Now his urgent need for foreign asylum to escape from the evil British press has dissolved into a plea to play abroad in the Champions League, followed by the sobering moment of clarity that a move to another Premier League team – a direct top four rival no less – may have been his aim all along. There’s clearly a lot of anger, sadness and confusion over who’s to blame and how to react amongst those who still hold a torch for the Uruguayan.

After all, his most dogged supporters will never accept the charges brought against him for his behaviour towards Patrice Evra, but regardless of the countless defences and attempts at sophistry deployed to discredit his accusers, Suarez’s actions certainly fit a repeating pattern of malfeasance at least partly perpetuated by his ability to tug at the heart strings of his admirers in order to absolve himself of blame or responsibility. Racist language, eye gouging, stamping, kicking, biting and tackles with intent to maim other professionals: until recently, the response of fans blinded by heated rivalries, a sense of persecution and a creeping inferiority complex was to throw down the rose tinted shutters and claim that Suarez’s reactions were a product of his environment, like a rat leaping for the jugular when backed into a corner.

“What do you think they’re smoking over there at Emirates?” tweeted Liverpool owner John W Henry last month; a pertinent question but not in the manner he meant it considering the deafening silence from all other supposedly interested quarters. Arsenal may have offered up the now infamous amount of £40,000,001 to trigger the contract clause (and John W Henry’s tweeting) but where are all the other bids for Luis Suarez? Wenger’s highly specific bid was informed by an interested third party keen to make potential buyers aware of a potential get out clause for the Liverpool striker. For a player supposedly the best in his league, who suffers only due to the bullying tactics of the media and rival lead football authorities, and who wishes to leave this summer, why aren’t the biggest clubs in Europe queuing up to liberate Suarez from the awful conditions and controversies apparently thrust upon him. The silence is deafening, and suggests managers who may have formerly been interested have now wised up to his character and potential to harm his teams.

After ridding themselves of Mourinho, why would Real Madrid wish to recruit another self-destructive figure of controversy to endanger their self-projected image of the glamorous yet respectable gentlemen of world football? Similarly, the Uruguayan would likely bring as much chaos as flair to the newly calm and controlled “holistic” project at Manchester City. Over in the Bundesglia, Guardiola already has enough to contend with when it comes to PR of his own, and it’s unlikely Bayern Munich would stand for Suarez’s antics. The Bavarian club’s board are perhaps even more image-conscious than their counterparts in Madrid, regardless of the ethics of their recent transfer dealings and Uli Hoeness’ tax bill. It’s unlikely that any of these clubs would happily sign up a player to spend a notable amount of time each season suspended either.

Oh how we laughed when Suarez hand balled on the line to deny Ghana in the summer of 2010. Few truly begrudged his actions, and some even enjoyed the sheer cheek of his sly gamesmanship, as well as his celebrations following the resulting missed penalty. The holier-than-thou attitude of Lineker and co (“we don’t like to see that sort thing in the modern game” etc.) was enough for many people to at least enjoy the drama of it all. Back then, admired from a distance during his time in the Dutch Eredivisie, Suarez was but a foreign curiosity offering unbelievably sneaky pantomime antics and impressive skills – the perfect sort of player for viral videos, 101 Great Goals stories and regular rotation across the various football banter accounts on Twitter and Facebook.

Perhaps familiarity breeds contempt, or the sight of seeing Luis Suarez work up close is rather more ugly and cynical than the almost romantic idea some had of a loveable, Maradona-esque rogue. Speaking from outside the Anfield bubble, it seems that it’s these sorts of perceptions that Suarez’s supporters still see him through. Perhaps this is the image that persists within the mind of Arsene Wenger: the last man standing in a race of one.

Of course, having already failed to land Gonzalo Higuain this summer, Arsenal’s pursuit of Suarez could yet turn out to be merely the heavy lifting for a last minute hijack from Madrid or another canny powerhouse. Should Wenger miss out on the Uruguayan in the event that he does leave Liverpool, such a setback would surely cement his withering reputation as an incompetent deal broker, and further underline how damaging the departure of former vice-chairman David Dein was to the North London club.

The papers may say that Suarez favours Madrid, but is anyone outside of the Emirates favouring Suarez?

10 thoughts on “Luis Suarez to Arsenal: where have all the suitors gone?”