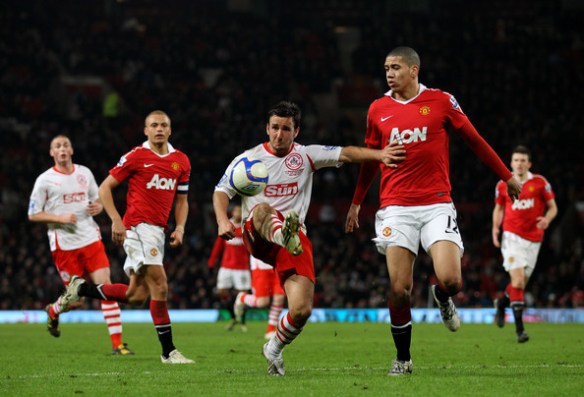 Understandably, Tubbs’ star quality infront of goal was attracting interest from higher tier sides. Leicester were apparently monitoring his progress but the striker stayed loyal. At the end of the 2006-2007 campaign he signed a long-term deal and the following season went onto net his 100th strike for the club and finish the leading goal-getter.

In 2008, Salisbury were struggling financially and they were forced to offload some players to free up the wage bill. This meant Tubbs was loaned to Bournemouth – for whom he featured back in his school days. It turned out a meaningless move in terms of enhancing the player’s development as he was hardly played.

Amid plenty of transfer speculation, Tubbs remained devoted to his hometown club. He continued to find the net regularly and in 2009-2010 he was the protagonist in lifting Salisbury out of the relegation zone after a points deduction for administrative reasons. In 2010, though, they were handed a hefty blow; dropping two leagues for allegedly ‘breaking rules’.

Tubbs was patently too good to be playing in such a low division. He had been instrumental in keeping Salisbury alive; the cog, the leading light. He had kept solely committed for seven years but in the summer of 2010, the inevitable happened and he departed for pastures new on amicable terms.

But who had he joined? Then-Conference National outfit Crawley Town. And for a club record fee too, reported to be around £55,000. Tubbs didn’t know it, but this was a career-defining move. Crawley, backed by wealthy owners, were irresistible in the 2010-2011 season. Not only did they win the Conference title (thus gaining promotion to the Football League) and historically reach the fifth round of the FA Cup (narrowly losing 1-0 to Manchester United at Old Trafford), but Tubbs produced a seriously impressive haul of 40 goals in 48 matches and was awarded a place in the Conference Team of the Year.

For everyone involved with The Reds, that season was a very special one. Tubbs had played a starring role and under the stewardship of manager Steve Evans had blossomed into a brilliantly all-rounded forward. Of course, there were still flaws in his game but considering he had initially been accustomed to non—league conditions, Tubbs made the jump to Football League life with relative ease.

This upcoming campaign was especially significant for both club and player. Crawley were heading into the unknown in the Football League (first time in history) and Tubbs needed to prove he wasn’t just a one-hit wonder and could sustain his goal scoring exploits.

He did. Continuing to score week in week out, Crawley benefited hugely and at the end of 2011 were at the summit of League Two. The January transfer window was beckoning and it was a period of apprehension and nail-biting for the supporters. Was there key asset going to be lured away?

A host of Premier League teams were reportedly interested but the allure of the top-flight clearly didn’t wipe off with Tubbs, who had a considerable decision to make. Should he decide to join a more elite team then he faces the possibility of not getting much first-team action and merely being used as a squad filler. But should he decide to remain at the Broadfield Stadium then he faces the possibility of stagnation and a potentially rued opportunity.

He had been playing out of his skin with Crawley and with the club in a very healthy position domestically, all the right things were in place. But at 28, if he didn’t grasp a fresh move with both hands then he could be deemed a fool. There were all these questions and issues for him to tackle.

As the transfer window passed with each day, it looked increasingly more likely that Crawley had staved off any potential buyers. But on 30 January – with just a day remaining until the conclusion of the market – a deal was struck. It was a case of da ja vu as Bournemouth – the club he supported so dearly as a boy – launched a £800,000 bid which Crawley just couldn’t reject. He’d gone from bench warmer to main signing in the space of just five years.

This was a little bit of a shock. He had only moved up one division and Bournemouth’s ambitions are not on the same level as Crawley’s. But the temptation of signing for your boyhood team had obviously meant too much. Bournemouth had known that and took advantage. Tubbs made an immediate impact scoring on his debut. “On your debut you want to try and get your first goal as quickly as you can and I was lucky enough to get mine tonight. It was great to be back. This is my home-town club and the one I supported as a kid. The standing ovation at the end was nice.” He told BBC Radio Solent.

For the people at Crawley Tubbs’ absence was still getting some use to. It was particularly strange for an emotional Evans who apparently “shredded a tear” after forming such a close bond. Crawley prevailed in clinching the League Two title that season but Evans had announced he would be parting company a few months before. “In my opinion, how far can I take Crawley Town? League One certainly, but beyond that I was not so sure”. He said.

His departure was partially stemmed from Tubbs’ and fellow striker Tyone Barnett’s exits. Assistant coach Paul Raynor also made way with immediate effect due to the same reasons. As Crawley began preparations for embarkation into League One and a new manager, Tubbs was trying to find his feet at Bournemouth.

He had half of the 2012 season to make a mark and gel with his teammates but this was hindered when he underwent a groin operation in April which ruled him out until the summer. In 2012-2013 it was all about recovering and he was used as a bit-part player. At the end of the term, Tubbs had made 35 appearances (26 off the bench) since his arrival at The Cherries.

His injury had seriously hampered his chances of playing in the first-team and he just couldn’t find the sort of potency in his boots that made him so prolific infront of goal with Crawley. He had been signed for nearly £1million and there was extra pressure on him to deliver. He didn’t. It wasn’t exactly his fault.

This summer has produced another chapter in Tubbs’ footballing career. Rotherham, home to the 12,000 capacity New York Stadium and tellingly Steve Evans who is the manager, secured his services on a loan basis until the end of January last week. He will be reunited with his old boss but the move offers little to Tubbs in the grand scheme of things. It’s another loan, another uncertainty and it prevents settlement; something the 29-year-old really needs. He needs to reestablish himself, like at Salisbury and Crawley, as these short-term loans are no good.

His career has meandered, spiraled into a tailspin. It’s a genuine shame to see such a talented footballer go to waste. In retrospect, maybe he should have stayed with Crawley. Maybe his stock would have risen instead of his career taking a decline. But he wasn’t to know. Now Tubbs must reignite his career, whether Rotherham will enable that is questionable.

But what is certain is Matt Tubbs is a Forgotten Man. And that, I’m afraid, is indeed a great waste and shame.