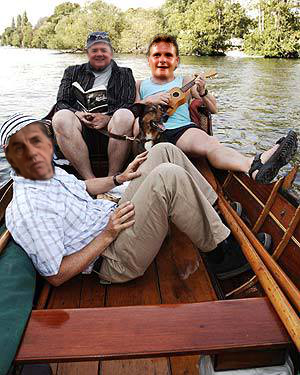 David Wild invites you to enter the world of Reality Football…

Have you ever wondered what it would look like if Robert Huth took his family out for a day at Wacky Warehouse? How you’d feel if you saw Per Mertesacker enter a room and then forget why he’d just come in? Or what would run through your mind if you saw Emmanuel Adebayor running for a bus but just missing it?

In a new segment The False Nine explores the (completely hypothetical) possibilities of what could happen if footballers were released from their ivory towered isolation and set loose upon the real world. Welcome to Reality Football.

Situation – Three men meet just off the coast of Newcastle and set off on a morning fishing trip.

Many years later, as he faced the firing squad at the BBC performance evaluation panel, Mark Lawrenson was to remember that distant afternoon when his friends took him on that fateful fishing trip.

It was a cold spring morning on Tyneside where three huddled shapes met on the beach, preparing their boat for a day’s fishing. Joe and Paul could hardly contain their excitement. Mark could.

Mark: I don’t even know why we’re going today. I mean you two call yourselves fisherman, but when you get out on the boat you’re like a cow in a field, you just don’t know what to do with yourselves.

Paul: I cannae wait ye know like. I been looking forward to this for ages. I’m hopin ta catch enough fish to put the whole of Grimsby out of business like.

Mark sighed. He knew that spending the day with these two cretins would bring back the cold dark veil of depression that was usually reserved for his darkest moments spent with those b******ds who made him talk about football every Saturday.

He felt a wave of despair then just thinking about being in the studio, having to watch the game he loathed so much again and again. He tasted the familiar taste of disgust in his nostrils, he remembered all the times he had had to talk down to all those around him simply because he knew his onions and cut his cloth accordingly. It was hell for Mark just looking at a ball these days.

Joe:  Listen now Mick, I won’t have you dragging down another fishing trip with your miserable antics. That’s exactly the kind of attitude that made me give that twit Shearer the chop… stupid idiot, hasn’t got a clue about coaching, calling ME a disgrace.

Joe: I have been a manager for 35 years. I have won every award there is in football as a player. I was that John Roman Racquel-May of my day. I’m head and shoulders above every other king of every other club in the galaxy. LAUGHING STOCK he said.. I’ll show him and all of Nou-Campastle.

Mark could feel the white hot burning sensation of pure disdain bubbling within him. He felt it corroding his very being, and yet… he was just so tired. For years a war had been fought in Mark’s soul, between a flaming hatred and a deep, vast and cold sense of oblivion. For Mark there was nothing left in his dreary day to day existence but his football commentary, which he had always despised. The lazy cliché had become his shield; an expression of his utter contempt for football and footballers just mild enough to not dare break the gloomy, fogged up, glass cage that was his career.

Mark: Arguably Joe you were the best manager Newcastle and Nottingham Forest ever had, there’s no denying that. You can be as good as you want to be, that’s how good you can be.

Paul: Aye don’t worry Joey lad. I brought a fishing rod too, we’ll fish together, I’ll have a chat with yers…..just talk and that, cause I think I can help yas both through this cause I’ve just been in a car crash I’ve just hit the wall at 90 miles per hour. I survived that I’m sure I can survive a bullet.

Paul (humming) We’ll build you up, won’t knock you down everybody do their thing.

The three men cast their lines and began fishing. The sun hung high in the sky, baking the boat in a white hot heat; the air only disturbed by the sound of Gazza humming Fog On The Tyne. As the day reached its hottest point Joe had been speaking for 15 minutes about Adderstone services on the A19.

Joe:  I stormed out Mick. I’d been quoted £1.99 for a white magnum! This Country! Anyway I was checking my catalytic convertor when … there’s Mikael Oh-win!

Joe: Needless to say we had a chat about this BT Sport malarkey. I asked him who else was working on it with him and he spouted a load of nonsense names. People I’d never even heard of. Owen Hargreaves?! Sounds like a bleeding chimney sweep. May as well say that Captain Birdseye was England’s best captain.. Mind you he’s certainly one of the better captains. I mean I could commentate on more games with my little finger than they could with… a whole hand. I made the bloody BBC! Why didn’t they ask you to do it anyway Mark?

The colour drained from Mark’s face. There couldn’t be more football to talk about, there just couldn’t be. The stock phrases began to swirl in front of his eyes; all he could see was John Motson’s face.

Paul: Why Aye man! Reel her in!

Mark: In more than one way Joe, it’s a big one. Know what I mean?

Mark was relieved that the subject quickly changed. He watched as Joe heaved and pulled at his line, his every sinew stretching. At last he had pulled aboard an averagely sized haddock. Celebrating wildly as if he had won all of his league cups all over again Joe accidentally killed the fish in a fit of excitement.

Paul: Whatta ya doin man!? Dya see that Macky lad? He’s killed something. Which is not nice, really. He must have been on drugs! Errrm, and he’s killed the fish right? And at the end of the day when you kill something, you may get what, twelve days, twelve years, twelve…

Mark:  Paul we’ve come here to go fishing. That was plan A. You’ve got to think of it like the longer you’re fishing the more you get the feeling that neither side wants to lose. It’s the circle of life, and that’s football.

Mark: (whispering) I hate them all, every last one of them.

Paul: Areet lads, I’ve got one fer yee. if ye had to pick between yer girlfriend and Fifa 14 who would ya start the season with like?

Mark: Is that one of those video games the kids are all on about? How imaginative. When can I buy a ticket for your stand up tour, eh?

Joe: I shouldn’t have to pick, I’m Joe Kinnear. They should make me cover star for the privilege of me fronting their barmy X-Blocks Station CD.

[Paul becomes distracted by a glint on the water’s surface in the near-distance and careers off on a blow up pedalo whipped out of his array of plastic bags. A faint aroma of wet poultry wafts across the boat. Joe and Mark appeared nonplussed.]

Joe:  This is what I’ve been waiting for ever since I signed for Newcastle! This’ll show that clot Alynn Sharner. I told him I didn’t say “Kebab”. I said “Keba”; they put the ‘b’ on it. They made a meal of it… Now look at me, I’ve just caught a Europe League trophy! I AM Ossie Ardiles!!

Mark sighed in resignation. His two companions symbolised all that he hated about the game and had hated for years. He felt that this could be a turning point. He could voice his despair, perhaps change things! But what would be the point? He had a life that many would envy. Shouldn’t he be grateful that he was being flown across the world to watch the game he once played? Shouldn’t he be happy?

And yet he could never shake this bitter and cold emptiness at the thought of every morning, waking up to more football. But there was nothing else, a vast expanse of nothing like the sea all around him; football his only life raft, and one that he despised. He could only think of the delivery of his bitter clichés like a hammer blow on the nails of a coffin, slowly sealing the fate of his never ending career in football. Surely one day soon someone would notice his misery and set him free.

Mark: That fish isn’t the biggest of lads, but his height more than makes up for that. I’m sure you know all about the importance of height Joe you always claim to have been at the height of the game.

[Gazza is seen slowly pedalling back to the boat with a smile on his face from ear to ear. He is clutching a six pack ring with two fish caught in it. While he pedals to the boat he suddenly reveals a badly rotten cooked chicken he had been stowing beneath the seat]

Paul: Proper Belta! I’ve been saving this chicken for 3 years like!

Tweet us with your suggestions for upcoming Reality Football treatments.