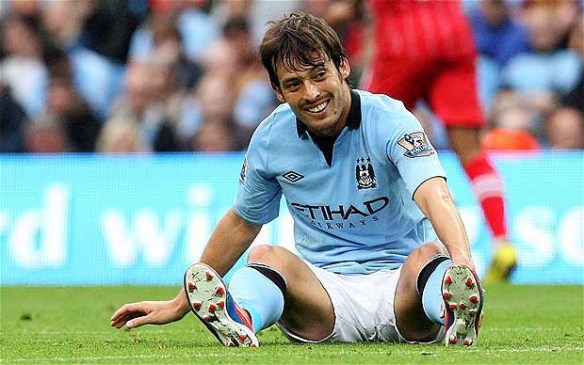 In the autumn of 2011 David Silva was regarded as the best footballer in the Premier League. James Dutton asks why the stall in his career since has gone largely unnoticed…

Cast your minds back to October 2011 and Manchester City’s 6-1 drubbing of Manchester United; a result that looks less era-defining now, 20 months on, but which momentarily confirmed City’s unrivaled ascendance in English football.

The performance was as virtuoso as the result was seismic; central to it all was the dynamism of David Silva. It confirmed his status, in autumn 2011, as the best player in the Premier League.

The Spaniard was instrumental in the first two goals, scored by Mario Balotelli, combining with James Milner to devastating effect, and struck late on himself. He wove a tapestry across the Old Trafford pitch with every swish of his magical left boot, constantly twisting and turning, drifting into space and always with an innate awareness of those around him.

He provided City’s coup de grace for the final goal; an instinctive, 40-yard volleyed through-ball from inside his own half to set Edin Dzeko racing clear. It remains one of the greatest assists in Premier League history.

It was a sumptuous moment which not only sealed City’s dominance but Silva’s stranglehold on the match and crowned City’s finest display under Roberto Mancini; it’s no coincidence that it was the Spaniard who figured most prominently.

There are few world-class footballing artists in the Premier League, and David Silva is one of its finest exponents at his breathtaking best. But days like he experienced at Old Trafford have been few and far between in the 20 months that have since passed.

Before we go any further I feel compelled to convey my long-standing admiration for the Spaniard. There are few players in world football, let alone the Premier League, who are as aesthetically pleasing to watch as Silva. A stalwart Football Manager signing in his pre-City days, he had long been a recurring signing of mine in the seasons before his move to Manchester, and it has been a genuine pleasure to see him flourish on the world stage, and closer to home in the English game.

However, it is difficult to remember anything noteworthy, momentous or outstanding that the former Valencia man has done since that fateful fixture the autumn before last. He has rarely orchestrated a game in the manner of that 6-1 victory at Old Trafford; instead, his influence gradually waned as the Roberto Mancini era ground to a standstill.

It is as if Silva’s reputation has granted him a stay of execution from the critical eye; given his ability and calibre, why was he so often peripheral as City limped to the worst title defence in recent memory?

First, though, some context. 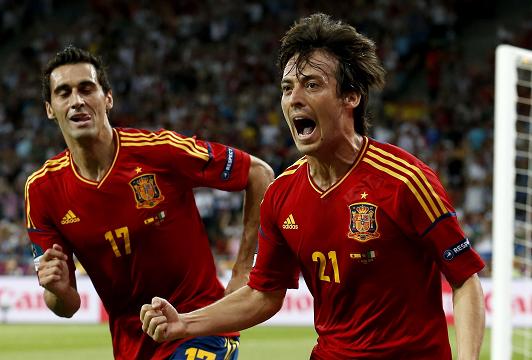 David Silva is the most high profile Spaniard in the Premier League; 74 caps at international level, 20 goals, two European Championship winning medals sandwiched either side of his country’s maiden World Cup triumph. They are impressive figures.

Fernando Torres has more caps and is more widely known, but the 29-year old’s influence and reputation is waning on both the domestic and international scene.

Yet Silva is no longer considered among the best in the Premier League – his absence from deliberations over the flawed PFA Player of the Year nominations were revealing. Is he even the best Spanish footballer in England anymore? During last season his output lagged far behind that of his countrymen Juan Mata and Santi Cazorla.

Despite this domestic regression, Silva has been largely imperious for his country; an ever-present during Euro 2012 – for which he was included in the team of the tournament – and the only Premier League player who started for Spain in their 4-0 demolition of Italy in the final (he also supplied the brutal finishing touch for the glorious opening goal).

As the Confederations Cup dominates attentions in the close-season, Silva has the opportunity to remind us of his undoubted talent; Spain’s style of play enriches the talent that Silva possesses. But to do so, he would have to be on the pitch. He represented the second string Spanish XI who disposed of Tahiti 10-0, and though he scored he looked sloppy overall. However, it’s impossible to gauge a player’s performance in such a mismatch.

It would be an overreaction to read too much into Silva’s displacement from Spain’s starting eleven for the Confederations Cup – the country has such an abundance of riches that rotation is inevitable, whilst history also dictates a fluctuation in his national selection. After being a key performer in Euro 2008 he made a minimal contribution in South Africa in 2010, starting just the opening defeat to Switzerland before a five minute cameo against Germany in the semi final. This year, he has played a part in three of Spain’s six fixtures.

He has, though, largely struggled to emulate the influence he has for his country at club level since his effervescent showings in Poland and Ukraine last summer.

Given his impressive performances during Euro 2012, it is surprising that he endured such a quiet season at Manchester City. The Spaniard scored just four goals and created 12, only four of which came after the turn of the year. Quite a drop in productivity from the previous, title-winning season when he scored six times and provided 17 assists.

But who took the blame for City’s regression?

There’s been little discussion of the Spaniard’s drop in form; in the rush to find a scapegoat for City’s debacle in Nasri, Balotelli and Mancini, Silva has been wholly ignored. But shouldn’t a player so central to the way a team functions, and so influential in their previous success, be somewhat accountable for City’s shambolic 2012-3 season?

Mancini’s gradually befuddled management seeped through to the squad, who spectacularly failed to hit the heights of their title-winning season. It impacted severely on Silva, who became less sure of his role and function in the side. But David Silva is no kid; no fledgling youngster still learning his trade.

The diminutive playmaker turned 27 in January. He is approaching the peak years of his career, and already possesses an enviable honours list at both domestic and international level.

There is another overriding message in Silva’s relative decline, and one that should be heeded more often. The Spaniard has played practically wall-to-wall football since 2007 with just one summer off; 2011, which preceded the most prolific season in his club career. It wouldn’t be amiss to suggest that Silva is physically, emotionally and mentally exhausted. 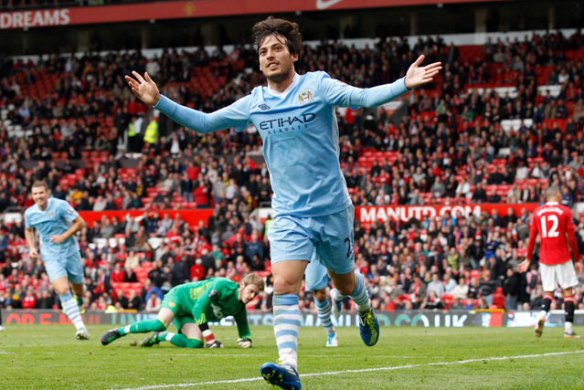 A return to Spain, most likely to Real Madrid, would surely appeal to the attacking midfielder in the near future, but first the opportunity to work under Manuel Pellegrini at Eastlands should prove mouthwatering. The Chilean has a knack for improving the output of his playmakers – from Juan Riquelme at Villarreal to Santi Cazorla and Isco at Malaga.

Next season Silva will also be joined by countryman Jesus Navas, whose position on the wing will add an extra dimension to City’s attacking options next season, but at what cost to Silva? City’s bold pursuit of Isco, who now looks set to join Real Madrid, was ever more understandable when viewed in the prism of Silva’s relative decline.

The best players in world football thrive on proving themselves, especially when competition for places is fierce. Without that competition last season Silva, and particularly Samir Nasri, who took on the role of pantomime villain and media scapegoat, drifted; complacency set in everywhere at the club last year.

A new and rediscovered sense of competition and spice can breathe new life into the tired-looking Silva, and Manchester City’s summer planning should prioritise the revitalisation of their star asset. David Silva should be a treasured commodity in the footballing universe; it is up to himself to recover his zest and Manuel Pellegrini to make him the best player in England again.

One thought on “Manchester City: Why is David Silva Immune from Criticism?”