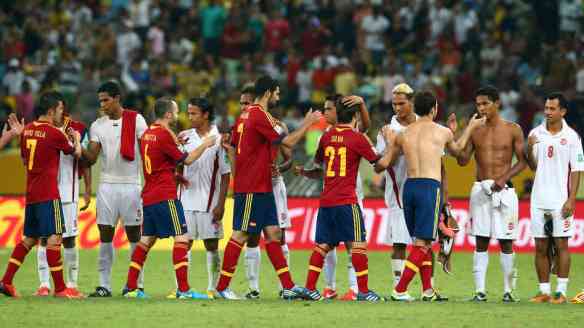 Last night in the Confederations Cup the World Cup winners and European champions Spain, their sparkling contingent laden with universal honours, accolades and a perception of true sporting greatness lining up against a team with one professional player, and of whom nine are technically unemployed; Tahiti.

Was there a real sense of occasion? Yes. A carnival atmosphere? Certainly. Not an expectation but perhaps the hope of an upset? Not even close. Such was the mismatch between the teams ranked 1st and 138th in the world that not even the glimmer of hope of a great world football upset remained, the result was cast in stone, only the numbers left to decide. The odds on Spain to beat Tahiti 18-0 were the same as Tahiti to win.

This was a game characterised by ‘curious’ pundits, interested only in how many goals Spain would score. A vision of how heroic lambs might be led to the slaughter if they would afterwards live to tell the tale. The Tahiti players, despite having by all rights earned their place at the tournament by beating New Caledonia were seen as brave romantics of the grassroots principles of amateurism in the game flying against an unstoppable force.

Tahiti’s management themselves reinforced this view, claiming that “We are proud to represent amateur football”. The Tahitians claimed to be representing the 99% of footballers the world over who are not professional. To be standing up for purist ideals and wonder of the game and for the man in the park who wonders how his Sunday League team would fare against Xavi and Iniesta.

“They try to play properly, they try to enjoy themselves. They don’t try to stop the game or kick players – they enjoy their football and that is the big thing we take from the game today. - Fernando Torres

With kick off the game initially looked as though it would settle into the turgid patter we expect from such mismatches. Tahiti had begun playing like a rugby side seeking territory, with uncontrolled 50 yard clearances proliferating. Within 4 minutes the dream of a glorious upset was totally extinguished when Fernando Torres opened the scoring.

Yet Tahiti played on with such exuberance and a pure naivety that it was a joy to watch. Four players would stream to the ball to block any Spanish midfielder. Roche the keeper was doing his best Beckenbauer sweeper impression to varying degrees of success and at one point asked a defender to tie his shoes for him because he couldn’t do so with his gloves on.

Every member of the team would bolt forward running as fast as they could to run the ball forward at the merest glimpse of a counter attack in a display of cavalier bravado. Cheers for Jonathan Tehau’s solo run on 13 minutes roared around the stadium as if he’d just scored his hatrick. The neutrals had chosen their champion.

Tahiti showed a refreshing change to the eyes of the cynic, a team that had earned their right to play and were going to enjoy it regardless of any threat of a cricket score. Their legs had visibly gone after the 35th minute and Spain began to dominate. In the 68th minute Roche made a fine save; he roused and celebrated with the crowd, throwing his arms in the air as if urging a show of support to break a 0-0 deadlock in extra time. Tahiti were 8-0 down. 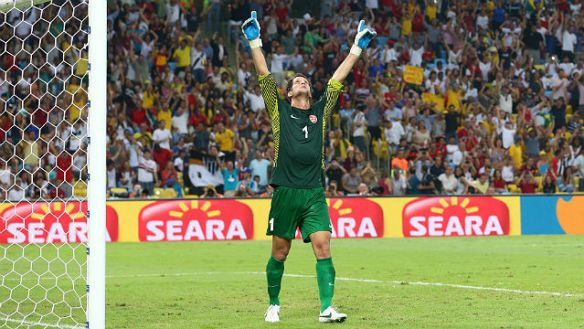 It was this moment that banished any thoughts that perhaps, behind the patronising words surrounding this game, this loss would hurt Tahiti. The thought that no team wants to lose 10-0 regardless of circumstances. Roche perhaps best embodied the spirit of amateurism meeting professionalism. The ideal that this team had earned their right to capture the hearts of the Tahitians, Brazilians and the world, and they were going to enjoy it.

The display at the final whistle, Tahiti celebrating with their adoring crowd will live on for years to come. They may have been intensely naive, defensively inept, exuberant to the point of foolishness but their spirit and cause were noble. Tahiti were like the Cool Runnings of the football world. No one expected them to do well, but damn did we respect them for doing everything right.