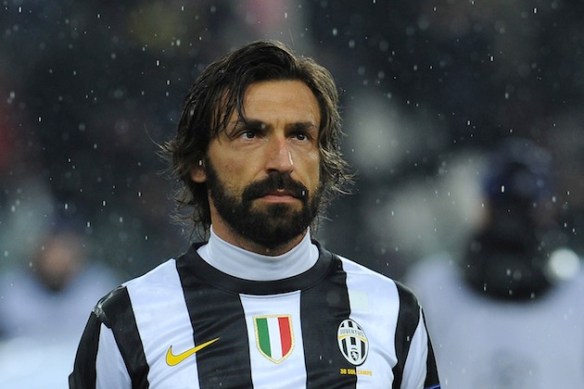 During his first stint in Milan with Inter, Pirlo struggled to cement his place, playing further up the field in a role just behind the front man. Though he struggled at club level in this more advanced role, he won the U-21 European Championship with Italy, finishing the tournament as the top scorer in his role as a #10. Loans to Reggina and a return to Brescia followed before he was signed by cross-city rivals AC Milan in 2001 – the club where he became the player we know today.

Carlo Ancelotti was integral to Andrea Pirlo’s success at Milan, having the nous to spot his vision, passing range and ball retention, developing him into one of the finest regista the footballing world has ever seen. His first senior cap for Italy followed, as did two Champions League titles, two Serie A titles, a World Cup and several other trophies as he formed a formidable midfield partnership with the tenacious Gennaro Gattuso, becoming the metronome and heartbeat of every team he played in.

In 2011, after several successful seasons, Pirlo parted ways with Milan, with many questioning whether he could still cut it amongst the very best after suffering with injuries. He was snapped up by Juventus, and quickly made sure those asking such questions were answered in the most clear terms possible.

Gianluigi Buffon declared him more than the signing of the century, but the sole proof of God’s existence due to his qualities. Lofty praise indeed from Catholic Italy’s goalkeeping icon, but given his performances in Juventus’ unbeaten Serie A title win even the most vehement of non-believers would struggle to hold onto their negative convictions.

Back in the action in the colours of The Old Lady of Turin, he looked fitter and sharper than he’d ever been, and carried on the trends set throughout his career of topping passing statistics around Europe; undoubtedly giving Messrs Galliani and Allegri sleepless nights over their decision not to keep the playmaker at the San Siro.

Pirlo carried this form into the European Championships, providing a couple of assists, a true foglia morta free-kick and, of course, that penalty against England. Psychological warfare from 12 yards.

In the season just ended Pirlo kept up the high standards he’d set himself, scoring five direct free-kicks and providing countless assists as the Bianoconeri won their second Scudetto in as many years.

Like a fine wine from his own vineyard, Pirlo has gotten better with age, receiving a nomination for the Ballon d’Or this year and continuing to leave us in awe of his almost-unparalleled ability to dictate play. Congratulations Andrea Pirlo, on receiving your 100th cap in the venue you dreamt of as a child – and I wish many more in your direction.