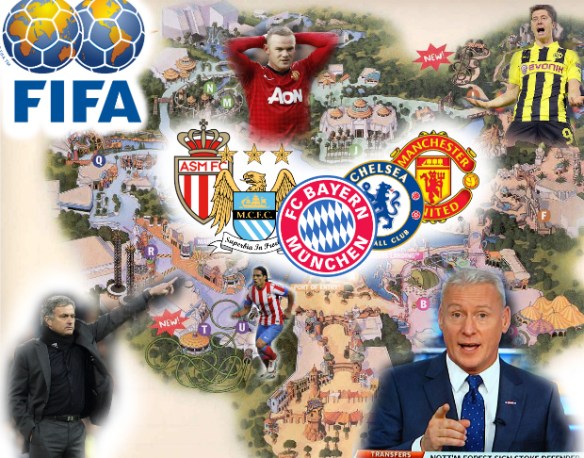 With players and managers switching up clubs across Europe, Greg Johnson argues that in the absence of a fixture list this summer is an attraction in its own right…

Forget your suitcase, sun cream and tickets to paradise. With the major leagues of Europe settled for another season, there’s only one holiday resort for spectators marooned in the summer sun without their weekly football fix.

As the contents of the gossip columns bubble up and spill out into headlines and speculative editorials, it feels almost like the transfer hype-machine has become self-aware with supercharged anticipation. And while it’s easy to dismiss football’s fallow months as “silly season”, this summer’s transfer window is set to be a veritable theme park of landmark signings and thrill ride rumours.

Ignore the cartoon-fronted micro-nations of pleasure built on the swamps of Florida and dig in for June, July and August. With the full roster of the Premier League richer than ever, tensions growing between the established elite and their potential usurpers, and a palpable sense of change sweeping through the dugouts of Europe, for once the off-season looks likely to deliver on the preposterous horse-trading usually reserved for football fantasies and video games.

Welcome to Football Summer Transfer Land, the theme park resort where fan and agent dreams of ridiculous deals come true before your eyes. A Twitter account rather than a plane fare is all that’s required to make the trip: visitors needn’t even leave their homes.

Glance at the park map and pick an area; from the land of the super-club giants to the valley of the mid-table, guests can take in the infamous managerial merry-go-round and whirling striker carousel as they stroll the grounds. Towering over its surrounding, the main attraction is the Sky Sports News Ticker, a ginormous roller coaster that banks, loops, twists and turns with each transfer story. Its girders and supporter beams flash as the latest fluorescent coloured updates scroll across its surface as the voice of Jim White narrates the latest developments coming up on the tracks ahead. From the top of its lift hill, riders can see the full extent of the transfer window, although it’s hard to make out much of the details as the view blazes out of sight with surging dive of speed and new information.

Perhaps the most eye-catching and visible section is the forever-growing plot of cash-rich clubs looking to challenge the traditional European heavyweight. In France, AS Monaco have already splurged over £160m on bringing Moutinho, Rodríguez, Carvalho and Falcao to the French Riveria, with Victor Valdes rumoured to also be on the verge of making the switch from the Iberian peninsula. Lured by the riches of the club’s new oligarch owner Dmitry Rybolovlev and Monaco’s controversial tax-free status, the club’s resurgence looks to be the only major challenge to what had previously looked like an inevitable domestic monopoly for Paris Saint-Germain.

Monaco’s impressive spending has been overshadowed however by their existing ban from competing in Ligue 1. The looming battle to overcome this sanction will surely be another sideshow source of intrigue to keep the public entertained until its inevitable resolution before the start of next season. Monaco’s argument that their squad too glamorous and valuable to the Ligue 1 brand to be denied sounds just about audacious enough to work.

Across the channel, a similar appetite for high-end reinforcements has taken hold at Chelsea and Manchester City, with both clubs ready to gorge themselves on the Premier League’s latest, exorbitant TV deals. Manuel Pellegrini has already brought Jesus Navas and Fernandinho to the Etihad for £16m and £34m respectively to mark the start of the Chilean’s new-look, “holistic” era in a promising fashion. On paper at least both players appear to solve two of City’s most pressing tactical issues; a lack of speed and width on the flanks and composed technique and creativity deep in midfield.

The return of Jose Mourinho to Chelsea is sure to trigger a similar glut of spending at Stamford Bridge with Edinson Cavani touted as the Special One’s first major target as he seeks to reinstate his domineering presence upon the English game. Across London, even Arsene Wenger is said to tempted to finally unleash the long-feared financial might of Arsenal’s lucrative infrastructure building at the Emirates, with a budget said to be around £70m and eyes for Wayne Rooney.

Meanwhile, it’s not just the Premier League’s top clubs who are benefitting from the new broadcasting income. Norwich City secured Ricky Van Wolfswinkel’s from Sporting Lisbon before the end of last season, safe in the knowledge that the handsome financial rewards of escaping relegation would hand them an advantage over most of Europe’s non-Champions League regulars.

The likes of Swansea City and West Bromwich Albion will seek to invest and maintain their relaxed paddle down the lazy river of the Premier League mid-table, though as countless examples over the years have shown, one bad decision can send even the most cautiously steered craft down some very rough rapids. For sides reportedly considering spending big to lift themselves into top-flight’s more respectable positions, the currently decommissioned big drop ride still themed on Harry Redknapp’s QPR casts a large shadow. On the other end of the scale, the so-called super-clubs – armed with the rider capacity and commercial might to destroy the competitive balance of their domestic leagues – are queuing up for a go on “The Consolidator”; an exciting, new attraction that seems to get bigger, faster and longer with every ride. Never mind the post-coaster photo shots of screaming punters, FC Barcelona and FC Bayern Munich have so far walked away from their rides with Neymar for the former and Mario Gotze for the latter with many more purchases thought to be in the works. David Moyes appears to be readying himself for his turn to ride, boarding with a substantial budget as he seeks to usher in the post-Ferguson era at Manchester United in style. Thanks to Serie A’s recent loss of stature, Juventus are struggling to meet the minimum height restriction but their presence in this elite group looks assured with Fernando Llorente and Gonzalo Higuain plugging the obvious gap in quality up front.

Unfortunately, Borussia Dortmund, one of last season’s most exhilarating and popular club sides, look likely to be the biggest losers of this on-going process as Manchester United, Real Madrid and Bayern Munich seek to dismantle their youthful, attacking team, wholesale. Robert Lewandowski, Mats Hummels, Ilkay Gundogan and even Marco Reus have all been subject to rumour and conjecture about where they could be playing their football next year, and it’s unlikely that Jurgen Klopp will be the only person hurt by transfer sagas over the next few months.

Though Liverpool fans may be in denial over his intentions to leave Anfield, the human ghost train that is Luis Suarez has already set out his stall in the Uruguayan press. Potential suitors must first weigh up if they’re prepared for the frights that lie within Suarez’s darkness before they make any bid. Real Madrid may feel suitably adjusted to such a move having had to live through the recent antagonisms of Mourinho’s reign.

Much of the potential for drama comes down to individuals and their actions. The move of one player can lead to wholesale changes across line ups of multiple clubs, such is the domino effect of managerial changes and transferring stars. As players are brought in and out of clubs a vacuum is created that reshuffles the deck, and with the apparent wilful disregard for Financial Fair Play and sudden increase in expendable income for clubs, this summer may well be a watershed transfer window.

As with so many declarations of changing eras and brave new worlds in football, this bumper year of deals may well be the end rather than the beginning of the age of the big spenders. The likes of PSG, Manchester City and Chelsea cannot continue to dismiss FFP until they truly believe they can overcome UEFA’s pet project, which is yet to bare its teeth against rule breakers. While another increase in Premier League money will kick in in 2014, clubs seeking a long-term competitive advantage may be better off spending now and saving later. Alternatively, investments in new facilities and other avenues for increased revenue and influence, such as Manchester City’s new ventures in the MLS with New York City FC and South Africa with Black Aces FC, could be key to overcoming the status quo.

If this is the last opportunity to enjoy the ridiculous rides and absurd hype of a fully loaded summer of major horse-trading it should be enjoyed. Why not sit back and take in the sights of football’s excesses in their full, gratuitous glory? Suspend your disbelief and step through the gates – you never know what transfers are waiting to shake up and transform the footballing landscape for the year ahead.