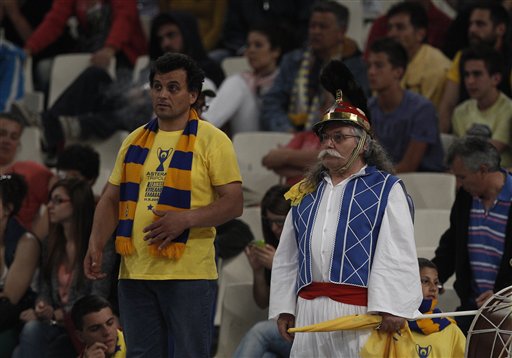 While the usual suspects may have been denied in England’s cup competitions  this year, Simon Smith looks at how hopes of a challenge to the one city monopoly of Greek football faded in yesterday’s cup final between Olympiakos and Asteras…

I’m sure there will be enough speculation about the future of Wigan that I can avoid joining the Martinez brigade here.  It was a brilliant final, a classic giant killing final the likes of which we have been too long deprived of.  Sadly, in the midst of all this, a David killing has slipped under the radar in this weekend’s other cup final.  It’s the sorry tale of Asteras Triploi’s extra time drubbing by champions Olympiakos.

It’s been quite a season for Greek football.  It’s not going to be remembered as a classic: there was no title race, Fan violence continued to spiral out of control, the Hellenic Football Federation proved itself once again to be incapable of any meaningful authority and European campaigns were abysmal.  But it won’t be a season we will forget in a hurry.  This probably will be remembered as the defining season for the Superleague in its recent history.  It’s been one of those seasons you don’t forget because it captured the feeling in the sport so perfectly, so typically, that anybody without knowledge of Greek football could look at the table, watch a few games, and instantly understand what was going on.  I wrote in February about the way the season was heading, but I couldn’t have hoped that the Greek Cup final would epitomise the rest of the year so perfectly.

The underdog story of the year has been plucky upstarts Asteras and their brilliant rise to the tough end of the league.  In a two team league (Athenian giants Olympiakos and Panathinaikos, you know, from the Champions League group stage) where third place is considered the glass ceiling, their early season push to second was always likely to have problems.  Only slipping so far as third is very impressive, if a little indicative of the lack of quality elsewhere.  With regular season over they do have a chance of reaching the Champions League in the play offs, a spectacular feat considering the tiny resources available – the stadium would be below average by League Two standards in England.  More impressive still is the most recent achievement of the side, reaching the cup final against superclub Olympiakos.

Sadly the cup final has been a microcosm of the League season.  Asteras were dogged, the manager tactically astute in nullifying the more expensive talents on offer in the capital, and forcing extra time.  Olympiakos were far from great.  But sadly they were good enough, a 3-1 victory sealing an inevitable double, and crushing the underdogs resolve.  This is the real problem of Greek football: though Asteras have been impressive, they are deceptively far from challenging Olympiakos as a force in the domestic game.  As counter intuitive as it may sound, this newfound meritocracy is worse for Greek football than the Athenian dominance of 5 years ago.  It’s worse for the league because the meritocracy ends at second place. 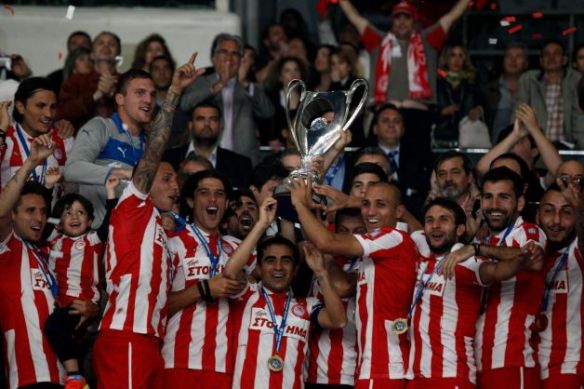 What of the other big clubs then?  Well their absence from the final could not be more typical of their season in general.  PAOK came close, reaching the semi final and second place in the league, but their inability to beat Asteras in that game demonstrates that they are nowhere near being serious contenders either.  The club’s decision to sack Giorgos Donis after the semi final, with next to no time for the caretaker to plan before the play offs, smacks of delusion and a false belief that the club underperformed.

Panathinaikos have been even worse.  Their sixth place position flatters them and demonstrates the weakness of the remainder of the league, given that they were a mere 8 points above relegation and a staggering 37 away from their historic rivals at the top.  They were even 16 points behind Asteras.

The internal turmoil and riots of last year were completely surpassed by the events as AEK, the traditional third club in Greece, who have now had their status as has-beens officially confirmed in a desperate relegation.  For those who did not see the news, this involved a violent pitch invasion in which neo-Nazi affiliated ultras chased their own players, officials and the referee off the pitch, causing injuries in the process.  Points deductions, Nazi salutes from players, pathetically small fines as punishment, AEK Athens’ capitulation really has had it all.

The problems in Greek football go much deeper than this season, but the last 18 months has really brought them to surface.  In light of this it seems unfair to pin the hopes of the league on Asteras, unreasonable that nobody else can share this burden.  Most people expect them to fail in this task.  Manager Óscar Fernández is widely considered the best manager in Greek football as a result of his work there, and along with a host of players is rumoured to be poached by rivals in the summer.  Even if the team can be kept together, Fernández has acknowledged the need to increase the fanbase and commercial aspect of the Tripoli based club for long term success, and in light of the dominance the Olympians hold over the entire country, this is a tremendous task.  A domestic cup would be a good way to begin going about it though.  It’s a shame that one underdog team didn’t go all the way today then.