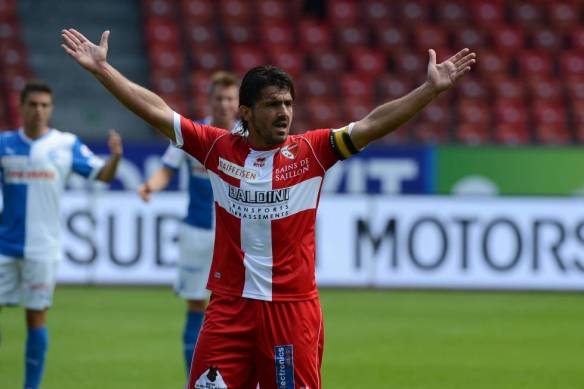 Even the Italian government recognised Gennaro Gattuso’s ample contributions to football when they awarded him the Order of Merit of the Italian Republic–one of the highest decorations an Italian citizen can be given. An industrious defensive midfielder and dextrous (although sometimes overly-zealous) tackler, he served as the anchor for Milan’s midfield for over a decade.

In a career spanning thirteen years for the Italian giants, the inveterate defensive midfielder played alongside the many legends who were part of the revolving carousel of world-class players at Milan throughout the 00s. During his time at the club he helped them to two Serie A titles, a domestic cup and two Champions League trophies. Known for his temerarious tackling and sometimes-belligerent attitude, Rino also has a World Cup under his belt and in the year when Italy became campione del mondo was voted one of the top ten players of the tournament.

With the long-standing Italian tradition of holding on to your veteran players until they’re well into their 30s, it might not have been surprising to see someone of Gattuso’s pedigree still fiercely sliding in on opponents and slapping 6ft 5 taekwondo black belts in the face. Injury and financial difficulty at Milan, however, conspired to put an end to his term there.

Before the 2011-12 season had even begun, he was suffering from vision problems, but despite this pressed ahead and started in Milan’s inaugural match of the campaign against Lazio. During the game he collided with teammate Allesandro Nesta and later admitted that he’d seen Zlatan Ibrahimović in four different places at once (he’s good, but not THAT good).

By late October 2011, Rino had been diagnosed with paralysis of the seventh cranial nerve following the clash with his teammate, leaving him without vision in his left eye. In addition he was also suffering from myasthenia of the eye—a condition which causes muscle weakness. Despite an anxious wait, Gattuso made his long-anticipated return to the squad just seven months later. Such was the extent of the worries he had about never playing again that after his first game back he expressed his jubilation by comparing just being able to train and play as feeling like winning the Champions League again.

Although as the campaign progressed he appeared to be improving, this wasn’t enough to save him from the Rossoneri’s cull of the old guard at the end of the season in an attempt to trim the wage bill and cultivate a sustainable scudetti­­-winning future built around a younger squad. Knowing how agonising it was not being able to satiate his passion for football when he was out injured, the then-34-year old wasn’t quite yet ready to retire.

Initially Gattuso  was linked with a move to Rangers, where he’d spent a season in the mid-90s. Indeed, he is married to a Scot, and on returning to Italy from Scotland he opened up a fish shop—making him evidently one of the few foreigners utterly enamoured with British cuisine. Financial turmoil erased all hope of a move to the Glasgow club, and he instead joined Swiss team FC Sion on a two-year deal. Playing in the Swiss Super League would of course be a step down from playing in Serie A, but after his injury a change of pace seemed exactly what was needed. 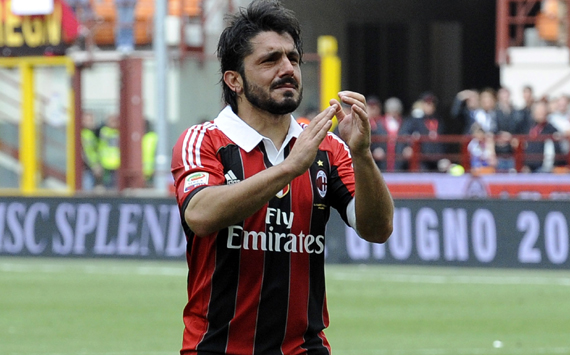 Upon joining he outlined his dream of vanquishing the monopoly on titles that FC Basel had over the league. This was probably a little bit optimistic of him, though. Sion—despite having played in Europe the season before he joined—had finished tenth in the table. This would probably not be too bad of a position in most European leagues, but for the fact that the Swiss Super League is only contested by ten teams each year.

Throughout 2011, the Swiss club had been embroiled in an excruciatingly protracted battle against FIFA and UEFA that went from civil court level all the way up to the European Commission. The club lost the battle, and as a penalty for fielding ineligible players in domestic games they were docked 36 league points. This—rather than on-field and managerial ineptitude— plummeted them to the bottom of the table.

The tenth-place finish earned them an unwelcome spot in the relegation playoffs, which they won emphatically. The win elevated them to ninth position and league survival, and with the previous season’s manager sacked, the legal saga behind them and some new arrivals they were ready for a fresh start. Despite having sacked or demoted five managers by February, Sion are chugging along steadily in the league. The last coach, former Villarreal and Panathinaikos boss Víctor Muñoz, was demoted for bad performances.

After a succession of managers had failed to get the club to perform to the standards expected by the board and fans, they took the somewhat curious step of letting ‘the players […] manage their activities themselves’—as a club statement read. This meant that captain and the most senior player, Gattuso, took over as player-manager. He was appointed in late February, and since then Sion have played nine league games. Unfortunately for the managerial prospects of Rino, only one of those has been a win. Of course, he can’t really be blamed, given structural problems at the club which are out of his control.

It’s an interesting novelty, though. Seeing a legend in control of a utilitarian players-get-more-say-than usual team is very, very satisfying. The best we can hope for out of all of this is that he his spirited attitude is sufficient to bring about a miracle that sees all of Sion’s problems overcome. The worst is that he tanks completely, but is able to blame mitigating circumstances far removed from his control and, crucially, pick up a taste for management, encouraging him to get his license and look for some serious managerial roles.

A little while back, Gennaro Gattuso returned to Milan with Sion to play a friendly. Sion were hammered 6-0 at the San Siro, but it was a welcome return home for Rino. True to form he warmly greeted former teammates Antonio Nocerino and Philippe Mexes with a kick up the bum and a slap on the face respectively.