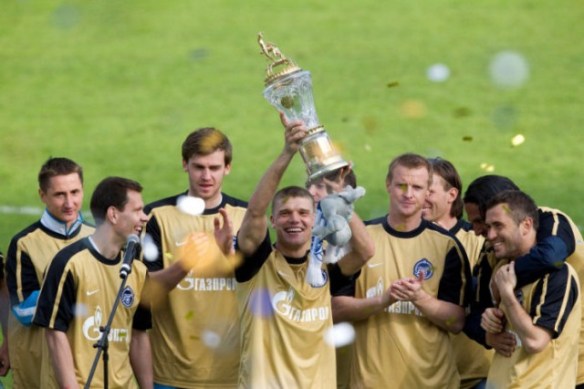 In the first Russian Premier League season to be contested on a fall-spring schedule, five different teams have topped the table, Zenit, Spartak, Terek, CSKA and Anzhi. Yet it is CSKA that have been the undisputed favorites since passing Anzhi on October 28 for 1st place in the league, a spot they’ve yet to relinquish. The Army Men’s balance is easily noted by league bests in goals scored (44) and goals conceded (19).  Eight points up on Zenit with seven matches to play, CSKA’s 4th title in 11 years, and 1st since 2006, appeared wrapped up, but recent draws with rival Moscow clubs Spartak and Dinamo have allowed Zenit to close the gap to four points. With the late-season schedule favoring the challengers, CSKA fans are due for heartbreak.

Zenit face Kuban, Rostov and Amkar away and Alania and Volga at home, one of the easiest remaining slates in the league. CSKA, meanwhile, play at Rubin, Lokomotiv and Rostov, together with home games against Terek and Kuban. With the exception of Rostov, every team on CSKA’s schedule is still in contention for European competition next season. Zenit, conversely, on paper has only difficult match-up remaining – a trip to Krasnodar to play Kuban on Sunday.

The Premier League crown will be sweet validation for Zenit’s embattled manager, Luciano Spalletti, and the roster of foreign and domestic stars. Despite disappointing in Champions League group play and bouncing out to Basel in the Europa League round of 16, Zenit will be re-energized for another run at European glory in 2013/14.

Years from now, we may look back on Zenit’s string of four titles in six years as the end of an era in Russian football. The balance of power in the league is broadening its base, with Anzhi the most recent example, but other clubs such as Dinamo, Krasnodar, Kuban, and Terek also determined to build legacies of their own in the 21st century. Together with Zenit, CSKA, Rubin, Spartak and Lokomotiv, the odds that one club will dominate for years on end are growing slimmer. Improved infrastructure in advance of the 2018 World Cup and the potential United Championship with Ukraine, with its generous revenue-sharing system, could balance the playing field even further for the top 10 clubs in the league (though major problems remain for bottom-of-the-table clubs and Russia’s lower divisions).

As I peer into my crystal ball, what else can be expected from the final five weeks of the season? Eight clubs, after all, are fighting for up to four Europa League places, while six clubs at the bottom are at risk of relegation. 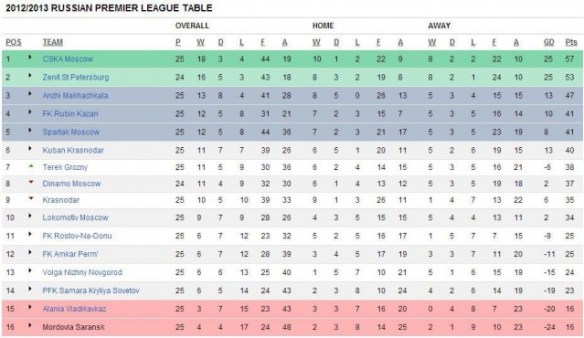 Zenit have appealed their 3-0 technical defeat to Dinamo back on November 17, which is why the two clubs appear to have a game in hand. Zenit’s appeal will almost certainly be denied.

At the top of the Europa League scrum, Anzhi appear secure, six points clear of 4th-placed Spartak and Rubin. Despite a difficult schedule, including a Russian Cup semifinal on May 8 against Zenit at Petrovsky, they will remain third, thanks in part to an away draw against Spartak and home win over Rubin.

It gets more complicated further down, where four teams, Spartak, Rubin, Dinamo and Kuban, are currently separated by one point, while Terek lurk another two points back. Though just 3rd-5th guarantees a place in the Europa League, if CSKA defeat Rostov in the Russian Cup semifinals, the 6th-placed club will also receive a berth next season.

In any case, it’s Dinamo that will close the season best, avoiding defeat in the final 16 matches of the season, and securing 4th. Spartak will come in 5th, one point back of their historic rivals. In the potentially crucial battle for sixth place, Terek will squeeze by Rubin and Kuban, thanks to a 2-0 victory over Krylia Sovetov on the final day of the season coupled with Rubin’s draw at home to Krasnodar and Kuban’s loss at home to Anzhi.

Rounding out the top 10 will be Kuban, Lokomotiv and Krasnodar, in that order.

At the bottom of the table, few surprises should be expected. The bottom two clubs are automatically relegated in the RPL, while the 13th and 14th-placed clubs advance to a four team playoff with the 3rd and 4th-placed clubs in Russia’s Football National League. This season, Alania and Mordovia are doomed, after losing relegation matches to Krylia Sovetov and Volga, respectively, last weekend. Amkar and Krylia Sovetov, meanwhile, will guarantee a place in the league next season, while Rostov and Volga will await the playoffs.

Here’s a free peak at the future in Russian football:

*For those curious, here’s how I expect the end of the season to unfold in detail (predictions made before start of today’s Volga – Krylia Sovetov match, though you just have to take my word for it):

One final note – I expect CSKA to beat Rostov in the Russian Cup semifinals to advance to the June 1st final in Grozny, where they will meet Anzhi. Anzhi, however, will win the Cup for the club’s first-ever title.