While Channel 4 has never been known for its football coverage, the morning roadshow Football Italia was something of a pièce de résistance. For one, it introduced the erudite and hilarious James Richardson to our screens but also gave an insightful window into a very different footballing culture. What started as a series to keep tabs on Gazza’s fortunes at Lazio (and not to mention David Platt and Des Walker’s continental forays) became a hit for a small but dedicated cult following. For this merry few, the weekly shot of Richardson going through the Italian papers whilst sitting outside in a café became near iconic.

In 2001-2, the final season in which Football Italia was broadcast on Channel 4, two players were tied for the honour of top goalscorer with a tally of 24. One was Juventus striker David Trezuguet. The other was Dario Hübner. Although he never played for the Azzurri, Hübner enjoyed a long and prolific career. Alongside Igor Protti, he is the only player to have been top scorer in Serie A, Serie B and Serie C. Hübner was a pure goalscorer and a late bloomer; to draw a loose parallel, he is perhaps the Rickie Lambert of Italy.

‘The Bison’, as he was nicknamed for his bulky build and powerful style, spent most of his early career in the lower echelons of Italian football before joining Serie B side Cesena at the age of 25. Hübner spent five seasons at the Romagnan club, reaching double figures in every year and winning the top scorer in the 1995-1996 season. In 1997, at the age of 30, he finally made his debut in Serie A with Brescia. Although Brescia struggled and were relegated that season, these were fruitful years for Hübner. He continued to reach double figures every season, including 21 in the 1999-2000 season when Brescia were promoted. 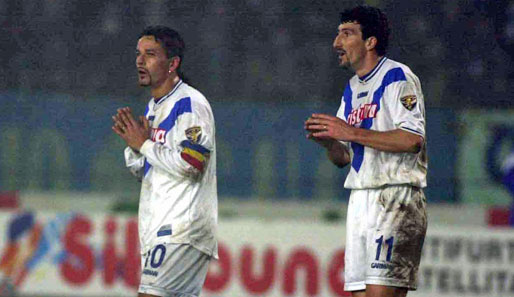 In sync: Roberto Baggio and Dario Hübner at Brescia

With Brescia back in the top flight, Hübner formed a deadly partnership with a more well-known Italian legend – Roberto Baggio. At 33, ‘The Divine Ponytail’ was the same age as Hübner but that season, he and ‘the Bison’ discovered a new lease of life, scoring 27 goals between them. Their efforts lead to a 7th place finish, which meant Brescia qualified for the Intertoto Cup of which they reached the final that summer. That season, Hübner also had the pleasure of playing with a future Italian great. Andrea Pirlo joined Brescia on loan from AC Milan and his potential was obvious. Speaking just before his retirement in 2010, Hübner describes Pirlo as “just pure class. I would say that Andrea Pirlo is the strongest of my former teammates”.

At 34, Hübner found himself surplus to requirements at Brescia and felt his position under threat from the Albanian striker Igli Tare. He moved on again to newly-promoted Piacenza for around £1.5 million. This was the 2001-2 season and Football Italia duly brought us coverage of Hübner’s finest year. That season, Hübner was rampant and outscored the likes of Hernan Crespo and Andriy Shevchenko as well as fellow Italians Christian Vieri and Alessandro Del Piero. As a penalty box striker, he was all about power and aerial ability. One suspects he might have done well in England. His 24 goals guided Piacenza to a comfortable 12th place finish.

So what happened next? Well, Football Italia was dropped by Channel 4 and moved to Eurosport. Richardson stayed with the show until 2006 and his entertaining, irreverent style would earn him the role of anchor on The Guardian’s Football Weekly podcast. Meanwhile, Hübner was proving that he had something left in the tank too. Leaving Piacenza as their record goal scorer in the top flight, he worked his way down the divisions and a highlight came in 2004-5 when he scored 7 goals for Mantova to aid their promotion to Serie B. He continued to play for various clubs for the next six seasons before finally hanging up his boots in 2011, at the age of 43.

Over the course of his career he had had trials with both Milan and Inter but they did not lead to anything. When asked why he never moved to a big club, Hübner was typically humble. “I’m not complaining: as a young man I was a blacksmith and worked with aluminum, who would have guessed I could get to do a career like that? I’m very happy with that.” A journeyman who never stuck around at one club for too long, Hübner deserves to be remembered as one of the great domestic Italian strikers who kept on playing for his love of the game.

2 thoughts on “Obscure Footballer of the Week #6: Dario Hübner”