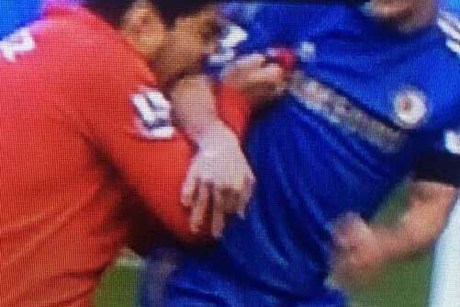 While undoubtedly bizarre, such a response seems wholly disproportionate for a bite considering the sort of behavior from Suarez that has previously been accommodated. As yet more top ten lists and features detailing his depravity flood the social media channels, it’s worth questioning where this level of analysis with mitigating apology was following his indictment for racially abusing Patrice Evra?

Even staying in the realms of the physical, his vicious eye gouge against Scott Parker last season was a far more serious offense and yet hardly left a ripple in the public conscious. Unless Suarez is a carrier of rabies, attempting to blind someone with your fingernails is an act that potentially carries far more severe consequences than a bite.

Priorities, as always, appear to be well and truly out of line with the severity of the issues at hand. The knee-jerk springing into action and judgement that followed Suarez’s nibble of Ivanovic wasn’t dissimilar to the white hot, grass roots rage that greeted the MP’s expenses scandal. As that particular drama rolled into overdrive thanks to prolonged public angst over money, body counts continued to grow in the Middle East as a result of wars that enjoyed neither the emotional investment or focus afforded a fraud scandal. Money is more valuable than lives, and biting is more repugnant than racism.

The idea of blacklisting Suarez from the Premier League and sacking him as punishment is also utterly perverse. In what way is an ascent into the Champions League on increased wages and a juicy signing on fee a punishment, for Suarez would surely be a target for the great and the good of European football should Liverpool decide to offload him.

Rather than offer him an escape route to riches and glory, why not allow him to wallow and stagnate at Anfield winning only minor honours at best as his reputation sinks to new lows with each passing season and controversy.

You can already hear the sound of apologists sharpening their knives as they sift through YouTube for footage of Keane on Haaland and elbow strikes from across the leagues and eras, yet Suarez is different. His offenses are as systematic as his apologies are formulaic. There are no witch hunts or grand conspiracies, or even isolated incidents – this is the amoral, hyper-competitive nature of Luis Suarez: football’s Patrick Bateman.

From the feigns of victimized injury following each and every foul and trick he attempts, to his false innocence and modesty as he woos online Kopites through their Twitter feeds, as Liverpool’s star player and misjudged anti-establishment hero, he is a maestro of stringing along the club’s most blinded, biased minority in the most cynical and self-serving ways possible. Announcing that he wishes the fine imposed on him by Liverpool should go to the Hillsborough Justice Campaign is possibly the only element of his latest outburst that sticks in the craw with equal disgust as his previous high-end catastrophes.

So save the blood curdling fury and forget the bite. If you wanted to damn Luis Suarez you missed your chance in December 2011. Late comers citing his current misdemeanor as the “inexcusable” act in this epic saga of offenses should instead find themselves a mirror and judge their own values.

7 thoughts on “Luis Suarez bit Branislav Ivanovic, and what?”