Tottenham Hotspur, Chelsea and Newcastle are all good teams, but none of them are great teams.  There have in the last few seasons been two different classes of English club in Europe’s junior cup and for different reasons neither have had the ability to make significant progress in the tournament: clubs with desire but who lack the quality, and clubs with the quality who lack interest.  First there are the likes of Manchester United and Manchester City last season, teams who surely had the quality to win but who had much higher aspirations.  It might be a little arrogant but in a championship they had no intention of even qualifying for, it’s understandably difficult to motivate players.  Because of the tradition of teams falling from Champion’s League group stage into the Europa League and failing, Chelsea’s run to the quarter finals is something of an anomaly.

In recent seasons we have seen on a regular basis the likes of Stoke, Bolton, Birmingham and Portsmouth qualify for the Europa League or Uefa Cup with genuine excitement and anticipation but without expectation.  Even if those clubs would like to take the cup seriously, the small squads and pressures of relegation battles (or threat of potential ones of they over-rotate) mean that it just isn’t much of a reality.  The decision by Tony Pulis to make nine changes to his starting eleven for the away trip to Valencia a year ago epitomises the mentality that the magic of Europe must be outweighed by the pragmatism of the League. 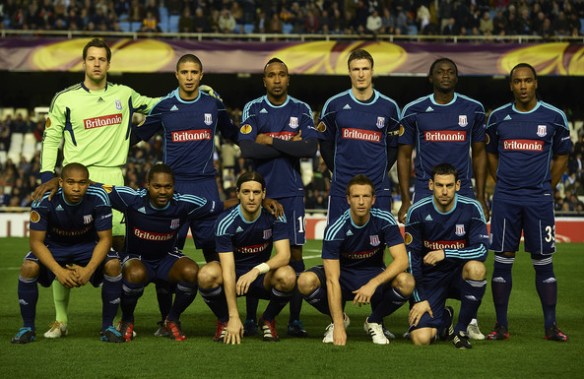 Stoke City at the Mestalla

Then there are the Evertons, Fulhams and Aston Villas, larger clubs who have exciting squads capable of competing with most the clubs in the Europa League but perhaps not quite good enough to go the distance.  These are the sides regularly finishing in the top half, bearing in mind that I am of course referring to these sides circa 2009 and neither now or the early 2000s, when Everton were better and the other two were worse.  In fact 2009 was a year in which all three qualified for the Europa League finishing 5th, 6th and 7th, so that’s a year I’d like to have a little snoop at…

What’s so special about that year?  Well not a lot really.  It was the following season that the Cottagers embarked on their remarkable run that incorporated the amazing comeback from being 4-1 behind on aggregate against Juventus.  It was these three sides that year that maybe best encapsulate the type of teams that used to qualify from the Premier League to the Europa League, the sides that finish just below the top four, and it’s this typicality of 2009 that makes it such a great comparison to the current crop.  When our current quarter finalists qualified for the Europa League, it’s easy to forget that it was in similar circumstances: finishing just below the Champions League places.  Yes Chelsea dropped into it from the Champion’s League group stage, but their 2012 league position was equivalent to Everton in 2009.

But this belies a huge difference in these two seasons, and this is what perhaps best explains the turn in fortunes of English Europa League clubs.  In 2009 the three qualifiers finished just below the top four, but none were realistically anywhere near challenging for a Champion’s League place, while last season Newcastle, Chelsea and Tottenham were all very heavily involved in the battle for third place going down to the last day.  It’s easy to forget that European Champions Chelsea finished fifth, barely ahead of Newcastle.  Who five years ago would have imagined that the European Champions could finish fifth in the Premier League?  What would have seemed a more likely way of this even happening back then, Aston Villa winning the European Cup of Manchester United finishing fifth?

All three of the English quarter finalists are certainly capable teams and therefore it’s interesting that they came from the same part of the league as previous English teams that have struggled. Fulham is something of an exception in being beaten finalists, but it has to be remembered that the run of 2010 was a huge surprise.  It all points to the change in the makeup of the Premier League since 2009, besides Manchester City finishing 10th then and champions now, and that is the change in the spread of teams.  Back then there was a strong top four, the so called “big four” which had an air of invincibility before Liverpool’s demise.  A huge gap between this and fifth place in both quality and points created a hugely competitive mid-table pack stretching down to 14th and perhaps six or so poor teams fighting relegation.

The league of today is very different, with congestion where there used to be chasm.  There is now something of a gulf between the top two, or perhaps one this season, and the battle for fourth place.  Meanwhile the places from third to sixth have become a hotbed of congestion, with a slightly less packed mid-table and the entire bottom half uncomfortably close to the relegation zone.  The result? A fifth place team from last season might be a much better team than the equivalent from several years ago because it’s a competitive area of the table, while a third place team might be significantly worse now because there are less good teams above them to push them down.

How does this effect next week’s fixtures?  Well there’s two ways.  A worse team can qualify for the Champion’s League than in past seasons, and none have made it to the quarter finals.  On the flipside a better quality of side is getting into the Europa League, and there are three quarter finalists to prove it.  Spain is a league which in recent seasons has had this same composition of league, and their success in the Uefa Cup and Europa League might have something to do with this.  It has a reputation for being a two team league, but from third place onwards there is a highly competitive area of the table with Villareal, Bilbao, Atlético Madrid, Málaga, Valencia, Sevilla and Deportivo regularly challenging between third and eighth place.

All leagues have a different composition and all are constantly changing, but for domination of the Champion’s League having a set top three or four of disproportionately high quality is ideal, though this would be detrimental for the Europa League which requires more competiton between third and sixth: hence Atlético’s persistent success in recent seasons and hence the Premier League trio this season coinciding with a tight race for third.

Of course this isn’t an exact science at all.  Serie A has Juventus running away with it and a close race for second place between Napoli, the Milan clubs, Fiorentina, Lazio and Roma, and yet only Lazio remain in the competition.  As well as this the lack of a league in which each team from first to twentieth is slightly worse than the one above, an exactly even spread, makes it hard to compare the spreads of different leagues.  But the trend is undeniable and if it continues next season people will have to take note.  The “demise of the Premier League” media narrative has been grossly misunderstood because the top four clubs each season cannot be considered to indicate the strength of the entire league, as the same journalists are constantly saying about La Liga.  In reality the league is probably no stronger or weaker, but the specific set of circumstances that made England such a force in the Champion’s League have ended and now context plays into the Europa League’s hand.

The English have always been sceptical about Thursday Football, but this season all three sides have reason to really commit themselves to their matches.  Having all avoided each other, the draw has been as kind as they could have hoped for and neither Rubin Kazan, Basel or Benfica are unbeatable.  All could do with European success more than usual: Newcastle need a remedy for a derisory campaign if they are to prove last season was not a blip, Spurs need a trophy to declare their arrival at the top table, and even the blues can’t afford to sniff at the Europa League in light of poor league form and a growing dissatisfaction from the fans.  And for a change, not only are the three teams who have the desire to take the competition seriously in the quarter finals, unlike Fulham, Villa and Everton in 2009 they have the class to make it happen.

In short, the three English quarter finalists might be the West Broms of Europe: too good for one league, and too poor for the other.  With Arsenal breathing down their necks (or in an all too familiar to Baggies fans relegation scrap in Newcastle’s case) none of the three can afford to ignore crucial league games coming up, but the London Clubs in particular need to ask themselves which would be better, glory in the second tier or progression to the top table and elimination at next year’s Champion’s League group stage.  If any of the three are too good for this cup, all three need to prove it first on Thursday night.