If you’re an avid supporter of my work you’ll remember that last week I wrote a piece on the Neutrality Index, a combination of the factors which I believe a team’s neutral support is based on. Further to that article I now plan to take those factors and examine the case for two of the neutral heavyweights of the Premier League. In doing this I hope to try and figure out who has the best case to be ‘the people’s choice’.

All season ticket prices quoted are for the cheapest season ticket. I’m also choosing to include some famous fans of each club, both as perhaps an indicator of the kind of person who follows that team and also because it’s a nice interesting little factoid of the kind that pub quiz enthusiasts like myself thrive on in their pointless hours. Enjoy. 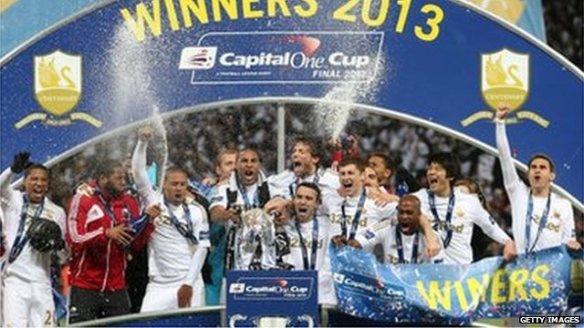 Famous Fans: Catherine Zeta Jones is the closest I can find, and even that is contentious. The lack of famous fans is perhaps evident of the relatively brief time that Swansea have enjoyed at the top table

Level of Success: Swansea’s recent trophy haul was limited to FA trophies in 1994 and 2006 before this year’s elegant gallop to the League cup trophy. The team is capable of beating teams such as Arsenal and Chelsea and yet losing away at Aston Villa in the same season. They are not an imperious winning machine but play attractive football capable of beating any side on their day.

History: Swansea are relative newcomers to the Premier League, prior to 2011 having last been in the top division in 1981. Their successes and grand history on the pitch at the top level are therefore rather limited.

As such Swansea are far from begrudged any victories they come across. In fact they are often widely celebrated. Their lack of rivalry outside of Cardiff means that the only reason I have encountered for the majority of people disliking Swansea’s success is a bizarre dislike for their status as a Welsh side.

Youth Policy: Swansea’s youth policy itself is nothing particularly special. Their status as a lower league side meant they couldn’t attract great players to the academy or keep them if they did.

What Swansea have done exceptionally well is remain faithful to players such as Garry Monk, Nathan Dyer, Leon Britton (despite selling him in 2010) and Ashley Williams who have been with the side for years in the lower leagues. Swansea play youngsters and stay faithful to them.

National Focus: For a Welsh team this is a particular criticism. Swansea only have two Welsh players in the first team squad, Williams and Taylor. Neither do they particularly provide for the England side. Given their newcomer status this can be forgiven but it is an area that will need addressing in future if Swansea are to continue their development.

Style of Play: A huge bonus for Swansea in this area is their attractive possession based passing game. Swansea frequently record pass completion rates of 85% or higher, press from the front, and seem to exhibit an almost striker-less 4-6-0 formation at times. This is why there are, admittedly hyperbolic, comparisons with Barcelona at times. You know you’re doing something right..

Manager: Michael Laudrup is a big name, a fine tactician, shrew businessman and dapper gent. An exciting young manager already touted for the Real Madrid job he is perhaps better suited to managing at the level he is at for a longer spell, as signings such as Chico and Jonathan De Guzman seem to suggest.

Laudrup is good at knowing a certain level of player that he can rely on. This would not be as evident at the very highest level (See Roy Hodgson’s Liverpool experiment). Nevertheless he is an exciting prospect for the future and a very likeable man.

Club Owners: It says a lot that few people are even aware of Huw Jenkins’ existence such is his uncontroversial nature. Nevertheless he and the directors have been instrumental in implementing a philosophy into the club that has encompassed the seamless transition of Roberto Martinez, Brendan Rogers and Michael Laudrup into a football philosophy of neat attractive possession passing.

Consider also the chairman and director’s great willingness to work with The Swansea City Supporters Society Ltd, who own 20% of the club, and there are few better owners in the league.

Season ticket: £429 – Number 11/19 in the cheap index. Not brilliant but not extortionate, probably about the right level for a team attempting to establish itself in the big leagues for the first time. Again note that the club is 20% fan owned before admonishing ticket prices.

Underdog Status:  Few can match the story of  a four league tier climb in 8 years, even fewer with a major trophy to boast of in that time frame. Swansea are perhaps quintessential of the underdog come good story, sweating blood, sweat and tears to endear themselves to all and sundry.

If they hadn’t come up against another even more outrageous underdog in Bradford City in the league cup final the coverage surrounding the cup tie could have been extremely different.

Maverick Players: Michu is perhaps the only player I would attribute to this character. Dyer, Britton and Routledge are very functional and provide precise roles, in the form of willing channel workers and a possession metronome. There is no Cantona or Riquelme in Swansea white at the moment.

Level of Success: Everton occupy a special place as king of the also-rans. They regularly finish in the top 6, reached the FA cup final of 2009, and qualified for the Champions League in 2004. Yet they haven’t won a trophy since 1995.

At the same time, under their current management they regularly challenge as a ‘top team’ and yet have never won away at any of the big 4 (I’m including Liverpool in this big 4 as for a large swathe of Moyes’ management this was the case. This stat is also barring a win at the Etihad which came before City had actually finished in the top 4.) This unpredictable nature works in favour of the Neutrality Index at the same time as a perceivable stagnation works against it.

History: Few clubs have as rich a history. From Dixie Deane to the all conquering 80’s team cruelly denied their chance at European glory by the Heysel disaster, Everton are one of the mainstays of the English top division.

The term ‘the people’s club’ was coined by Moyes himself and derives from Everton’s hard battling nature, their loyal fans, and admirable history. Few clubs are so admired, outside of the red half of Liverpool of course. (as the spectre of my editor leers over my shoulder).

Youth Policy:  One of the best. Rooney, Rodwell, Anichebe and  Osman  are all products of the Everton Academy(also Francis Jeffers and Richard Dunne but we’ll forget about them for now). Everton not only promotes from within but regularly gives youth a chance to prove itself. Leon Osman is a devoted and reliable one club man and there are far too few of his like in English football.

National Focus: Wayne Rooney is probably the key export from the academy but Everton also nurtured Lescott, Jagielka and Baines to provide a potential ¾ of England’s back line. It’s unfortunate that Baines has one of the best left backs of all time in front of him or he would unquestionably be an England regular.

Style of Play: Highly admirable. Perhaps the finest use of the overlapping fullback in the league in Baines, combined with a stylish and steely midfield, best personified by that oft maligned silken bruiser Marouane Fellaini and a lethal finisher in Jelavic. Everton are ruthlessly efficient if not particularly irresistible but not unpleasant to watch by any means.

Manager: David Moyes is the third longest serving boss in the Premier League and without question one of the most respected managers in the game. His only question mark is whether he has he failed to live up to his potential by not delivering silverware. Perhaps if Everton had won just one trophy they would be cemented as the self styled ‘people’s club’.

Club Owners: Bill Kenwright is a lifelong fan, only interested in the good of the club and refuses to bankrupt the side by bankrolling unfeasible transfers. A fine and respectable chairman if, at times, a frustratingly prudent one.

Underdog Status:  Underdog to no one except the top 4, Everton now occupy the void underneath the Champions League spots. The will they-won’t they this year saga never quite reaches the frenetic pace that it does over at White Hart Lane but Everton can hardly claim an underdog status in many matches these days.

Maverick Players: Arguably Everton are a very functional team. The closest player to this category would be Pienaar with perhaps Fellaini showing glimpses. There is again no Cantona or Riquelme (Although I did really used to enjoy when a commentator would attempt to say Bilyaletdinov in a hurry). Baines personifies the team as its humble chief and reliable stalwart.

Taking account of wins in each category it would appear that Everton have the upper hand, primarily because of their longevity. It is the amount of time spent at the top table that has allowed them to keep their best players at youth club level. A resourceful manager has built on the initial success of a once great team and created a legacy which has never quite blossomed into enough success to garner hatred.

This relative success has in turn allowed for a production line to the national team many teams would envy. His style may lack the fluidity of Laudrup’s side but Moyes embodies so many of the combative qualities of the underdog that you would be forgiven for mistaking Everton being the recently promoted side, albeit they would be a wildly successful one.

Everton are the ‘people’s club’ in this debate and yet their status hangs on a precipice. Should they continue to fail to challenge for the top 4 or win a trophy quite soon it is quite possible that malaise and decline will set in. Players like Fellaini will leave and an ambitious manager may eventually follow.

While Moyes’ popularity amongst the Everton faithful is cemented there are some that claim that this is a sink or swim moment for the Scot. Either he proves his worth as one of the top managers in the country, achieves a glorious Zenith at the top potential of the NI by rallying the people of the nation behind an unexpected assault on the top 4 or a trophy or he falls into the mire of repetition. Neutrality hates a bore.