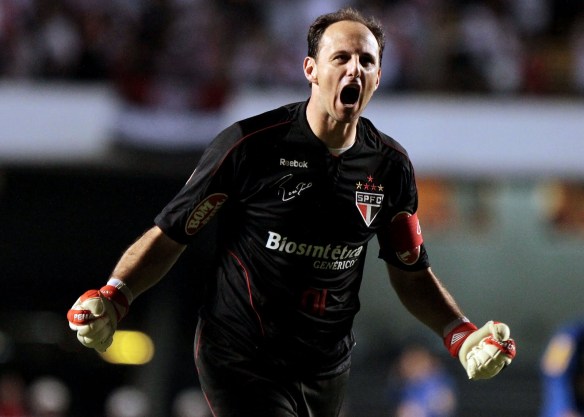 As far as the records stretch back, there are almost fifty goalkeepers in top divisions around the world who have scored five or more goals in domestic and international tournaments. Goalscoring goalkeepers are something of a novelty in the top divisions in Europe, but they have abounded throughout the ’80s, ’90s and into this century in South America.

That’s not to say we’ve been without them in Europe. Recently-retired German stopper Hans-Jörg Butt—who played for Hamburg, Bayer Leverkusen and eventually Bayern Munich—holds the record for the highest number of penalty goals scored in a professional league in Europe. Mostly, though, fans of European football will have be content with the likes of Manuel Neuer and Víctor Valdés, goalkeepers whose passing and vision allow them to act almost as sweepers, getting involved in building up play from the back.

Former Brazilian international keeper Rogério Ceni, though, needs to be at the peak of any list of goalscoring keepers. At the age of 40, Ceni is still scoring for his club São Paulo and is one of the world’s most consummate dead ball specialists. A couple of weeks ago, he put his 109th away against Guarani with one of his trademark freekicks. As a youth Ceni didn’t have much stock in the world of football, and had to split his time between working in a bank and playing. He joined São Paulo in 1990 as their fourth choice keeper and has stayed there ever since. A true one club man, Ceni has made over 1000 appearances from them over the past 22 years.

A minor blip came in his career when the São Paulo hierarchy suspected him of trying to coerce a pay rise by forging a document that insinuated Arsenal were making overtures to sign him. All of this was behind him by 2005 though, by which time he had become São Paulo’s captain. That year, they won the Copa Libertadores and Club World Cup and Ceni was voted best player in both tournaments. 2005 saw him score 21 goals in 76 matches in all competitions, a record that surely is the envy of many strikers. His overall record is 109 goals in 1056 games, an average of nine or so goals a year. Unfortunately for Ceni, his playing career is grinding to a halt due to injuries and the inevitable fitness drop that comes from being a 40-year-old who has played consistent football for over two decades. But as he proved a couple of weeks ago with the goal against Guarani, the former Ballon d’Or nominee has still got that magic touch. 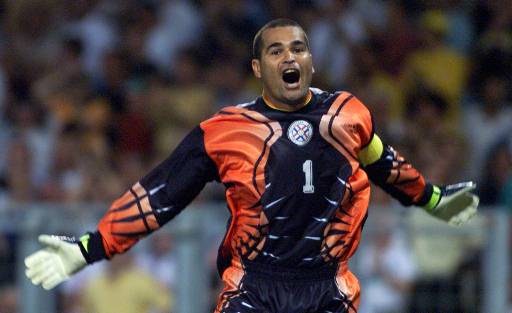 Next up is Paraguay’s José Luis Chilavert, perhaps familiar to those who followed international football in the mid-90s for fighting with Colombian then-Newcastle striker Faustino Asprilla in an international match. If you followed European football in the early 90s, you’ll recall him as Real Zaragoza’s keeper, but thanks to a the European suspicion of trusting your goalkeeper with goal-scoring duties he was never first choice for penalties and freekicks. It was when he returned in 1991 to Argentina to play for Vélez Sársfield that he carved out a reputation as a dead ball aficionado. He held the record for the world’s highest scoring keeper until Ceni overtook him, and was named South American Footballer of the Year in 1996. With numerous domestic titles and a Copa Libertadores under his belt, Chilavert managed 62 goals in almost 550 appearances in Argentina, Spain, France and Uruguay—two of them, amazingly, from open play. He has the unique honour of being the only keeper on this list, and indeed in history, of scoring a hat trick.

We can’t give all the credit to the South Americans. Bulgarian Dimitar Ivankov, who retired a couple of years ago, spent eleven years as Bulgaria’s first choice keeper, but ultimately remains a more elusive figure in the world of goal-scoring goalies. Another deadball target man, he managed to get onto the score sheet 41 times in a career that saw him win the Turkish domestic championship with Bursaspor.

Ivankov makes the list having scored just one goal more than one of the most iconic South American keepers of all time: René Higuita. Higuita is, of course, known to all football fans as the guy with enough balls to try and save a shot with a scorpion kick against England in 1995. As well known off the pitch as on it, the Colombian spent seven months in prison after becoming entangled in a kidnapping case, although he was later released without charge. Later in his career he tested positive for cocaine while playing for an Ecuadoran club, and in 2005 he had plastic surgery that dramatically changed his appearance.

Back to the pitch though, and it wouldn’t be wrong to group Higuita with that crop of keepers who are confident on the ball that were mentioned earlier in the article. He often took things further though, and played almost as a defensive sweeper, making mad dashes out of his box in order to clear balls or to try and build play up. Of course, when his antics translated to goal scoring opportunities or heroic clearances he was hailed as a legend, but these attempts often failed, making him the bane of his manager’s existence. Known, with good reason, as El Loco (The Madman), he retired in 2010 with 41 goals to his name.

If you’re wondering about English goalkeepers, then you’re probably going to be disappointed. Ernie Scattergood, George Kitchen and Arnold Birch all scored more than five goals, but they played in the early part of the 20th century. Former England keeper Paul Robinson has two to his name, making him the highest scoring currently active English keeper. Both of his goals were quite remarkable—one scored as a header from a corner, the other an amazing free kick from near his own box—and a rare treat for fans of goal-scoring goalies, but they were far from the consistent astuteness of the South American legends.