Wesley Sneijder used to be the best player in the world. No, really. By which I mean he was the key performer for the most successful team of a specific season (perhaps you know what I’m talking about) as well as joint top-scoring in the World Cup for the beaten finalists. Certainly there was an element of fortune to some of those goals (one against Brazil in particular springs to mind), and his performance was a little overhyped in that tournament, but in the 2009-10 Champions League he was excellent (and in Serie A and the Coppa Italia, only less so), and – if not then, then certainly by now – his performances for his club that year were overlooked.

Indeed, overlooked at the highest level: though he won some individual awards and accolades, the Ballon D’Or was denied him, in favour of a Messi who was sub-par by his own absurd/obscene standards that year, particularly in terms of actually winning in Europe and doing well (individually and in terms of progressing) in the World Cup, which are supposed to be the two biggest stages in football.

Fuck that. Seriously, fuck it. Add it to the burning furnace of my (our?) loathing for FIFA [Fucking Idiotic Fucking Arseholes] and their reptilian ilk. Plenty of readers may feel that Messi did deserve it or that Sneijder didn’t, in which case fair enough. I can’t agree and I feel that the nature of media attention in football is such that we don’t even really remember who was how good even a couple of years ago, plus I guess no one watches Serie A anymore anyway (shame that). Some readers may not see why it’s a big deal. Well I think it is. 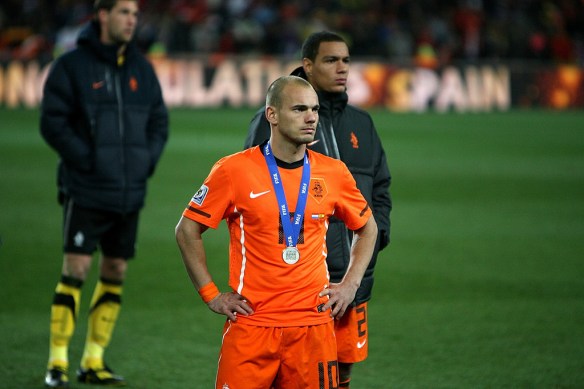 The likes of FIFA and UEFA have an advantage over the other spinners of dream fabric out there (like the sports press), in that as official international football organisations their awards carry a lot of weight, and also have an ‘indelible fabric of history and therefore entirely correct’ feel to them: hence we forget as time goes on. Indeed, Sneijder sort of became forgotten (except by whoever was writing Manyoo transfer rumours) from that point, as he struggled for form and with injuries. Inter’s own struggles didn’t help in this regard, and for anyone doubting whether he’s retained his quality I’d suggest examining his performances in Euro 2012, where he tried his best to carry the Dutch.

So, to return to why I care so much: I find the lovely soft chirpy cool buoyant fair honourable friendly epic feelgood awesome FUN (and above all of course real) narrative spun at us via the excessive hyperbole and hysteria of television montages, back page headlines, World Cup adverts, awards ceremonies and the like to be fucking revolting and disgusting and deeply unreal. Which is why I’m gnawing this bone far beyond the point where my actual liking for Wesley Sneijder ought to have taken me.

Anyway, enough. I have two things to leave with you as parting thoughts. The first is a montage of Wesley Sneijder’s passes. There was a cracking all-round montage of his 2009-10 year but I’ve lost it (or perhaps it was taken down by our lizard mateys), and I personally find goals montages for non-strikers to be missing the point: sure, awesome goals are awesome goals, but in the world of football montages the skills and passes categories often feel like afterthoughts. You can always find one if you want, and it might be worth it, as he scores some belters. The second is a William S. Burroughs quotation which I’ve co-opted. See if you can guess what it was about before I got my grubby mitts on it:

“Football as FIFA disseminate it is not so much a nightmare as a non-dream. The FIFA non-dream is precisely a move to wipe the dream out of existence. The dream is a spontaneous happening and therefore dangerous to a control system set up by the non-dreamers.” (The Adding Machine)