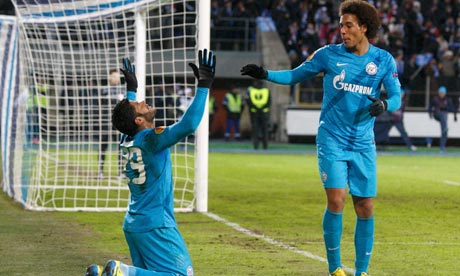 For Russian football fans, Rubin midfielder Pablo Orbaiz’s stoppage-time goal in Madrid was just the exclamation point to a thrilling Valentine’s Day in the Europa League. Zenit and Anzhi kicked the night off in style, celebrating 2-0 and 3-1 victories over Liverpool and Hannover 96. Several hours later, Rubin’s Spanish mercenary silenced the Estadio Vincente Calderon crowd, breaking away for his team’s second goal as Atletico goalie Sergio Asenjo tried vainly to catch him from behind.

Rubin Kazan’s 2-0 win over the cup holders, secured just before 2 am Moscow time, came as a shock in Russia. Many recalled the club’s 2009 Champions League victory in Barcelona, as well as coach Kurban Berdiyev’s ability to “park the bus” after taking early leads. Indeed, Karadeniz slotted home for Rubin in just the sixth minute, and, despite red for captain Roman Sharonov just before halftime, the visitors held firm. When Asenjo came down in the fifth minute of extra time for a corner, Orbaiz needed only one well-timed pass from Eremenko to ruin Atletico’s night for good.

Zenit – Liverpool made the most headlines leading up to the 14th, though very few had anything to do with football. “Prejudice in St. Petersburg” squawked the papers and talking heads on TV. The talk centered on the Selection 12 manifesto released in December by Landscrona, a Zenit fan club, in which the authors referred to the absence of black players on Zenit’s roster as a “valuable tradition” and stated their opposition to gay players.

Not surprisingly, those hoping for scandal during the match itself were disappointed. Fans at Zenit’s Petrovsky Stadium were on their best behavior and the players on the pitch rewarded them with an exciting, back-and-forth affair. Brazilian international Hulk and 37-year-old Russian veteran Sergei Semak scored three minutes apart in the second half to give the home team a solid advantage ahead of tonight’s return leg in Liverpool.

Further south, in Moscow’s Luzhniki Stadium, displaced hosts Anzhi Makhachkala rallied from an early 1-0 deficit to handle Hannover 96, 3-1. Compared to a sold-out, raucous Petrovsky and half-full Estadio Vincente Calderon; Luzhniki, at perhaps 10% capacity, with mounds of snow lining the perimeter of the field, looked as dead and artificial as the venue’s artificial pitch. Anzhi fans can’t be faulted for the poor attendance, though; their team is forced to play 1000 miles from balmy Dagestan after UEFA’s ban last summer on European competition in the southern Russian republic. 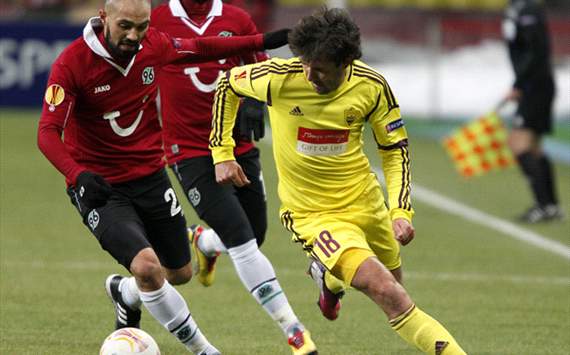 In any event, goals from Samuel Eto’o, Odil Akhmedov and Mbarak Boussoufa, as well as impressive debuts by winter signings Willian and Andrey Eschenko sent the fans home happy, especially those facing a 45-hour bus ride back to Makhachkala.

Now Anzhi and Liverpool head west, while Rubin take their turn in Luzhniki, uprooted not by security concerns, but a poor pitch and nasty Kazan winter. If the Russian clubs can finish what they began, favorable ties await in the round of 16.

Anzhi would meet either Newcastle or Metalist Kharkiv, who wrap up in Ukraine after a scoreless draw in England. Dnipro trail Basel 2-0 following disappointment in Switzerland; either club would be a manageable opponent for Zenit. Rubin, if they can hold Falcao and co. at bay, are almost certain to face another Spanish club, mid-table Levante, who whitewashed Olympiacos 3-0 in Valencia last week. 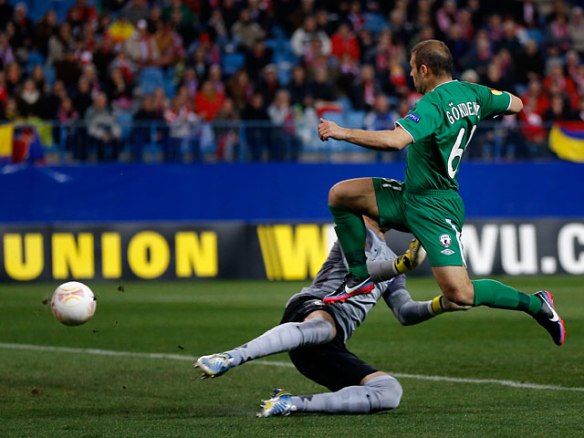 They would, however, be foolish to look too far ahead. Nine years ago, Rubin fell 3-2 on aggregate to Rapid Vienna in UEFA Cup qualifying, despite opening with a 2-0 victory in Austria. Anzhi and Zenit, meanwhile, will face hostile crowds determined to make progression for the Russian clubs as difficult as possible.

10. Rubin defensive back Ivan Marcano, responding to the media portrayal of his team as overly defense-minded:

“People who follow the Russian league know that Rubin try to maintain possession and take initiative.”

“I’m not overwhelmed by grief. Anzhi are a fantastic team.”

“Ties are not decided by one match. We’ve come to fight.”

“I’d like to note the play of our two wide backs, Eschenko and Zhirkov. Yuri [Zhirkov] played like he did in the old days.”

6. Zenit midfielder and captain Roman Shirokov, famous for criticizing his club’s fans in the past, on whether he enjoyed playing in front of the Petrovsky faithful again after Zenit received a two-match spectator ban to end the fall season:

“What do you think? It’s not comfortable to play without the fans.”

5. Hannover 96 manager Mirko Slomka, discussing the threat posed by Anzhi forward Lacina Traore, who was unavailable in the first leg:

“His height’s remarkable! He’s not the strongest in the air, however.”

“Perhaps my sending off helped the team bring back a two-goal advantage from Madrid.”

“The atmosphere at the stadium was excellent today. I’d like to thank everyone in St. Petersburg for the wonderful welcome.”

2. Rubin manager Kurban Berdiyev, on what he thought when Atletico’s goalkeeper came down for a set piece at the end of stoppage time:

“Don’t let them score… What else would I be thinking?!”

* Reference to the massive 16th-century cannon displayed in Moscow’s Kremlin, one of the world’s largest, though never used in battle.