In a nation eager to regain a top-six UEFA ranking, and the extra Champions League place that comes with it, the autumn European campaign was almost a complete disaster. Champions League failure and disappointing exits from CSKA and Dynamo in August left Anzhi and Rubin the only bright spots.

CSKA, currently atop the Premier League, lost 3-2 on aggregate to AIK in late summer, despite opening the tie with a 2-1 win in Stockholm. Dynamo, winless in their first five Premier League matches, went down 2-0 on aggregate to Stuttgart in the same qualifying round, joining CSKA one step from the group stage.

Just like the Army club, Dynamo excelled domestically after departing the Europa League, closing 2012 with a 10-0-4 record, including wins over Spartak, CSKA and Rubin. Only Anzhi and CSKA bettered that run, which stretched from late August to the beginning of the winter break in early December. Many attribute Dynamo and CSKA’s autumn success to their freedom to concentrate on domestic play, arguing the teams would not have performed so well if they were tested by midweek European matches. In hindsight, nonetheless, league-leading CSKA’s failure to advance even to the group stage looks bad for Russian football as a whole.

Zenit, slotted with AC Milan, Malaga and Anderlecht in the Champions League, were expected to coast through to the Round of 16 following their late-summer Hulk and Witsel acquisitions. Instead, they barely scraped into third, needing victory at the San Siro in December against a disinterested AC Milan to keep Anderlecht out of a Europa League spot.

Spartak, meanwhile, endured a bizarre campaign. Russian newspapers praised the Red-Whites’ Champions League opener in Barcelona, in which they led 2-1 in the second half before falling 3-2, victim to a late Messi brace. “Unafraid,” praised Sport-Express, while Sovetsky Sport played up the Russian for Red-Whites, switching “Krasno-Belye” to “Krasno-Smelye” – the “Red-Braves.” Two months later Barcelona put three past Spartak goalkeeper Andrei Dykan in the first half to condemn Spartak to fourth in their group and send manager Unai Emery packing.

The glimmer of hope, indeed, came from beyond Moscow and St. Petersburg. Anzhi Makhachkala and Rubin Kazan both reserved places in the Europa League round of 32 ahead of schedule and collected more UEFA points between them than the other four clubs combined. Now Zenit joins them in three intriguing ties that offer Russia a chance for redemption after the disappointment of 2012.

Zenit – Liverpool headlines the group. Two of the most prominent clubs left in the competition, the match-up has gained even more notoriety thanks to Zenit fan club Landscrona’s Selection 12 manifesto, released back in December. In addition to urging Zenit to sign players from the St. Petersburg area and Russia at large, before going elsewhere, Landscrona announced their opposition to signing gay players and dismissed charges of racism by explaining that the absence of black players “is simply a very important tradition…which allows the club to retain their identity.” 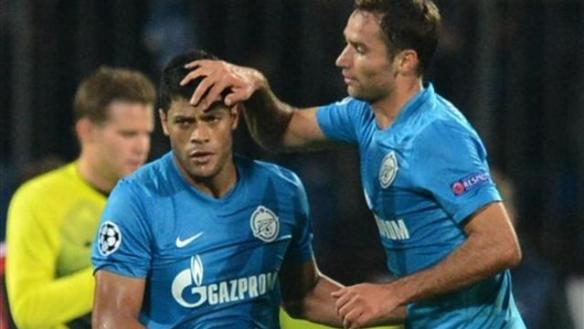 Though few Russians were surprised by the manifesto, given Landscrona’s notoriety within the country, foreign press gobbled up the scandal, only too happy to slot Zenit and the rest of Russian football by association into the sport’s “racist” and homophobic camp. The homophobia charges certainly stick…public opinion in St. Petersburg and throughout most of Russia runs very high against sexual minorities. Russia’s “racism” problem, however, is far less simple to categorize.

Landscrona’s statement, above all, reflected the rigid value system favored by most of Russia’s hardcore football fan clubs, which are generally anti-immigration, anti-Western and anti-minorities, rather than the wishes of most Zenit fans and supporters of other clubs. Landscrona’s greatest loss, once a black player finally suits up for the club, will not be the indignation of cheering for him, but rather the loss of the moral high ground within the Russian fan club world.

In the rest of Russia, football fanatics, along with their many crusades, are generally treated with derision. The indignation from Western Europe over Zenit’s “racism” problem, though a real concern, smacks of sensationalism and self-righteousness, rather than a nuanced understanding of the core issue facing professional football in Russia: Fan clubs invested with far too much influence and control in the running of their sport. As long as fanatics from the Moscow fan clubs come together at Russian national team matches to chant “White Power,” “Go Orthodox” and “Russkiye Vperyod” (translated “go ethnic Russians”), minorities will always be at risk of abuse in Russian football, whether they’re Muslim, black or gay.

Unfortunately for Russian clubs such as Zenit, until they refuse to address the beliefs of a passionate minority, their fans and city as a whole will be painted in broad, negative stripes.

The contrast with Liverpool is striking. The Merseysiders recently hosted a match in support of gay rights and employ a social inclusion officer. According to managing director Ian Ayre, the club has “a very strong social inclusion programme” and “takes it very seriously.”

On the pitch, both teams come into Thursday night’s clash somewhat timidly. Liverpool lost at home on Monday to WBA to further dent their hopes of European competition next season, let alone a top-four finish. Zenit also risk missing out on the Champions League, third in the league behind CSKA and Anzhi. A desire to pick up momentum in Europe will be tempered by bigger domestic concerns, but with Liverpool manager Brendan Rodgers sending a strong squad to St. Petersburg and Zenit’s first domestic match of 2013 still more than three weeks off, the talent and intensity on the field promises to be high. 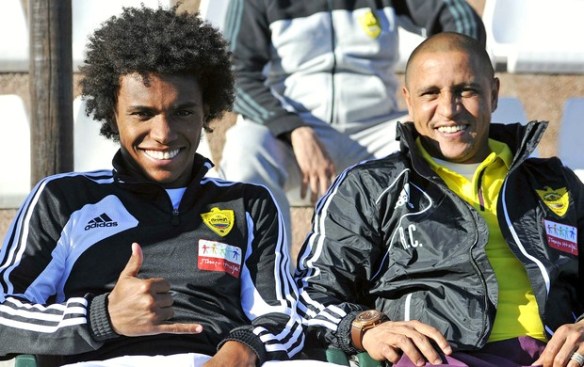 Russia’s other scandal-plagued club, Anzhi Makhachkala, approach their 2013 opener against Hannover 96 with great anticipation. Of any club remaining in the competition, Anzhi likely stand to gain the most from a successful campaign. Nearly unknown prior to the 2011-2012 season, the team from southern Russia has put together a daunting front line in two years: Samuel Eto’o, Lacina Traore, Mbarak Boussoufa, Yuri Zhirkov, and, most recently, Brazilian wunderkind Willian, last-minute £30 million transfer from Shakhtar Donetsk in January.

Much as Zenit’s failure to advance from their Champions League group dealt a blow to the club’s reputation, especially in light of the Hulk and Witsel acquisitions, an early exit at the hands of mid-table Bundesliga side Hannover 96 would deeply disappoint Anzhi management and supporters, given their star-studded roster. If they’re to build their brand in Europe, they must take advantage of every opportunity for exposure. Famous clubs like Chelsea, Tottenham and Inter remain in the Europa League, not to mention the potential for a second meeting with Liverpool, and Anzhi will put all they have into the competition as long as they’re around.

Hannover 96 advanced to the Europa League quarterfinals last season, their best European showing in club history, but have had to deal with numerous injuries this winter and come in as underdogs. Defenders Steven Cherundolo and Mario Eggiman and midfielder Lars Stindl are unavailable, and major scoring threat Mame Diouf is questionable for the match in Russia on Thursday.

Hannover’s biggest struggle will be on defence. They’ve allowed 39 goals in 21 appearances domestically, topped only by relegation-threatened Hoffenheim. If new Anzhi playmaker Willian finds adaptation to Guus Hiddink’s squad smooth, the Germans may struggle to keep pace with their opponents. From the other side, Anzhi lost their defensive lynchpin, Christopher Samba, to QPR in a surprise January swoop and may be just as susceptible to a shootout, despite letting in only 5 goals in 12 Europa League matches in 2012.

Rounding out the Russian clubs are Rubin Kazan, who travel to Madrid for the first leg of their tie with cup holders Atletico. Russian champions in 2008 and 2009, Kurban Berdyev’s side is often overlooked in the press, both at home and abroad.  Nonetheless, Rubin suffered their own dose of unsavory media attention Wednesday, when reports came out that midfielder Yann M’Vila, recently signed for £9.6 million, was under suspicion from French police for involvement with an under-age prostitute. The French international, apart from the potential criminal charges, suffered a knee injury in a Saturday friendly and is doubtful for Thursday’s clash. 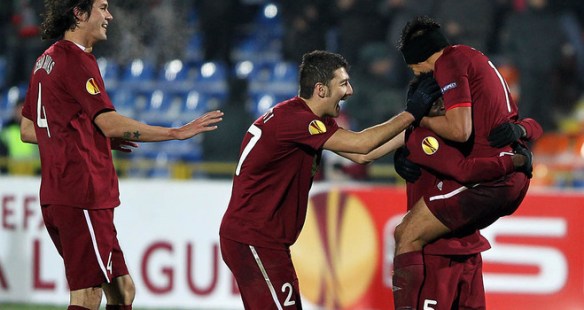 Atletico sit second in La Liga, four points clear of Real Madrid and almost certain to qualify automatically for Champions League group play next season. Perfect at home so far this season, they present the stiffest challenge for any of the Russian clubs in the Europa League.

Rubin are seventh in Russia, though only one point off fourth. The club is sturdy in defence, conceding only 19 goals in 19 appearances in the league, mirrored by Atletico’s similar 1:1 ratio in 23 La Liga matches, but the Spaniards’ attack is much more potent, striking 44 times to Rubin’s 26.

Berdyev, nearly forced out in December after 11 years with Rubin, is still confident about his side’s chances, “We have played against strong teams [this season] and I’m not afraid of tomorrow’s game.” Atletico, despite their status as reigning champions and impeccable home form, have expressed respect for the Russians. “There is no switching off,” said Atletico manager Diego Simeone. “We respect Rubin Kazan and know what they are capable of.”

With Champions League glory put on hold once more in Russia, all eyes will be on the Zenit-Anzhi-Rubin trio as they try to play into the spring and shore up the Russian league’s battered UEFA ranking. If they’ve anything else to unite them, representatives of two Muslim republics and the country’s cultural capital, then it may be their shared recent rise to prominence.

Until Zenit’s breakthrough title in 2007, Moscow clubs had topped the Russian league every year since 1992, apart from Alania Vladikavkaz’s 1995 championship. Now, however, Rubin and Zenit have shared the past five titles and Anzhi look well positioned to continue that provincial streak in the spring. Though performing on Europe’s second stage, Russia’s Europa League representatives this February speak to the growing depth and changing face of Russian football.

One thought on “Stakes High for Russia in Europa League”