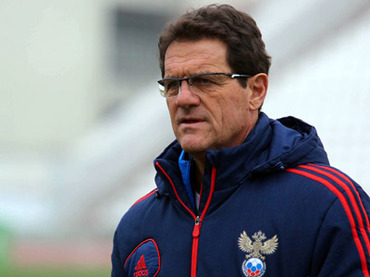 Almost eight months have passed since Russia crashed out of Euro 2012, falling 1-0 to the Greeks on June 16 in Warsaw and failing to advance from a group with Poland, Greece and the Czech Republic. Four years earlier, a nearly identical squad had reached the tournament Semi-Finals.

Back home, anger and disappointment over the result exploded on Internet forums, radio shows, TV programmes, newspapers, with politicians even stepping in to suggest various punishments for the players that had disgraced Russia abroad.

The reason for such intense despair lay not in the team’s 2012 collapse, a rather typical result since the break-up of the Soviet Union, but rather in the fear that Russian football talent was drying up. If this golden generation could not find greatness, what hope was there for the nation in 2018 when they would host the World Cup?

Indeed, success in Poland would have been but a temporary distraction from the fear and uncertainty over Russia’s next football generation, slated to represent the nation on its largest stage yet. Shame, both realised and that still to come, hung heavy over the country in the summer of 2012.

No one predicted what came next. In six matches between August and November, two friendlies and four 2014 World Cup qualifying matches, the national team went undefeated, banking 12 points in Group F, while battling to draws with Ivory Coast and the USA. The high point, a 1-0 victory over Portugal in Moscow before 72,000 fans, gave the Russians firm control of their 2014 destiny.

Fabio Capello, brought on in July to replace Dick Advocaat, met the summer critics halfway in their demands for an overhaul of the ageing team. After one appearance in August against Ivory Coast, Roman Pavlyuchenko and Andrei Arshavin missed out on future call-ups in 2012. Yuri Zhirkov, nursing injuries, was also left behind. Midfielder Konstantin Zyryanov and goalkeeper Vyacheslav Malafeev, meanwhile, announced their retirement from international competition.

Apart from those five, Capello relied on several other national team veterans, unused or unavailable in Poland: goalkeeper Igor Akinfeev, defender Vasili Berezutski and midfielder Vladimir Bystrov. Akinfeev, returned as number one goalkeeper with Malafeev’s retirement, Berezutski recovered from an injury in the spring and Bystrov made a comeback after rarely playing for Dick Advocaat.

Still, no one has accused the Russian manager of entirely ignoring the next generation. 21-year-old forward Aleksandr Kokorin locked down a spot in the fall, starting in the final three qualifying matches. 26-year-old midfielder Viktor Fayzulin debuted in August’s Ivory Coast friendly and comes on regularly, scoring against both Northern Ireland and Israel in Group F play in September. Fellow debutant Andrei Eschenko, a 28-year-old wingback, also earned significant time, making his first start in the final official match of 2012, Russia’s 1-0 home defeat of Azerbaijan. And Dmitri Kombarov, Spartak’s 26-year-old wide midfielder, took over for Yuri Zhirkov, starting every World Cup qualifying match.

The Russian press praises Capello most, however, for his experimentation in friendlies. The 66-year-old Italian has already called on seven regulars from the Russian Under-21 squad, is through to Euro 2013 next summer. Forwards Fedor Smolov and Maksim Grigoryev, midfielders Denis Cheryshev, Oleg Shatov and Magomed Ozdoev, and defender Arseniy Logashov have made national team debuts and are expected to battle increasingly for regular time on the field. 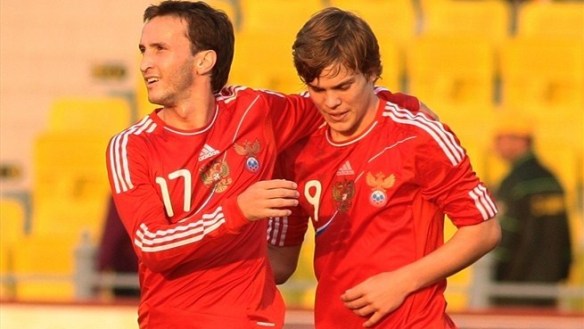 And, lest we forget, explosive CSKA midfielder Alan Dzagoev, who bagged three goals in Poland over the summer, remains one of the nation’s brightest hopes in both 2014 and 2018, at which time he’ll be just 28 years old. He’s played infrequently for Capello, but is still tipped by many, including Roman Shirokov, to be one of the team’s leaders down the road, alongside Kokorin, 2012’s other bright revelation on the football pitch.

At present, though, Capello certainly appears focused on Russia’s 2014 World Cup hopes. Despite a gradual influx of young blood, the roster’s average age in the summer of 2014, if the core from the autumn campaign remains in place, would be roughly 29. Only Akinfeev, Dzagoev, Kokorin, Fayzulin and Kombarov would likely be available in 2018.

As long as they continue to win, the public is happy about the transition, gradual though it may be. Dick Advocaat made almost no changes from the 2008 bronze medal-winning squad during his tenure; Shirokov, Denisov, and Dzagoev the primary exceptions. Looking back, despite Russia’s romp through Euro qualifying, his two years at the helm have been dismissed as a near-total waste.

Capello, meanwhile, has set about restoring national pride in the team and his efforts extend between the results and roster make-up. His decision to retain so many Euro 2012 participants was risky, given the gossip and scandal that accompanied the team in the tournament’s aftermath. The side was lambasted for reported incentive ultimatums, spoiled behaviour at their luxury downtown Warsaw hotel, and, most damningly, indifference in their 1-0 loss to Greece that clinched elimination.

Remarkably, Kerzhakov, Denisov, Anyukov and Ignashevich have been able to bounce back thanks to Capello’s full confidence. The bad taste they and their teammates left eight months ago is slowly fading. Andrei Arshavin’s absence from the squad, the biggest public scapegoat in Poland,  has perhaps helped, but Don Fabio, as he’s frequently referred to in the press, has also restored the national team’s image in other ways.

Training camps, for one, have become much more business-like. Capello allows the media very little time with the team, frequently arranges two practices a day, and, thus far, has limited the players’ free time.

The second major change has come in the foreign manager’s own approach to his duties. Advocaat, certainly, but also Guus Hiddink, came under criticism for what many perceived as a lackadaisical approach to talent evaluation and commitment to understanding the inner workings of Russian football. Whether Capello is truly more dedicated to his job or simply a better showman, the media is effusive in its praise of his commitment to scouting at Russian league matches and making himself available to the Russian Football Union.

His diligence, many feel, is reflected in the increase in national team call-ups for youngsters and players from provincial clubs such as Terek Grozny, most recently, which received little attention in the past from national team managers.

Overall, there is relief that Russia has received its money’s worth with Capello. At 10m Euros annually, anything less would be unthinkable, but, sadly, an all too-familiar scenario for Russian football. Only eight months, Advocaat departed ignominiously, the highest-paid coach at Euro 2012 by a wide margin with his 7m Euro salary. 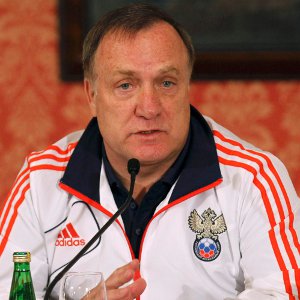 Capello’s predecessor, Dick Advocaat, was ultimately a failure as coach of Russia

Question marks remain as Russia faces tricky away matches in Northern Ireland and Portugal in March and June. Capello has restricted the squad’s play up front, placing a higher premium on defence than either Hiddink or Advocaat did during the past six years. Though successful in obtaining results, some have complained about Russia’s aesthetic decline. The complaint may seem trivial, but match attendance and national fervour for the team remain low despite a seven-game unbeaten streak and the lack of explosiveness and pace in attack have been seen as part of the problem.

For now, Capello will be hardly troubled by the criticism, but it does touch on the primary issue that will determine his legacy years from now as Russia manager, the development of fresh talent up front, as well as at the centre back positions.

If Capello is not successful injecting even more fresh blood into the national team by 2014, even a relatively successful performance at the World Cup will be viewed as fool’s gold compared with the much higher stakes riding on Russia’s 2018 hopes.

Though the centre midfield and wingback positions look well-stocked for the foreseeable future, Capello must address Russia’s strike force and centre back positions.

The team’s offensive potency decreased in the fall due to the new emphasis on defence, but also because of Arshavin and Pavlyuchenko’s departures, both of whom were brilliant up front for Russia for many years. Capello will be expected to develop Fedor Smolov, Aleksandr Kokorin, Alan Dazagoev, Maksim Grigoryev and others in the next several years, lest the offence stagnate entirely once the other veterans, Vladimir Bystrov, Yuri Zhirkov, Roman Shirokov and Aleksandr Kerzhakov, also depart.

Centre backs Vasili Berezutski and Sergei Ignashevich, meanwhile, are 30 and 33 years old, respectively, have been lynchpins in Russia’s defence since 2005. Taras Burlak and Vladimir Granat are the top candidates to take over, but both have very little international experience as a result of the veterans’ iron grip on the position for most of a decade.

On Wednesday, Russia coasted to a 2-0 victory over Iceland in their first appearance in 2013. The only real surprise in the starting line-up was a fully healthy Yuri Zhirkov, who replaced Aleksandr Kokorin, and played his first minutes for the team since Euro 2012.

Kokorin missed the entire training camp after Dynamo Moscow coach Dan Petrescu refused to release the young forward, Vladimir Granat and goalkeeper Anton Shunin for five days of national team duty, insisting on his right to keep them with the team until February 4.  Capello, in response, rescinded his invitation and brought on Anzhi’s Oleg Shatov and Rubin goalkeeper Sergey Ryzhikov.

In the second half, a glut of substitutes saw time: Smolov, Kombarov, Shatov, Gabulov, Glushakov and Nababkin. Shatov made the most noise, blasting Russia’s second goal past Iceland keeper Halldarsson twenty minutes into his national team debut.

The team next faces Northern Ireland in Belfast on March 22 in World Cup qualifying. Fabio Capello’s tenure has exceeded all expectations, with the team consistent and productive in recent matches and outside distractions kept to a minimum, the Dynamo dust-up notwithstanding.

Nonetheless, the real work is still to be done. Russia, one should not forget, opened their Euro 2012 campaign with a 4-1 romp over group favourites, Czech Republic. All we remember, however, is the calamitous conclusion. This squad will do well to keep its nose to the grindstone, lest it repeat the same sorry trajectory.