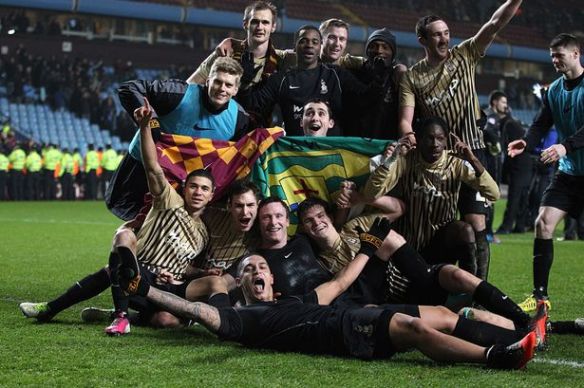 It’s 24th January 2000 and the Manic Street Preachers are Number 1 in the music charts in the UK. The world is rejoicing as the Millennium Bug hasn’t surfaced and robots have not taken over the land. Carlos Roa has just retired from goalkeeping duties at Real Mallorca due to his Adventist beliefs however.

Two days before, Bradford City defeated fellow relegation rivals Watford at Valley Parade 3-2 in the FA Carling Premiership. The Bantams were making expensive signings desperate to fend off relegation from English football’s promised land. Meanwhile, Swansea City recorded a 1-0 home victory at their Vetch Field stadium against Macclesfield Town in the Nationwide Third Division (now League Two) to edge closer to costly automatic promotion. Their progression through to the present day could not have been forecast.

Step forward approximately seven years to 13th January 2007 and Mika reigns supreme atop of the music charts. Tony Blair is preparing to hand over Prime Ministerial duties to Gordon Brown. And in Argentina, Carlos Roa is now enjoying his second retirement having returned from his first sabbatical to complete his contract with Mallorca less than a year later.

In League One Bradford City are playing Swansea City with both having suffered similar situations regarding their grave finances. Bradford were relegated from the Premier League and placed into financial administration where they were essentially asset stripped as their best players were sold to reduce costs. A predicament that left them certain for the successive relegation that followed. Swansea, following the promotion to League One aforementioned, then suffered serious financial difficulty and were relegated immediately. After two and a half seasons in hiatus they were then purchased in 2003 for £1 by Tony Petty and under the new ownership model in South Wales saw a second promotion his first full season.

It was the last time the sides met. The game finished 2-2 with both of Bradford’s goals coming from Dean Windass to cancel out Kristian O’Leary and Adebayo Akinfenwa’s strikes for Swansea. And although the match was drawn, the mutual convergence ended here as the clubs continued the trend of heading in very different directions. The Swans were well on their way for automatic promotion while The Bantams headed firmly toward another relegation. 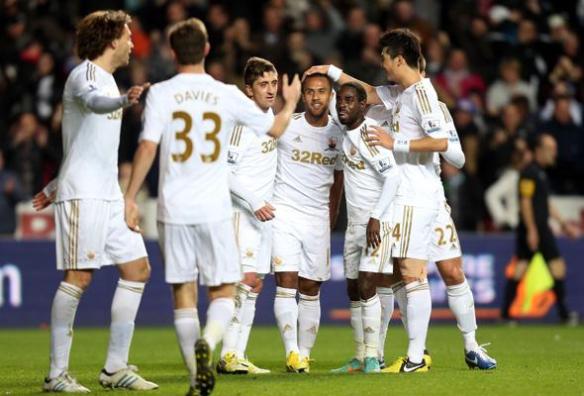 Swansea City are on their way to Wembley

The rise of Swansea City has been well documented since. Along with the development of their Liberty Stadium, the management of Kenny Jackett, Roberto Martinez, Paulo Sousa, Brendan Rodgers and now Michael Laudrup have all overseen the transition of this club to become an established Premier League side. Each manager has added to the development of the short, intricate passing and fluid movement style that has brought this success despite Martinez, Sousa and Rodgers being signed by bigger clubs. The fans of Bradford City in the meantime have watched from the lower tier of England’s 92 teams dreaming of a return. Their team has not changed divisions since.

Today, the Capital One Cup Final to be played at Wembley on 24th February 2013 is to be contested by these two clubs in front of 80,000 fans who may never see their team in such an event again. Admittedly Bradford did win a pre-war FA Cup  in 1911 but few fans will be alive to see both. Two days ago, the Bantams, having already overcome Watford, Wigan and Arsenal, then went on to beat Aston Villa and last night Swansea conquered Champions League holders Chelsea in the semi finals.

Whether it is Swansea’s meteoric rise in English football through the past 8 years since their promotion from League Two or Bradford’s heroics in knocking out Premier League giants throughout the competition this season that captures your support; one club will rise from the bottom to the top. It may only be a day in the media’s glare but for the fans of the victors, it will be a lifelong memory.

May the best team win.

One thought on “Bantams Set for Swansong at Wembley”