False Nine Russian correspondent, Andy Shenk, looks at the problems facing Russian clubs in their efforts to persuade fans to come to games ahead of major improvements being made to stadiums all over the country, with one eye on the 2018 World Cup Russia hosts…

Russia is on the cusp of a football stadium boom. The new venues are sorely needed: 12 of the country’s 16 Premier League teams play in Soviet-era arenas with minimal comfort, poor lighting, and inadequate drainage on the pitch.

Several of the stadium projects have been in the works for years: Moscow clubs Spartak, CSKA and Dynamo plus Rubin Kazan, Zenit St Petersburg and Sochi (the 2014 Olympic Stadium will be transformed into a football arena after the competition ends) announced construction plans years ago. A second wave came with private investment in several provincial clubs, Anzhi Makhachkala and Krasnodar foremost, although Alania Vladikavkaz have also recently announced plans for a new stadium. The 2018 World Cup is responsible for the biggest group of planned stadiums, eight in total, which will join the Rubin, Spartak, Zenit and Sochi arenas on the world’s largest stage.

Stadium construction signals an aggressive effort to increase the popularity of Russian football among the public. With a season that now stretches from early March to December, casual fans have been hesitant to come out much of the year. On top of the frigid temperatures, poorly maintained fields turn soupy each spring and fall, significantly affecting the quality of play.

The third inhibitor for many are Russia’s notorious fan clubs and the violence (or threat of violence) that can attend matches. Sergey Ivanov, head of President Vladimir Putin’s administration, recently disparaged the stadium atmosphere, “Swearing, charges, smoke in the air…A normal person in Russia should be revulsed at the idea of going to a football match.” Sitting in the VIP section, he likely avoids the multiple body frisks regular fans endure simply to enter many stadiums.

Landscrona, Fratria, UnitedSouth, CSKA Ultras and other fan groupings are furious, but legislation slowly working its way through the Russian Duma and Russian Football Union proposes increased fines for misbehaviour, more efficient security and IDs when purchasing tickets. Proponents of the changes hope to make matches safer and more appealing to the general public, even if they alienate many of Russia’s fan clubs. Modern stadiums equipped with the latest technology and security features will play perfectly into the hands of officials who need to raise Russia’s image in advance of the World Cup. 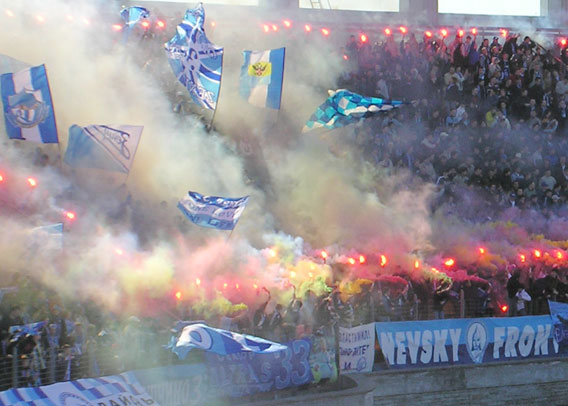 Beyond appearances, Russian football must attract more fans if clubs ever hope to become profitable. Through the first 19 weeks of the 2012-13 Russian Premier League season, attendance averaged 11,197 with stadiums filled to 43% capacity, comparable to attendance in the top Belgian and Portuguese leagues. Russia, of course, has the world’s ninth largest population, while Belgium and Portugal are 75th and 79th, respectively.

Of even greater concern, ticket prices in Russia’s Premier League range from 3€ to 40€ at most stadiums, with the vast majority of sales falling in the 3-10€ range (roughly equivalent to a range of £2.50-£8.30). The average budget in the league in 2012, meanwhile, came to $85 million, the median – $58 million. To top it all off, the league currently generates zero television revenue.

Russian clubs are making a big gamble that football attendance and revenues will rise with the introduction of modern stadiums that can protect fans from the harsh weather and help to weed out the less desirable elements in the stands. Improved pitches and HD-quality lighting will also hopefully boost TV audiences and revenues. The investment may or may not pay off. In 1987, the top Soviet league outdrew the Bundesliga by an average of 9,000 fans. 25 years later, the 2nd Bundesliga outdrew the Russian Premier League by an average of 4,000. Does Russia have a similar football boom in its future to accompany the 18 new stadiums expected to open by 2018?

Now for a brief look at the stadium projects already underway across Russia. Anzhi and Rubin have nearly completed their arenas, while Sochi, Spartak, CSKA and Zenit are at various stages in the process.

It should be noted that three arenas have been built in Russia in the last 12 years: Arena Khimki outside of Moscow, Dynamo and CSKA’s temporary home; the Lokomotiv Stadium in Moscow; and Akhmet-Arena in Grozny, home to Terek. None of them will be used for the World Cup, however, with Akhmet-Arena boasting the largest capacity, 30,000.

The additional 12 stadiums to be built by 2018 will be in the following cities: Moscow (Dynamo* and Luzhinki* Stadiums), Krasnodar (Krasnodar and Kuban Stadiums), Vladikavkaz, Saransk, Yekaterinburg*, Nizhny Novgorod, Kaliningrad, Rostov, Volgograd and Samara. 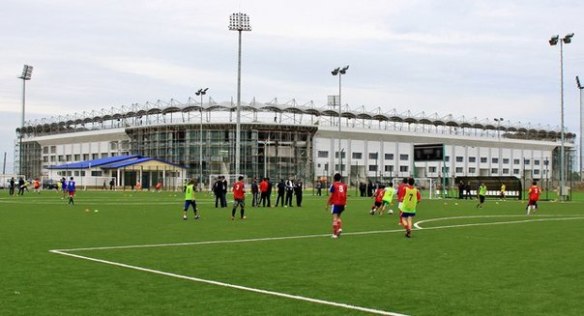 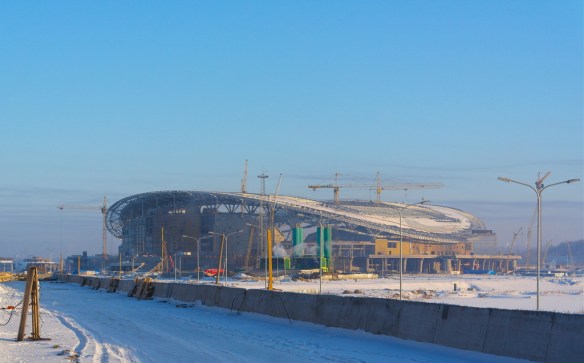 Zenit (stadium yet to be named), St. Petersburg

Est. completion date: Must be ready for Confederations Cup in 2017 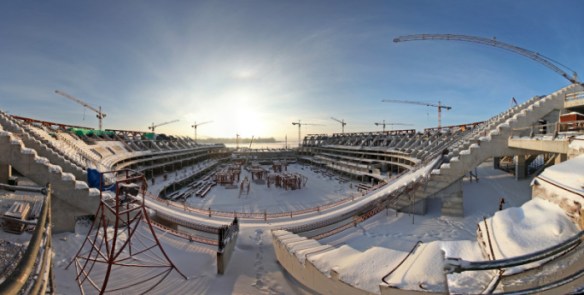 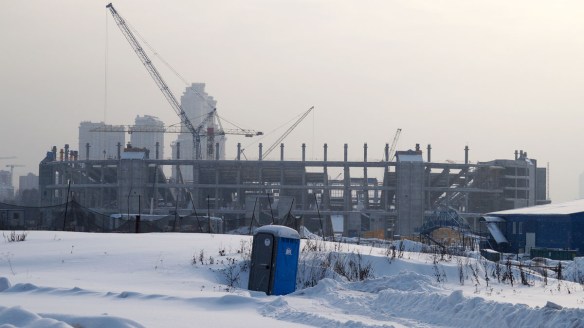 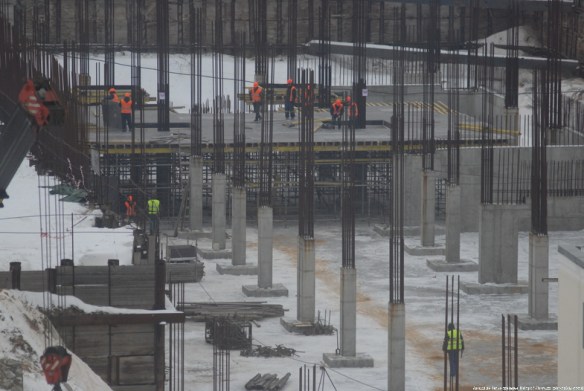 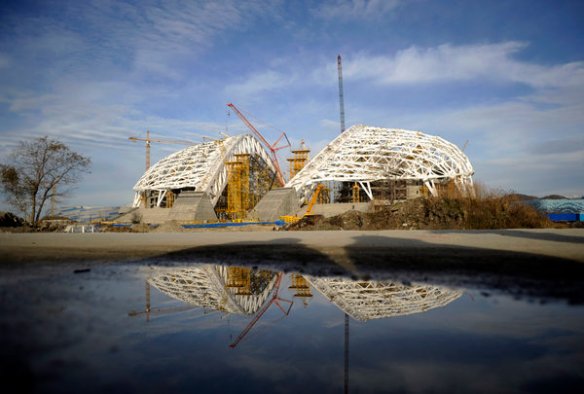