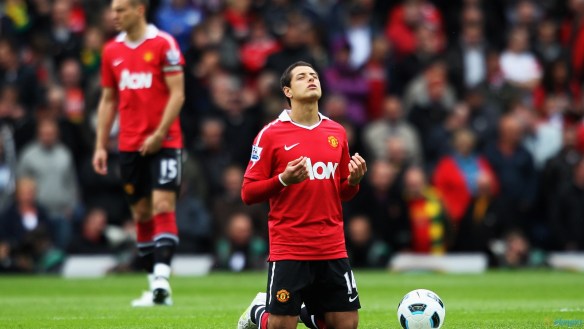 So far this season Javier Hernandez has netted 12 goals in 21 appearances and is well on the way to eclipsing his first season’s effort of 20 goals. Hernandez has also reached the same amount of goals he scored for United last season where he seemed to struggle, experiencing a mild affliction of the dreaded ‘second season syndrome’. After scoring three in his last two outings Hernandez, still at the tender age of 24, is back on track and showcasing more of the talent he did when he first arrived in England.

Javier Hernandez is now a crucial part of a deadly frontline alongside Robin Van Persie, Wayne Rooney and Danny Welbeck; it is a testament to his quality that he even gets a look in. He is a pure box player with the ability to score in the most congested of areas, seemingly acting instinctively. His manager Sir Alex Ferguson has likened the Mexican to Ole Gunnar Solskjaer; the Mexican’s awareness, positioning and finishing in the box bears an uncanny resemblance to his Norwegian predecessor. Similarly, Hernandez finds himself as an understudy to a prolific strike force, despite being one of the most feared marksman in the league.

In Manchester United’s 4-0 win at Wigan Athletic on New Year’s Day, Hernandez demonstrated his fox in the box ability after breaking the deadlock by pouncing on a rebound from an Al-Habsi spill. Having set up up Van Persie for United’s second by breaking from the right, Chicharito once again found himself in the right place at the right time to bag United’s third. A Van Persie free kick hit the wall only to fall to Hernandez who instinctively found the back of the net.

The Mexican forward has a goals per game ratio of just over one every other game so far this season for United and has done the same for Mexico in 2012. As well as his impressive scoring record Hernandez now adds a great deal of flexibility to United. He can play as a lone striker or winger in a 4-3-3 or a second striker in a 4-4-2, leaving Ferguson with a slight selection headache in a squad possessing an array of forward talent. Equally the humble attitude that Hernandez possesses leaves him more than happy to wait on the bench before being introduced late in a game as an impact substitute.

His all-round game has come on leaps and bounds since his impressive debut season, which ended in an anonymous display during Manchester United’s dispiriting 3-1 defeat to Barcelona in the Champions League Final. Fears that the Mexican was little more than a poacher – a luxury that could not afford to be indulged in – have been abated as he has adapted his style of play to that which Ferguson demands. Most significantly he, like Solskjaer before him, has developed an ominous propensity for scoring significant goals – three winning goals so far this season at Aston Villa, Chelsea and at home to Newcastle United on Boxing Day. 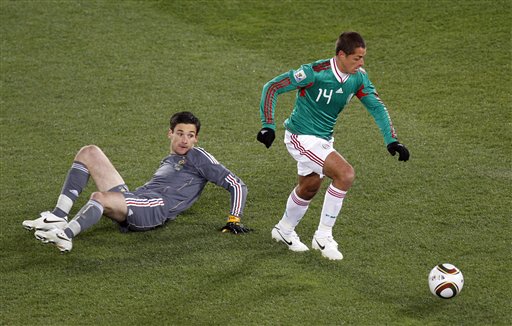 When Chicarito scored for Mexico in the 2-0 victory over France in the 2010 World Cup, “little pea” emulated his grandfather in doing the same thing he’d done at the 1954 World cup at the same age. While his father never scored at a World Cup he was at least present on home turf in 1986. Three generations of footballers and three separate family appearances at the biggest stage is something that is seldom seen in football today.

Chicharito’s grandfather, Tomas Balcazar, was a member of one of the most successful Mexican teams in the history of the Primera. He was part of the Campeonisimo era where Guadalajara won 8 league titles in 10 years. Balcazar’s contribution to the national team, like Chicharito, came in the group stages, but of the 1954 World Cup when he thought he’d grabbed Mexico a late equaliser against France only to be denied by a late penalty. In the previous match Mexico were thrashed 5-0 Brazil. They finished without a point and bottom of the group.

Balcazar’s son-in-law and Chicharito’s father, Javier Hernandez Gutierrez, led a slightly less prestigious career but not lacking of incident. He spent most of his time at Tecos where he played as an advanced midfielder making over 200 appearances. What made him a cult hero however was not specifically his talent but upon Tecos’ relegation he returned to his first club to help them to promotion in 1993. Internationally Hernandez senior’s career was cut short by Mexico’s exclusion from the 1990 World Cup where they were not allowed to play due to the fielding of over-age players in the previous year’s Olympics. Many Mexicans see the 1990 team as one of their golden generations and a real missed opportunity, with a team that included the likes of Hugo Sanchez. 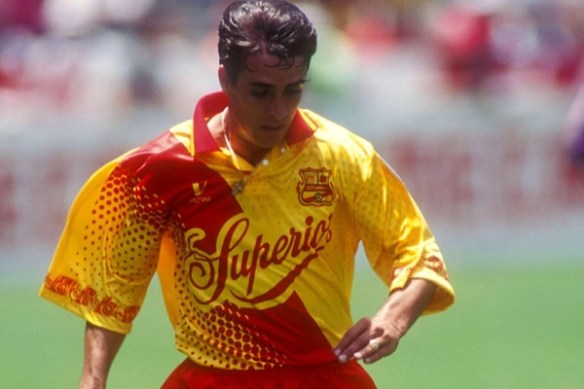 Chicharito’s father playing for Estudiantes Tecos in the 1990s

Hernandez Gutierrez, nicknamed “pea” because of his green eyes, had a brief spell in management but it was the emergence of his talented son that caused him to hand in his resignation. Hernandez Guiterrez was the manager of Guadalajara reserves but requested permission to take time off from his duties to watch his son make his World Cup debut. Permission was denied, so he quit.

Chicharito’s transfer to Manchester United was concealed to the extent that not even his family knew. With a number of European clubs interested he flew to England to finalise the deal. His family were told he was going to Atlanta to play in a friendly and even his agent was kept in the dark. The transfer was sealed with the agreement to arrange a friendly in which Hernandez would play the first half for Chivas and the second for United. He scored against his new club in the first half but failed to find the net against his boyhood team in the second. Chivas eventually ran out 3-2 winners.

What is more remarkable about the 24 year old is his down-to-earth level-headedness; a product of his humble background. From a catholic upbringing he doesn’t indulge in some of the off-field discrepancies of his peers. To somewhat highlight that point would be to note that he is the Mexican ambassador for Unicef. In charity press conferences he is asked about football and his career but declines to comment citing only his responsibility to the charity.

The fee United paid was reported to be around £10 million which in today’s transfer market can unquestionably be described as an all out bargain. But what is most impressive about the forward is the fact that he seems to have by and large continued the exact same scoring form he enjoyed in Mexico. Even from when he first arrived he seemed to slip effortlessly into the Premier League. Despite last season’s slight drop in form, it is now doubtless that, even with world-class strikers, ahead of him Chicharito will continue to throw in his cap and work hard to stay in Ferguson’s plans.

Will writes for The Football Fanzine.

6 thoughts on “Third Generation Thoroughbred Hernandez Back To His Best”