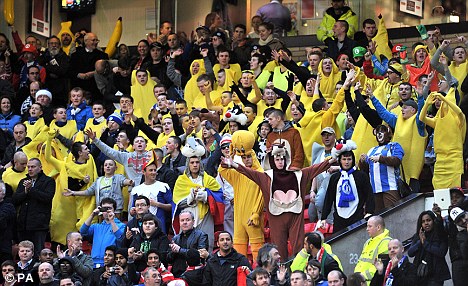 After the first and last games of the season, it’s the date that everybody looks to when the fixture lists are released: “Who have we got on Boxing Day?” And with good reason too. Traditionally teams played their local rivals at this time of year to save fans from making long journeys. That’s not the case anymore; Newcastle fans have a 300 mile round trip to Old Trafford this year; and I think the game suffers for it, but there’s still something about a Boxing Day atmosphere that stirs the heart.

Maybe because it’s a time the whole family get wrapped up for the cold weather and go to watch their heroes together, or conversely, it could be the relief of escaping your extended family, who have been an all too present fixture in your life over the festive period. Maybe we’re all just still a bit drunk. Whatever the reason, there isn’t another date in the footballing calendar quite like it, and for me, that’s reason enough on its own not to follow the continental example and introduce a winter break in our English game.

Games on Boxing Day have been a feature since 1860, when Hallam took on Sheffield FC at Sandygate Road. It was dubbed the “Rules Derby” because it was played under Sheffield rules, which introduced corners, throw-ins and headers to the game. It finished 2-0 to Sheffield. Hallam still play their football at Sandygate which is now recognised as the oldest ground in the world, and their club president is none other than ex-Premier League referee Uriah Rennie. I  wonder if he has them doing the elaborate pre-match warm-ups he used to be famous for.

Every football fan has a favourite Boxing Day memory they recall fondly. For me it’s watching my team Bolton beat Newcastle 4-3 at The Reebok, before later trying to recreate Jay-Jay Okocha’s opener, Michael Ricketts’ double and, most trickily of all, Ricardo Gardner’s stunner of a free-kick with the brand new Subbuteo game I got that Christmas. My brother was proving pretty competent with the Shay Given figure.

Perhaps you remember Manchester United’s 5-0 demolition of Wigan last year with a smile on your face. Berbatov grabbing an extra gift in the form of the match-ball after a sterling display and a hat-trick completed from the penalty spot.  Or maybe Aston Villa, coming from two down against Arsenal to earn a draw in injury time through Zat Knight in 2008. Between them the two teams hit the woodwork four times and the ball was cleared off Arsenal’s goal-line twice, once in acrobatic fashion by Bacary Sagna. A great game that takes place on Boxing Day always sticks in the memory.

Ironically, to mirror the beginnings of the tradition, the last properly meaty derby on Boxing Day was also in Sheffield, and it was meaty enough to feed the whole family on Christmas day. Wednesday and United had not played a competitive game in eight years; the Owls’ descent to the fringes of division four coinciding with United’s tenure in the top flight. But by 1979, the Blades had fallen to division three, while Wednesday, under Jack Charlton’s tutelage were finally on an upward trajectory.

Derby day arrived with United top and Wednesday fourth and there was huge anticipation for the fixture. When the turnstile tallies were counted, they read 49,309; a record for the third division. Wednesday won 4-0 and Terry Curran, who played for both Sheffield clubs during his career, recalls the genuine hostility between the sides, with threats of broken legs and worse as the players lined up together. The on-pitch presence of Sheffield- born players, and a ‘take-no-prisoners’  team talk from Charlton pre kick-off stoked things further.

No Boxing Day can quite match that of 1963 in footballing terms though, when 10 first division games produced 66 goals. There was a 10-1, an 8-2, two 6-1s, a 4-4 and two 3-3s as well as three hat-tricks and three four goal hauls. I’m not sure the boys in the Soccer Saturday studio could deal with that this year. Jeff might have a heart attack.

What have we got in store this year then? There’s a full schedule in the Premier League but the only real derby of any description is West Ham at Arsenal, and that’s hardly thought of as one of the testiest ties on the calendar. Allardyce will be hoping to recast the spell he seemed to have over Wenger for a while as Bolton manager; his direct and robust style is exactly what Arsenal don’t like ‘up them’. Chris Hughton’s Norwich are a team in red-hot form at the moment and they’ll have the chance to take advantage of the fixture congestion problems Chelsea have returned home to after their failed campaign at the Club World Cup. Chelsea were actually the last team to beat the Canaries in the league way back at the start of October.

Further down the leagues, I’ll be at the Reebok for the visit of Sheffield Wednesday, but the standout tie in The Championship is surely the early kick-off between Nottingham Forest and Leeds. Both clubs have been successful at the highest levels before and harbour dreams of getting back to the big-time this campaign. With such rich histories, their fans will appreciate the tradition of festive football as much as any others. In League One, a Bury supporting mate of mine reassures me that their game at Preston is the biggest one of the season. Finally, in the Conference, two of the top performing teams of the season so far, Forrest Green and Newport, meet at the New Lawn. No matter what level your team plays at, three points can’t come down everyone’s chimney.

I don’t think anybody can see the scoring records of ’63 being challenged this year, but you’ve got to admit it, you’re looking forward to Boxing Day football aren’t you? Me too. Long may it continue.