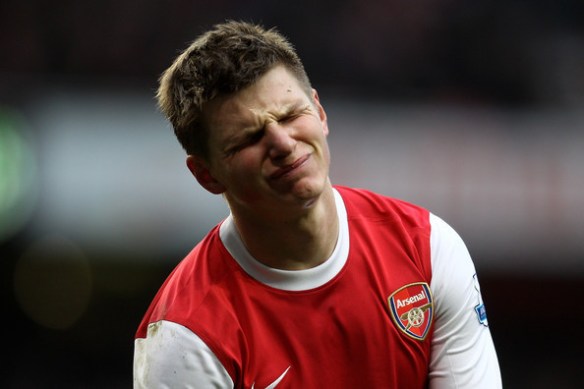 An interesting bit of trivia emerged just before Arsenal’s Capital One Cup Quarter Final away at Bradford. If a certain player had travelled to Yorkshire that night, he would be returning to the site of his professional debut.

Andrei Arshavin, of all people, had come on as a first half substitute for Zenit St. Petersburg in their Intertoto Cup match against Bradford City back in 2000. In his Zenit days he seemed to have the world at his feet; in 2012 he was not even employed on the bench, forced to watch on from elsewhere as his side crashed out of the cup on penalties to League Two opposition.

And yet for all the frustration and unfulfilled potential that Arshavin embodies, he has still been at the centre of some of Arsenal’s more enjoyable moments since that infamous last trophy in 2005. The four goals at Anfield, the winner against Barcelona in 2011 and numerous other flashes of sheer jaw-dropping skill. A deadline day signing in January 2009, Arshavin immediately endeared himself to Arsenal fans with one little phrase: “I am Gooner”. Whether he intended to use that particular nickname, a badge of honour in one half of North London, it didn’t matter; the diminutive Russian was the sort of star the crowds at the Emirates had been craving.

Arshavin arrived as one of the stand-out performers of Euro 2008. Although he missed the first two matches due to suspension, a goal against Sweden in the final group game and a virtuoso display against Holland in the Quarter Final made him hot property. He had also played a starring role in Zenit’s UEFA Cup-winning side the same summer, winning the Man of the Match award in the Final against Rangers. Bids from Barcelona and Tottenham were rejected, only for Arsenal to pounce in the January window. 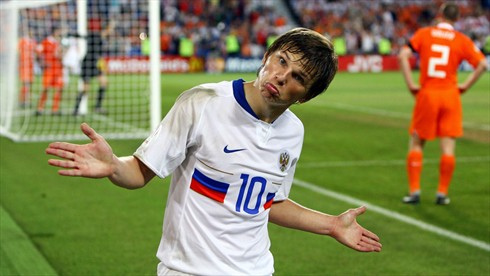 He was a revelation in his first few months at the club. Showing promise in his first few games, Arshavin truly announced himself with his first Arsenal goal against Blackburn in March. Receiving the ball on the wing, he cut inside, beating the defender with a step-over before scoring from the most improbable of angles. Then came the four-goal barrage at Anfield. While Arsenal ended up drawing 4-4 that night, each of Arshavin’s goals was sublime. He became the first player to score four at Anfield since  Dennis Westcott of Wolverhampton Wanderers in 1946, a remarkable feat. He won the Premier League Player of the Month Award for April too. This was Arshavin in his brilliant pomp; he played with the sort of audacity that meant in the eyes of fans, he could do no wrong.

But it was this swagger, this bombastic manner that would be the start of Arshavin’s undoing at Arsenal. Yes, there have still been some moments of vivaciousness over the years but he has never been able to recapture the form of that first half season at the club. Why was this the case? Much of the blame must fall on the player himself. Time and time again, Arshavin would be caught napping and lethargically mope back, offering no cover for the full-back (more often than not, the rather suspect Gael Clichy). This was a source of immense frustration – if this Arsenal team was to get anywhere, every player had to work for each other.

Russians have had a troubled recent history playing in England. Bar Andrei Kanchelskis, a Russian is yet to really light up the Premier League. The other players to earn a move to England off the back of Euro 2008 similarly failed to make an impact. Roman Pavlychenko, who signed for Tottenham Hotspur for a fee of £13.7 million in 2008, was perhaps unlucky; he had a decent record at Spurs (42 goals in 113 appearances) but struggled to establish himself amongst competition from Robbie Keane, Jermain Defoe and Peter Crouch. Yuri Zhirkov became the most expensive Russian player ever when he signed for Chelsea in 2009 for £18 million. Plagued by injuries in both knees, Zhirkov’s time in West London was not a happy one. Finally, Diniyar Bilyaletdinov, despite an encouraging first season at Everton, was quickly marginalised. Like Arshavin, he appeared to struggle with the physicality of English football. All three have since returned to Russia. 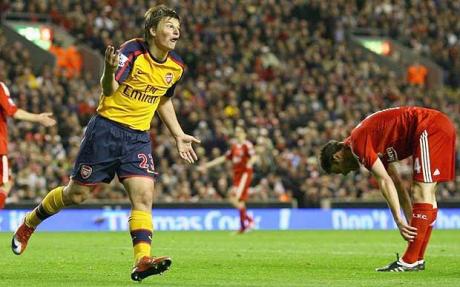 Yet Arshavin’s story is particularly personal and poignant. After the highs of 2008-09, both for club and country, he suffered a major blow when Russia failed to qualify for the 2010 World Cup. Arshavin was captain and after the national team were defeated by Slovenia in the qualification play-off, he came under immense criticism at home. His love for the game seemed to die overnight. He had once been a swashbuckling dynamo; now he trudged about the pitch, his desire completely gone.  Speaking to Moscow News, Marc Bennetts (author of the superb Football Dynamo) said, “He just hasn’t regained his passion for football since Russia were beaten by Slovenia in the playoffs for the 2010 World Cup. He even admitted he’d lost a lot of appetite for the game after that match.”

In a surprisingly open interview for Arsenal’s official programme, Arshavin talked of his regrets at the club. With shattering honesty, he said, “Normally when I’m on the pitch I take control of a game, but I haven’t done that here. I’m an extra tool in the team rather than the main one, so it’s been different.” It’s sad to see a player of such talent experience such a drop in confidence. He should have enjoyed the peak years of his career at Arsenal; now he is not even a certainty to make the bench.

There have been some signs of his former self this year. His return on loan to Zenit this January yielded 3 goals and 4 assist in 10 league appearances, a satisfactory memento of the Arshavin of old. His Euro 2012 campaign got off to a promising start too, playing an instrumental role in Russia’s 4-1 win over the Czech Republic. However, it was not to be. Having orchestrated a dominant first half display in their next game against Poland and providing the assist for Alan Dzagoev’s openening goal, the profligacy of his team-mates came back to haunt the Russians.

On 57 minutes Arshavin, with the ball at his feet, steamed forward. The Polish defence was over-run and the Russian had three un-marked compatriots to choose from; his eventual pass was lazily under hit and easily intercepted. The Poles broke, and Jakub Blaszczykowski scored one of the most memorable games of the tournament. Arshavin, still bemoaning his lethargy, had not crossed the half-way line. It summed up both his and Russia’s tournament. It could so easily have been 2-0 and qualification to the knock-out stage; Arshavin’s stray pass precipitated a dramatic Russian collapse and they somehow contrived to lose their final game to Greece despite unleashing 28 shots on the Greek goal. 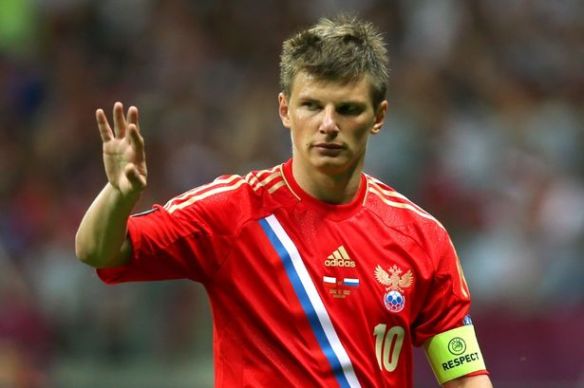 Russia finished 3rd and were knocked out, with Arshavin seriously souring the mood with his comments. Although he later apologised, speaking about letting down millions of supporters, he told a journalist, “If we did not fulfil your expectations, then honestly, these are your problems”. Some might also point to Wenger’s apparent refusal to play Arshavin in his ‘natural’ position at central attacking midfield as a reason for his subsequent failure at Arsenal. While this is the position he often occupies for Russia, he has shown is more than capable of playing on the wing and it is simply a case of effort and attitude that has inhibited his performances.

Diminutive, enigmatic and outspoken, Arshavin’s time at Arsenal has certainly been an entertaining one and by the sounds of it is nearing its conclusion. For all the frustration he causes, behind the complex exterior lies a highly talented footballer. One feels in years to come he could occupy some sort of cult status at Arsenal. There is something of the John Jensen about him, another player signed off the back of a great Euros who failed to live up to expectations. The Danish midfielder was bought after his country’s Euro 1992 success, in which he scored in the Final. In 138 Arsenal appearances, Jensen scored just once – remembered fondly by fans who made t-shirts with the slogan ‘I was there when Jensen scored’. While Arshavin has rather more goals to his name than that, his time at the club has been no less exasperating.

5 thoughts on “The Mystery of Andrei Arshavin”