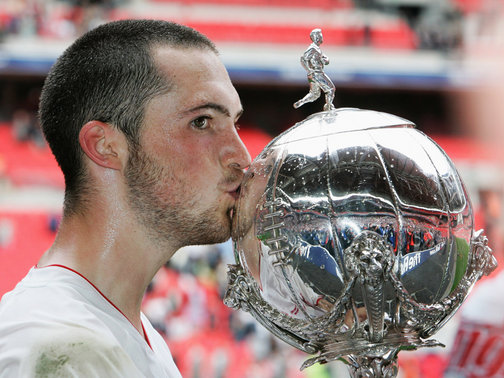 False Nine editor, Andrew Belt, visits Stevenage and finds a club mourning the premature death of one of their former stars…

The club flag was at half-mast.

Every Stevenage player wore a T-shirt with ‘Mitchell 21’ on it.

A minute’s silence was impeccably observed before the game. 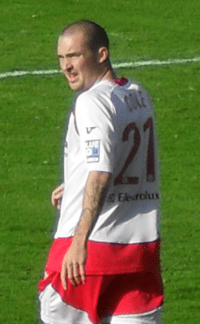 Aged just 27, Mitchell Cole passed away on 1st December, having retired from professional football in 2011 on medical advice as a result of a deteriorating heart condition.

Last Sunday, Fabrice Muamba’s miraculous story was retold at the awe-inspiring 2012 Sports Personality of the Year awards ceremony and illustrated the knife-edge nature of playing a professional sport with a defective heart.

Some are saved before it’s too late, others are not so lucky.

No one needs reminding of the extraordinary circumstances of Muamba’s sudden cardiac arrest at White Hart Lane in March of this year and his subsequent recovery from a near-fatal heart attack but the incident had a big effect on Mitchell.

Upon watching Muamba’s misfortune, Cole is said to have remarked that he would give up football altogether. At the time, he was playing for semi-professional outfit, Arlesey Town, having given up professional football for the sake of his health only a year before seeing the horror unfold.

Reports claim Cole played football with his friends the night before he died but whether or not this was the case, clearly the brother-in-law of Liverpool midfielder, Joe Cole, was on the receiving end of a life-threatening condition that ultimately killed him before his prime.

Cole discovered he had a heart condition when he was 17 and at West Ham’s youth academy but as his condition gradually improved he was able to continue playing and he had notable stints at Grays Athletic, Southend United, Northampton Town and, latterly, Oxford United.

But undoubtedly, Cole’s best football contributions were made when at Stevenage Borough – who lost Borough from their name in 2010. In three years at the club, Cole scored 23 goals from 146 appearances for the then non-league Hertfordshire outfit.

A considerable effort and one not lost on all associated with Stevenage Football Club. Playing their first home game since the news of Cole’s death had broken, the club paid homage to a player who had been a key component of Graham Westley’s promotion-winning side in 2009-10. 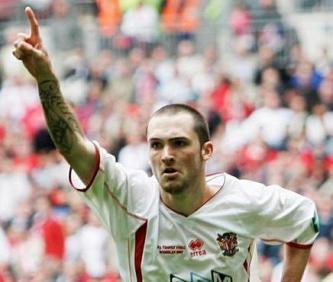 Several mentions of Cole’s goal that began the comeback in the 2007 FA Trophy final against Kidderminster Harriers – widely acknowledged as the midfielder’s greatest moment on a football pitch – were made throughout the afternoon. Losing 2-0 at half-time, Cole’s neat finish shortly after the interval spurred Stevenage on to become the first team to win a competitive final at the new stadium, in front of 53, 262 fans.

He went on to win the FA Trophy with the club again in 2009 before having a big part to play in the 2009-10 promotion season; his last with Stevenage. Spandau Ballet’s ‘Gold’ was reworded by the Stevenage faithful to incorporate Mitchell’s name into the song at regular intervals and, in the 21st minute, applause came from all sides of the stadium to mark his wearing of the 21 shirt while at Broadhall Way.

Crawley Town fans, too, chanted Mitchell’s name of their own accord and Cole’s family, who were in attendance, would surely have been touched by the tributes to one of Stevenage’s own. From a personal point of view, the only other time I had witnessed such raw emotions at a football match was when Gary Speed was honoured at Elland Road last year versus Millwall. Both men gone too soon.

The match itself was a drab affair but fitting that a League One fixture could accommodate two teams more used to the less glamorous confines of non-league football; where Mitchell made a name for himself.

It’s almost staggering that both Stevenage and Crawley are vying for promotion to the Championship. In their second year in the division, Stevenage show no signs of being out of their depth and it is testament to players like Cole that the Boro had the opportunity to compete in the Football League and reach such dizzy heights. 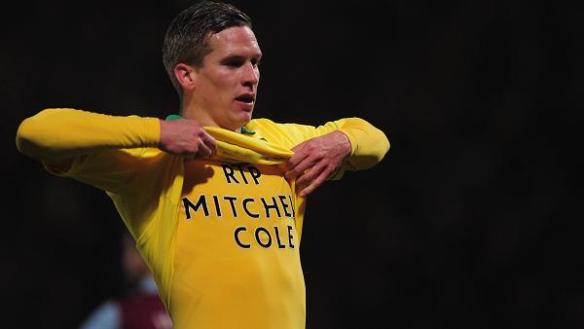 Stevenage chairman, Phil Wallace, was present throughout Cole’s time at the Boro and went on to say, “It’s such a sad, tragic loss of a young life. Mitch was a key figure for us in the seasons that saw us enjoy a lot of success. We all knew of his condition but it’s simply devastating that a young family with such spirit is taken from us so suddenly.”

Cole leaves behind three children, the third of which was born six days after his death, in what must be a terribly difficult time for his family.

The tributes painted a picture of an enthusiastic man who gave so much joy to others and Wallace announced that a benefit match for Cole will be played at Broadhall Way in May 2013.

At Stevenage, his legacy lasts on.