Who remembers the Olympics? They were great weren’t they? That now iconic fortnight when the country soaked up the sun and basked in the world’s spotlight; when London temporarily justified its self-gratifying tagline as the centre of the known world.

Everyone goes misty-eyed at the mere mention of London 2012; a memory that now nestles in the sub-conscious alongside family weddings, memorable birthdays and that nostalgia associated with a child’s first World Cup.

The Games of the 30th Olympiad excelled themselves, simultaneously eliminating pre-conceptual alienation and transcending socio-cultural differences. Popular narrative would have you believe that they were ‘the best ever’.

To resort to hyperbole in relation to the London Olympics not only distorts our perceptions of that grand fortnight, but does a grave injustice to those that preceded it. Simply because the 2012 Olympics took place within our own nation should not gravitate it above its predecessors Beijing, Athens or Sydney.

Similarly, the Barclays Premier League suffers from the same inexplicable grandiosity. Sky Sports has long served its viewers a diet of over the top aggrandizement as it force-feeds its oversized baby to a baying public. Andy Gray spectacularly popularized a long-running myth that Lionel Messi would never lay claim to being the best in the world if he were unable to produce the goods on a cold Wednesday night in Stoke.

Sky would have you believe that it was old-fashioned, rough and tumble outfits like Stoke City that make the Barclays Premier League the greatest in world football.

This patently ridiculous notion is symptomatic of a problem that has festered in English football in recent years; complacency. Naturally, this has coincided with an undeniable and irrefutable weakening of Barclays Premier League sides in European competition.

No longer is it marketed as ‘The Best League in the World’, as it had been continually between 2007 and 2009, a period in which the Premier League provided nine of twelve Champions League semi-finalists. Instead, pundits and analysts are seemingly contractually obliged to now label it as ‘The Most Exciting and Competitive League in the World’; an attempt to disguise the fact that since 2010 it has provided just two out of twelve semi-finalists. 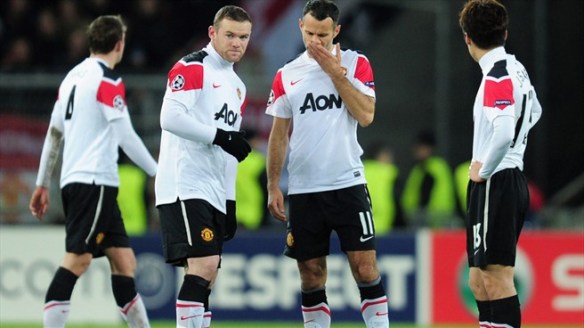 Such statistics lay bare the very real and irrefutable deterioration in the overall standard of football in the Premier League, something which continental competition has come to ruthlessly expose. On the European stage the Premier League’s former big four – Arsenal, Chelsea, Liverpool and Manchester United – exuded control, authority and discipline. Between 2005 and 2009 they played 120 group games, losing just 13 and keeping a total of 48 clean sheets. Since 2009-10 these impressive figures have dwindled, with Liverpool since being replaced by Tottenham Hotspur and latterly Manchester City; 72 group matches, 14 defeats and 28 clean sheets. This season has reflected a significant downturn; 20 matches, six defeats and only three clean-sheets.

Manchester United, humbled last season in a group consisting of Benfica, FC Basle and Otelul Galati, have again been unconvincing against Galatasary, CFR Cluj and Braga. Similarly the shortcomings of Arsenal’s strength-in-depth was exposed at Olympiakos; a side that consisted of eight full internationals yet a team-sheet that read like a list of Arsene Wenger’s recent follies in the transfer-market.

The embodiment of this shambolic decline are the current English champions, a squad worth in excess of £320 million, and with ambitions of joining the European elite, now hold the ignominious record of being the worst English team in the competition’s history. Eclipsing the four-points that Ray Harford’s Blackburn Rovers amassed in 1995-6, Manchester City claimed three points and no victories from their group stage travails in 2012-13. 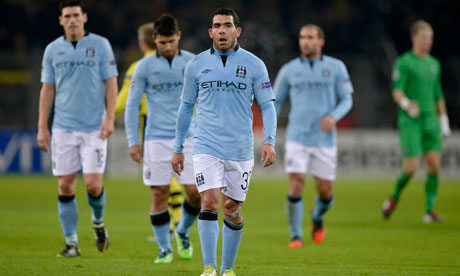 Some commentators would point to the obvious strength of their Group D opponents; Borussia Dortmund, who had underwhelmed in Europe last season, have taken the tournament by storm this year, whilst Real Madrid and Ajax retain illustrious histories in the competition. However City, and more alarmingly their manager Roberto Mancini, have looked chronically out of their depth over the course of consecutive group stage eliminations. In the process the Champions of England have been comprehensively outplayed by a selection of the most talented squads across Europe – Bayern Munich, Napoli, Real Madrid and Borussia Dortmund.

Chelsea’s incomprehensible victory in Munich in May masked what was a torrid campaign for English teams in the 2011-12 Champions League. Both Manchester teams were unceremoniously knocked out at the first hurdle, whilst Arsenal were roundly thrashed by AC Milan in the Last 16.

The resilience that underpinned Di Matteo’s Chelsea in European football last season disappeared in a group comprised of formidable Italian champions, Juventus, and the silky Ukrainian champions, Shakhtar Donetsk. Yet it is inviting to believe that a Chelsea of yesteryear, under either Jose Mourinho, Guus Hiddink, Carlo Ancelotti – even Avram Grant – would have negotiated through the pitfalls that befell Di Matteo. 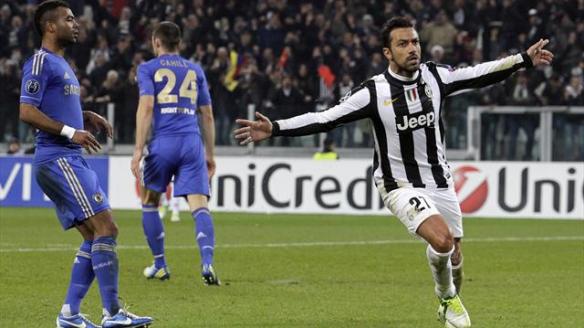 For the second successive season, only two English clubs have progressed to the knockout stages of the European Cup; you have to go back to the 1999-2000 season to find the previous case, back in the days before four English entrants.

English football is not what it has been built up to be in the past and underpinning the deterioration in quality of the top English sides in Europe is a general malaise of quality underneath it. The Europa League has become a breeding ground for some of the finest second-tier sides across Europe; Atletico Madrid, Athletic Bilbao, FC Porto, Shakhtar Donetsk, Zenit St. Petersburg, whilst its finest exponents have included Radamel Falcao, Diego Forlan and Edison Cavani.

English observers have continually associated the competition with a mirth, contempt and disdain that it does not deserve. Last season Harry Redknapp did all he could to avoid Tottenham Hotspur progressing in the competition, yet who could argue that Atletico Madrid’s recent success has harmed their long-term prospects?

Atleti currently sit second in La Liga – yes, that Spanish league often derided for being nothing more than a stomping ground for Barcelona and Real Madrid – whilst Falcao’s astonishing record in the Europa League of 29 goals in 28 appearances, stretching back to his spell at FC Porto, has catapulted the Colombian’s reputation into the company of some of the greatest players in world football. 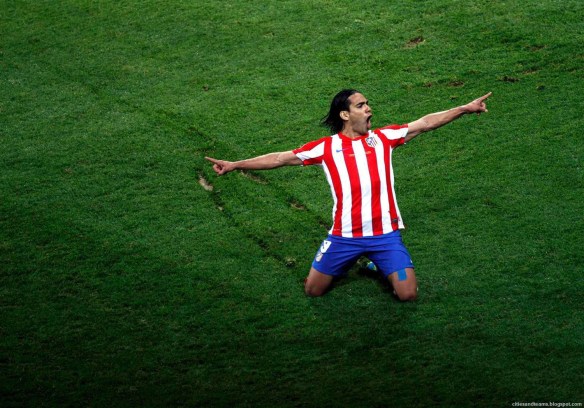 Falcao epitomises the strength in depth of La Liga

Disdain in this country for a competition that supposedly harms the prospects of teams seeking to break into the Champions League has contributed to the rise of mediocrity in the middle-rungs of the Premier League. No club quite exemplifies its declining standard as the current Liverpool side which bestrides mid-table mediocrity.

Entering December, the Merseysiders sit 11th in the League table, finding themselves equidistant from the top four and the bottom three. Notions that a side, which has won just four league games and scored a pitiful 19 goals in 15 games, harbours a genuine chance of reaching next year’s Champions League is patently ludicrous, yet it is not so absurd as to be entirely implausible. Sky Sports would label it as proof of the ultra-competitive nature of the Premier League, when in actuality it points to a vacuum of quality.

That the two Manchester sides, who have looked far from convincing all season, have opened up a seven-point gap on their nearest rivals and turned the title-race into a two-horse race before Christmas testifies to this. Audiences may prefer the unpredictable nature of the Premier League below the top two, but the league was in a far healthier state when the top positions were tediously predictable.

Exciting score-lines that have become common-place in recent seasons – 8-2, 1-6, 3-5, 4-4, 3-3, 5-2, 3-4 – have masked the reality that the Premier League is increasingly composed of mediocre football teams, who can no more defend competently as put together a consistent run of results.

For the first time in Champions League history, three Bundesliga sides qualified for the knockout stages as group winners. The legacy of German football’s grass-roots upheaval at the turn of century is bearing fruit in stunning fashion – continental success and international wizardry matched with a domestic scene that is the envy of onlookers aplenty, both on and off the field. 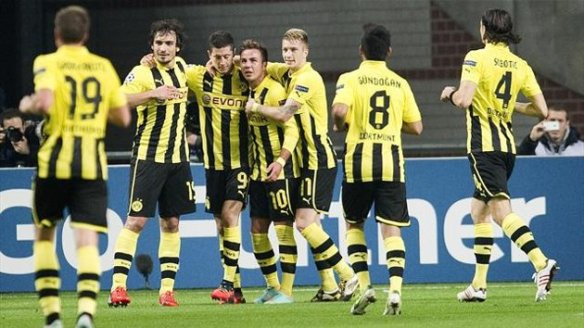 If the decline of English clubs reaching the latter stages of the Champions League were to continue, then English football would face the full consequences. UEFA’s coefficient system may be met by derision in many corners, but there is a very real possibility that the number of English entrants could decrease in the near future.

Only the top three performing leagues in Europe qualify for the highest number of Champions League entrants; with the German Bundesliga and Italian Serie A gaining in strength and the Spanish La Liga perpetually dominant, possibility could become reality.

The statistics do not lie. The Premier League is not the best in the world; no amount of relentless marketing and incessant propaganda from Sky Sports can continue to disguise that fact. Whether it is the most exciting in the world is a view that is open to interpretation and semantics.

Some may view ‘exciting’ as a 0-0 draw that resembles a tactical game of chess, whilst others would view it as an end-to-end 4-4 with players navigating the pitch like headless chickens. The comical first-half between Reading and Manchester United at the Madejski Stadium last weekend was hardly a showcase of blistering attacking play and finishing, but of a paucity of defensive solidity and tactical nous.

English footballing principles have abandoned their once renowned defensive qualities and, as a result, the goals have flowed. Though the quality may be deteriorating the entertainment factor certainly remains – little wonder then that the Premier League has negotiated an unprecedented new lucrative TV deal for the start of the 2013-14 season.

As the Premier League’s monopolization of English football continues unabated, so people will continue to bury their heads under the sand with the pretense that television deals and entertainment are the ultimate gauge of a product that continues to enthrall. In reality, English football is suffering, and were ‘entertainment’ and ‘competitive’ to continue as by-words for mediocrity it could well become an epidemic.

Perhaps this is overly cynical. The Premier League may have lost some of its cutting edge, but the drama and passion remain; albeit as the product of chaotic entertainment, rather than of the finest footballing export in the world. A worldwide audience will feast on the Manchester derby this weekend and the crass soundbites will continue, but, like London 2012, don’t believe the ‘best in the world’ hype.