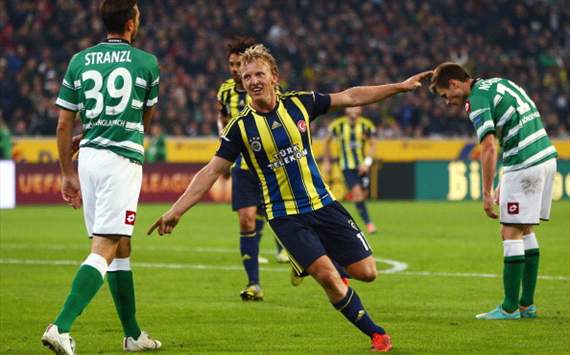 The Anfield Wrap writer Steve Graves makes his debut for The False Nine, looking at Dirk Kuyt’s transition from a squad player to a key cog in Fenerbache’s assault on the Turkish league title…
“Are we going to win the cup, Dirk?”

It wasn’t the most forensic of questions, but the response was emphatic.

This was March 2012, and Kenny Dalglish’s second spell as Liverpool manager was fraying at the edges.

The promise of the previous spring, the hard-fought league cup win inspired in no small part by the man standing before us, the high hopes we had of pragmatic new owners marrying US sports industry nous and traditional Liverpool values. All had begun to dissipate.

In three words, Kuyt took our semi-starstruck, garbled question and offered us back something profound.

To the end, this was a man who got it. Got the club, the fan culture, the prevailing mood. He saw, I believe, the regime staggering under the weight of expectation, of the Suarez-Evra affair, of expensive signings performing well below their apparent potential.

Kuyt knew things weren’t right, though having been relegated to the fringes of the first team he was stripped of much of his power to change them.

Fast forward to May, and Liverpool are giving Chelsea the equivalent of a free hit for 60 minutes at Wembley.

The FA Cup final team look under-prepared, nervy, lacking any sense that the 11 men chosen to carry the club’s standard can either diagnose or solve their manifest problems.

There is a place in this side for Jay Spearing, yet not for a World Cup finalist with a Champions League final goal to his name.

This is when we know for sure what we’ve suspected deep down. Dirk Kuyt, central pillar of the club’s most successful recent period, scorer of vital goals, walking refutation of every half-cocked anti-footballer prejudice, will be leaving Liverpool.

We were right. After seasons of consistent service punctuated by frequent, brilliant high points, Kuyt made his way to Fenerbahce. 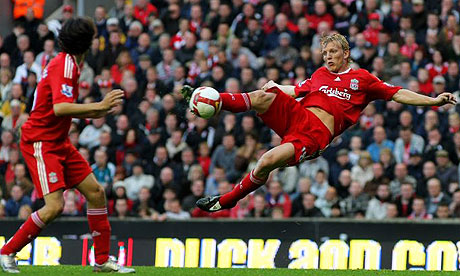 The sacking of Dalglish made little difference, Kuyt’s mind clearly made up that the time had come to activate the £1million release clause mystifyingly included in his contract. Meanwhile, Liverpool owners FSG may well have been happy to see his international-sized weekly wage taken off the books.

For a while there was speculation over where he would choose to go. A comparatively easy (and lucrative) ride in the US, Asia or Australia? A return to familiar surroundings at Feyenoord?

At 32 and with many wondering aloud about his ability to maintain his characteristic high-energy approach to the game, he’d have been forgiven for taking one of these comfortable options.

Yet Kuyt, never one to go easy on himself, surprised many with a move to Fenerbahce.

The Istanbul side may have missed out on the Super Lig title last season, but remain one of the fabled ‘big four’ of Turkish football.

Little has gone to plan for Krasic, but Kuyt has settled in supremely well.

In mildly surreal scenes, thousands gathered at the club’s Şükrü Saracoğlu Stadium simply to see the new signing pen his contract and perform a few keep-ups.

His first competitive game, the Super Kupa derby with Galatasaray, saw Kuyt score, wind up a crowd already in foment (Turkish football’s default setting), and appear to enjoy his football more than at any time since his winning goal against Manchester United in January.

The following weeks brought a series of big goals, Kuyt thumbing his nose at the concept of acclimatisation as he established himself as one of the league’s top performers. If he wasn’t scoring he was linking up well with the livewire Moussa Sow, rediscovering the all-round forward play which had made him one of the most sought-after strikers in Europe before his semi-conversion to the right-hand side at Liverpool.

Then an uncharacteristic injury struck, ruling him out for several weeks. It’s no coincidence that Fenerbahce’s form suffered, nor that since his return to the team (ahead of schedule), they’ve risen up the table. His intelligence, movement and drive were sorely missed.

Recently Kuyt gave his first press conference in Turkish, winning praise from journalists for his grasp of the language. From personal experience, it’s not easy to master, but Kuyt has clearly been putting the hours in. Rather than spending his time off injured on holiday or messing about on FIFA, Kuyt was hitting the books.

But this is what Dirk Kuyt does. He competes, he works, he fights for every marginal gain. He commits to everything with every ounce of his physical and mental energy, focusing relentlessly on what it takes to win.

Because, quite simply, he has to.