False Nine writer, Matt Malone, tackles the issue of diving, which took up many column inches and press conferences this weekend, and asks for more understanding of a trait of modern football that’s increasingly difficult to officiate…

Whilst the issue of diving has always been a serious bug bear of managers across the country, in recent weeks it seems to have gone into overdrive and now, particularly after the incidents of the most recent round of Premier League fixtures, finds itself almost perennially on the back pages of most newspapers. Now so notably in the front of the minds of most people connected with football, it must be addressed and the FA must clarify its guidelines regarding what is described in Law 12 of the Laws of Association Football as an ‘attempt to deceive the referee by feigning injury or pretending to have been fouled (simulation)’.

One thing that is abundantly clear is that a number of football players, managers, fans and journalists see this as a very black and white issue; it must be made clear that it is not. The fallout out from Fernando Torres’ red card against Manchester United highlights this perfectly. Following the game, all debate surrounding the alleged dive focussed on the contact made by Jonny Evans on Torres as he attempted to break through on goal. Was there contact made? Was that contact enough to bring the striker down? These questions were addressed by both players involved in their post match interviews and also by both managers when asked. Inevitably in the partisan world of football, each saw the incident in a way that favoured their team, but regardless of this they all spoke, as have the some commentators since, with a huge misunderstanding of the laws of the game. 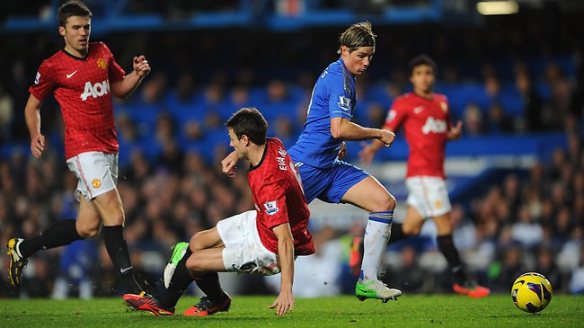 To return to Law 12 of the Laws of Association Football once again, it states that a foul is committed when a player ‘trips or attempts to trip an opponent’ or ‘kicks or attempts to kick an opponent’. This wording, so often overlooked in the debate about diving, is crucial as it means, unarguably, that contact does not need to be made for a foul to have been committed. This surely should shape the way the debate it has. For one thing, it would probably mean that watchers of football would no longer have to spend twenty minutes after each game glued to Sky Sports as they show a super slow motion replay of every incident to find the moment of contact in a controversial tackle.

This writer will at no point cast a judgement on any specific incident that has served to stoke up the flames of this debate. That is the job of the referee and then, in a wider sense, the FA. However, what must be done is that these incidents must be looked at in a different light. No longer should the first question that fans ask be ‘Was there contact?’ Instead, the only thing that must dictate whether something is labelled a legitimate foul or an act of simulation is whether or not the attempted tackle of a defender carried enough force to make a player go down without a conscious attempt to win a foul.

Gareth Bale, despite some questionable tumbles in recent months, made the very legitimate point when challenged on his propensity to go to ground that when you are moving at pace and a defender standing over six foot tall and weighing 15 stone slides towards you with eyes for the ball and with no regard for your safety, sometimes the natural reaction is to go to ground. In no way is this statement meant as a slight to any defenders out there. This, in fact, is the fundamental quality of a good no-nonsense defender. However, it cannot be questioned that there is an attempt in these tackles to trip or kick the attacker. Once the ball has been missed due to mistiming or the trickiness of the attacker, a foul has been committed. This clarification admittedly only complicates the issue further, but that is something that is necessary if this issue of simulation is ever to be solved. Quite simply, there is no easy way to solve it as there is no easy way to spot a dive.

If the debates surrounding diving are framed in a way that fully understands the laws of the game, then it becomes immediately clear that this is no black and white issue. In fact, it is an issue that is virtually impossible to remove from the unhelpful and uncertain grey areas. It is for the FA to decide appropriate action to take, but all fans and followers of football must, for the time being, give referees a break. The pace and intensity at which the game is now played at the highest level, coupled with the caveat in the law book that intention causes as much of a foul as contact, means they have an already difficult enough job to differentiate between a foul and an act of simulation. Perhaps an acknowledgement that a referee does not have a super slow motion camera to study several times after the incident when he makes his decision would be helpful. In reality, to judge with absolute certainty if a player goes to ground naturally or as a deliberate attempt to dupe the referee is nigh on impossible. There is no way to change this fact, as football fans all we can do is have more faith in the years of experience and training every Premier League referee has.