This week, news of John Terry’s international retirement and racism trial hijacked the back pages of red tops and broadsheets alike. Implicit in the number of column inches dedicated to these stories is more evidence -as if it were needed- that the Premier League’s mass appeal draws interest like nothing else. Terry’s actions again demonstrated that we now live in an era in which no lips go unread, and no World Cup is more important than club football.

It is forgivable, then, to think that the newly rebranded Capital One Cup becomes increasingly overlooked in the face of the Premier League’s exponentially increasing brand dominance. Indeed, those incisive footballing wits who still refer to the competition as the ‘Mickey Mouse Cup’ probably wonder if it has any place in football at all. But, there is certainly one group of fans who would disagree.

For a long time now, people have grown accustomed to seeing the Premier League’s bigger teams, who this week entered the League Cup, start youthful sides: it has become as much of a staple in recent seasons past as the idiocy of our beloved former England Captain. The logic is simple; youngsters gain experience, yet the team’s chances of progression are, at least initially, not radically reduced. It seems like a good deal for all concerned.

However, one annoyance that this increased exposure to young players inadvertently brings is the latest stream of ‘ones to watch’. More so than before, prospects are being talked up from impossibly young ages, as certain fans delight in propounding the virtues of ever-more obscure players. While that might sound deliberately cynical, the people who continuously talk up the merits of youth teamers become as tedious as those who think they can microscopically dissect a manager’s tactics or a club’s finances (leave that to Michael Cox and the Swiss Rambler, respectively). It seems as if these fans no longer delight in the actual fruition of young players, such is their profound emphasis on unearthing the next one. It is a cycle that never culminates; much like the Trans-Atlantic hipsters who slavishly dedicate every waking hour to promoting the technical merits of an obscure DJ, only to ditch them once they become too popular.

At Arsenal, for example, youth-team footballers are subjected to fan hype at a frighteningly young age. As such, the club possesses a certain group of supporters who, probably more than any others, believe that the promised success of tomorrow will nonchalantly march in from the youth teams, taking a plethora of trophies en route.

The reality is quite different. Alex Oxlade-Chamberlain had barely one season of protected ‘prodigy’ status, before he became subject of the fans’ (albeit mild) impatience in this weekend’s home game against Chelsea. It appears that, in the collective consciousness, he is now fair game for the sort of frustration that once was reserved for seasoned campaigners or inept reserves. As for Theo Walcott, perhaps the most underwhelming ‘prodigy’ of recent years, his contractual situation has rendered him comparable to a baby sitting in a stale nappy. Long term, there is the slim hope of realising his potential, but for now, with coach and fans alike, he really is in the shit.  Incidentally, but by no means unrelated, Serge Gnabry is the new flavour of the month, after his mid-week League Cup outing. He is now the one being spoken of in clandestine tones as Arsenal’s ‘next big thing’. As such, he now carries the hope of the club’s blindest believers. 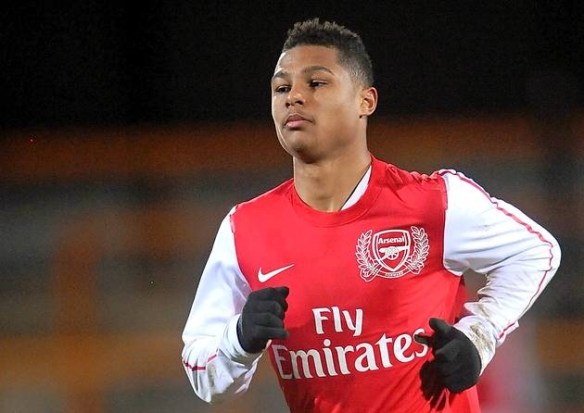 Serge Gnabry: ‘flavour of the month’ at Arsenal

For what it is worth, Chelsea fans themselves are similarly conflicted. Supporters are already slavering over Lucas Piazón, after his tidy performance against Wolves, but what about Josh McEachran and Gaël Kakuta? These are yesterday’s stars of tomorrow. Every major club has at least one.

In an event akin to hell freezing over, Steven Gerrard said something interesting this week. More pertinently, it was on the very subject of youth exposure:

‘The difference from when I was at the academy to now is [that] the fans already know about the kids at the academy; they watch them on the TV, whereas, when I was coming through, no one knew anything about me. I was a surprise.’

Herein, it is evident that in roughly 15 years, since Gerrard first broke into the Liverpool team, the level of attention and exposure that young players can expect has significantly increased. By all means there are earlier exceptions, but for the sheer depth of information on youth teams that is freely accessible, such anomalies are incomparable. Today, four or five players, or to borrow the cliché, a ‘crop’, are frequently touted for great things at the same time.

That is not to say that it is unhealthy for supporters to take an interest in youth development. Youth and reserve games, for the hardy football fan, often fill the gaps between weekends. The latest round of the NextGen Series gave elite European clubs the opportunity to demonstrate the quality of their young players and the idiomatic coaching styles of their academies. In addition, this week, a report commissioned by the European Club Association demonstrated the quantity of resources siphoned off by club boards, expressly for the use and development of their academies. It is the right of every fan to know how their club spends its money, just as it is their right to know how the youth teams are getting on.

Rather, it is a question of priorities. At no point should hopeful passion override ones interest in first team affairs. The inevitable truth about youth teams, barring a miraculous vintage like Manchester United in ’92 or those in the current Barcelona team, is that most of them –especially at the bigger and wealthier teams – will not make it. That being the case, for every one youngster that breaks into the first team, there will be another five who reach the outskirts (the point at which excitement is aroused) but never fulfil what it was originally thought they had. When will the constant search for the next rough diamond stop?

As Ferris Bueller famously said, ‘Life moves pretty fast. If you don’t stop and look around once in a while, you could miss it.’ It is a maxim that is equally applicable to any supporter. So, for those whose obsession with teenagers has reached Nabokovian proportions, check the league tables or turn on Soccer Saturday. Even better, go to a first team game. As any football fan will tell you, hope is a cruel mistress; it is probably best not to invest all the energy of fandom in it.

One thought on “League Cup Breeds Unhealthy Obsession With Youth”